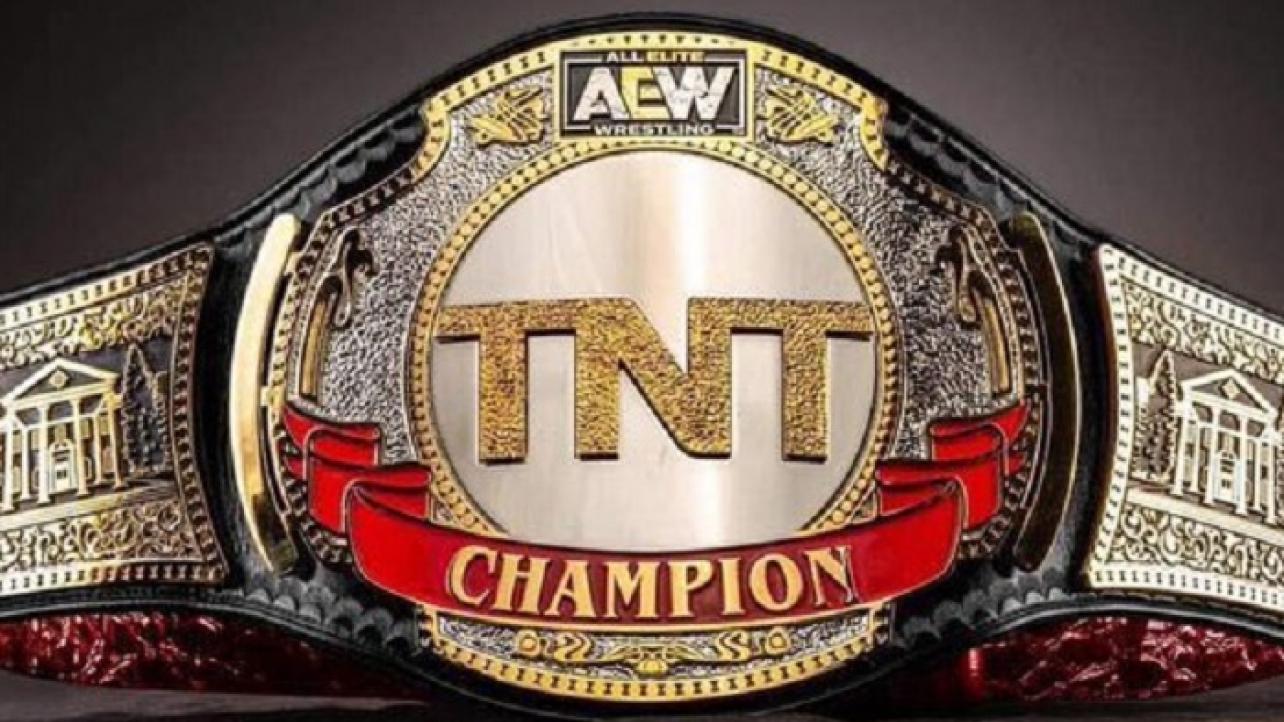 For the third time, All Elite Wrestling has introduced a new design for their TNT Championship title belt.

During AEW Dynamite: New Year’s Smash Night 1 on Wednesday evening, AEW debuted their latest design for the TNT Championship, as “The New Face Of TNT” Darby Allin brought it to the ring with him for the Weigh-Ins for his title defense against Brian Cage at night two of the “New Year’s Smash” two-week special.

This marks the third design for the belt, as a temporary one was first introduced before Cody later premiered the new look red design, which was retired in honor of fellow former TNT Champion Mr. Brodie Lee (Jon Huber) during the AEW Dynamite: Brodie Lee Celebration Of Life special tribute show last week.

Featured below is a complete recap of the weigh-in segment from AEW Dynamite: New Year’s Smash Night 1, as well as photos of the new design for the TNT Championship.

It’s now time to head back down to ringside, as the participants in next week’s TNT Championship showdown between current title-holder Darby Allin and FTW Champion Brian Cage are due to weigh-in.

On that note, as they finish up their respective ring entrances, we are led into a commercial break before the weigh-ins get underway for next week’s title bout between Allin and Cage.

We’re back from the break and as soon as we return, we hear Tony Schiavone introduce the TNT Champion Darby Allin. On that note, out comes “The New Face of TNT” with his new belt in one hand and his trademark skateboard in the other hand.

As he settles into the ring, we hear the commentators and Schiavoe in the ring both pointing out that the TNT Championship that Allin is carrying is the new belt as we all saw the classic red designed title belt retired in honor of former champion, the late Jon “Brodie Lee” Huber on last week’s “Brodie Lee Celebration Of Life” tribute show.

Finally, we get down to the proceedings. Taz does some complaining before things get started. He finishes up his complaint and then we get down to business with Brian Cage weighing in first. Cage has an official weigh-in of 272 pounds. Next to the scales is the champion, Allin, who weighs in at 171 pounds, over one-hundred less than his challenger for next week’s title match.

Allin now gets on the mic. and tells Taz to skip any further crap and let’s get down to business and do what we all know is going to happen before this weigh-in ceremony is all said-and-done. On that note, he drops his mic. and picks up his skateboard, slamming it on the mat and challenging all of Team Taz to fight right here, right now.

Taz is all about this, demanding Schiavone get out of the ring so they can get down to it. As Schiavone does just that, the lights go out. When they come back on, snow begins falling from the ceiling and the familiar sounds of the entrance music of “The Icon” Sting plays and out comes the wrestling legend to the ring to accompany Darby Allin, the man he has had a vested interest since showing up in AEW.

We watch now as Sting aligns himself next to Allin, all-the-while all of Team Taz makes the decision to exit the ring and retreat to the back. As they do, they stop half-way up the ramp and Taz gets on the mic. again, promising that Allin is going to get what he’s got coming to him next week at AEW Dynamite: New Year’s Smash Night 2 when Allin puts his new TNT Championship title belt on-the-line against Cage.

After that, Taz sets the mic. down and all of Team Taz end up heading to the back. After they leave, “The Icon” Sting turns and faces Darby Allin. The two stare each other down as the commentators give one final push to next week’s Allin vs. Cage bout for the TNT Championship

Check out photos of the new look TNT Championship in AEW via the tweet embedded below and/or the article image pictured above.