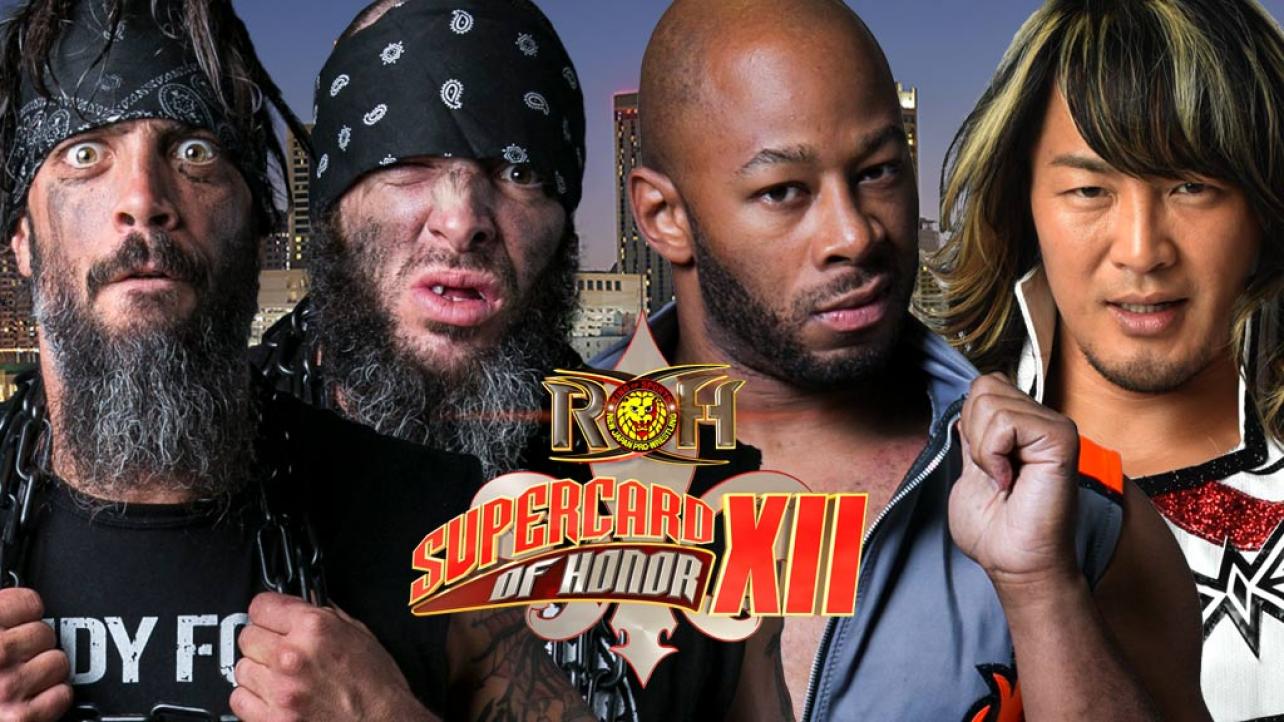 On Tuesday, Ring Of Honor (ROH) announced a new title match for their WrestleMania 34 weekend show.

Officially announced for ROH: Supercard Of Honor XII is a ROH World Tag-Team Championship bout, with The Briscoes going up against Hiroshi Tanahashi and Jay Lethal.

Featured below is the complete announcement from ROHWrestling.com:

The Briscoes have returned to tag team domination in 2017 after turning their backs on Bully Ray and focusing on themselves. At the behest of Jay, he and brother Mark turned their focus to the Ring of Honor World Tag Team Championships once more and unleashed a violent side not seen in years, leading them to their ninth Ring of Honor World Tag Team Championships, the first time they held the championships since 2013.

The “Since Day One” motto is not hyperbole, as Jay and Mark have been ROH tried and true since The Era of Honor Begins at the Murphy Rec Center in 2002. The pair, despite vicious and violent actions, have become iconic in the pantheon of ROH stars and are, perhaps, the greatest tag team in ROH history.

At Supercard of Honor, the brothers will face two of the biggest singles champions in the history of ROH and New Japan Pro-Wrestling, respectively! In New Orleans, we will find out if the whole is greater than the sum of its parts!

Jay Lethal and Hiroshi Tanahashi have formed a mutual respect and a friendship that has crossed international waters over the last few years. The duo teamed with KUSHIDA and Michael Elgin twice in the fall of 2016 to twice defeat Los Ingobernables de Japon before teaming with Juice Robinson at Honor Rising 2017. One of the greatest ROH World Champions, ever, in Lethal and the seven-time IWGP Heavyweight Champion Tanahashi have teamed once before and did so in Dearborn as part of last year’s War of the World’s Tour! But this dream team will have to be at their very best when they take on the record-setting Briscoes!

The Briscoes defeated the Motor City Machine Guns at 16th Anniversary to break their own record with their ninth championship win. The Briscoes have shown an edge, viciousness, and a killer instinct not seen in years and it may take a team formed of two of the best singles champions from two of the most prestigious wrestling organizations in the world to stop them! Lethal and Jay Briscoe had a series of classic bouts for the ROH World Championship across 2015 and 2016 and it will be interesting to see if their rivalry is reprieved during this dream tag team clash! Who will leave New Orleans World Tag Team Champions? Join us to find out!

Supercard of Honor XII will emanate from the UNO Lakefront Arena in New Orleans, LA on Saturday April 7! Like last year’s history-making event, this event will feature high profile stars and very special matches for all of our fans around the world. Stars from New Japan will take part in this event, and there will be the return of Festival of Honor, featuring all-day autograph signings, Q&A sessions with ROH stars, the Women of Honor Championship Tournament semi-final matches and Finals, and more!

Last year’s Supercard was the most attended event in ROH history, when thousands of fans from around the globe descended on Lakeland, Florida. This April, The Best Wrestling on the Planet has already shattered that record in the Big Easy! Based on the high demand for recent major events, you will want to act fast to ensure you get the best seats and not get locked out of the action! And if you cannot join us live IN New Orleans, join us as this historic event will be broadcast LIVE for HonorClub!

“THE AMERICAN NIGHTMARE” CODY vs. “THE CLEANER” KENNY OMEGA

* THE WOMEN OF HONOR CHAMPIONSHIP TOURNAMENT SEMI-FINALS AND FINAL