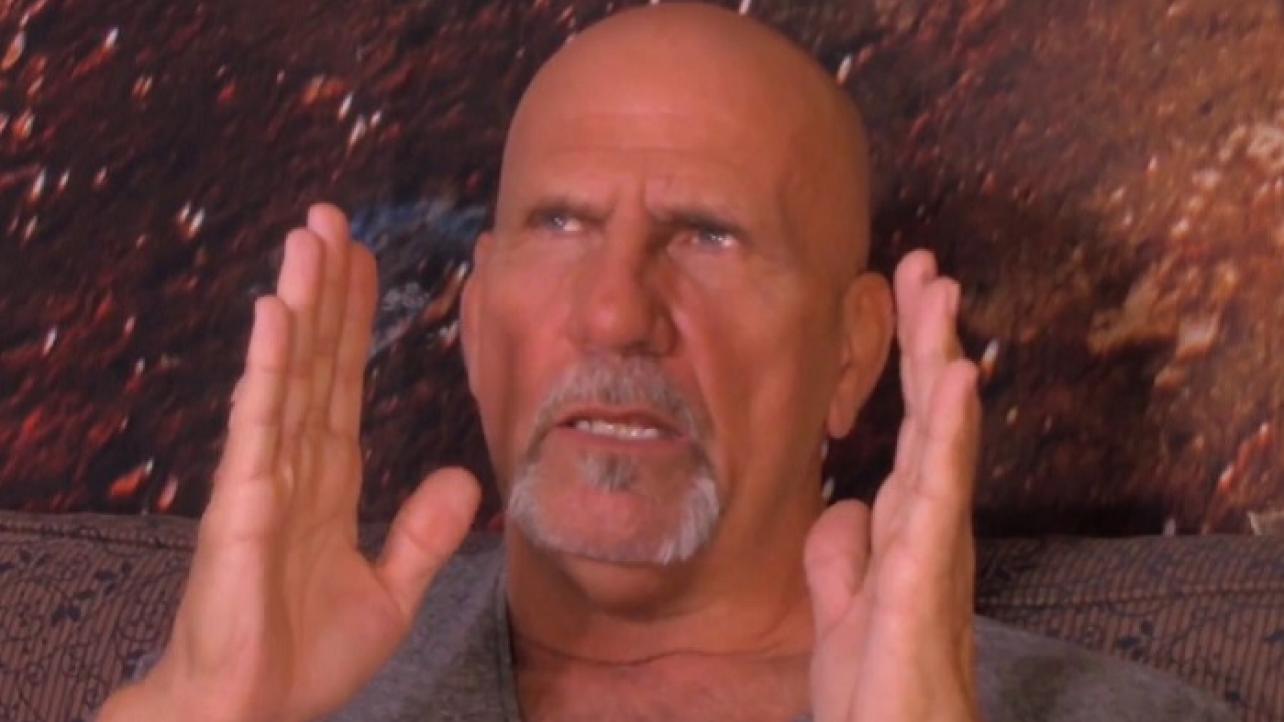 Nikita Koloff recently appeared as a guest on the Counted Out with Mike & Tyler Show for an in-depth interview covering all things pro wrestling.

During his appearance on the program, the pro wrestling legend spoke about working with fellow icon Ivan Koloff, his time working in Puerto Rico, working a marquee event with Ric Flair, comparing his first year in the business to other immediate success stories such as Bill Goldberg and Kurt Angle and more.

On working with pro wrestling legend Ivan Koloff: “Ivan and Don Kernodle, his partner at the time, they were the N.W.A World Tag Team Champions. They were instrumental in my success – by that I mean; so I walk into this opportunity with no experience right, like none, and after the initial introduction on television, which by the way it was an 11 second victory for me, so fortunately I didn’t have to go long or I probably would have been sent home packing, but what we did for the next two or three months Tyler is Don and Ivan and I would get to town early, we get there probably two or three hours early at least, and you might call it on the job training. They bump all over the ring and teach me the mechanics of wrestling and then Ivan would sit in my corner, Uncle Ivan, watch my match I’d sit in their corner, usually a tag team title match, and Id watch their match. Then every night on the drive home then we talk about what’s kind of a lost art and that’s the psychology of wrestling, so mechanics before the match, psychology after the match, it was a crash course – and fortunately for me I adapted very well, became a real student and of course had the success that I have.”

On his time working in Puerto Rico: “Puerto Rico is crazy as as a heel, as a bad guy and after, yeah, two – at least a couple trips, and I think after the last ones, like if I never come back here again as a wrestler I’m okay with that. I mean we we were escorted into arenas and no kidding, can’t make this stuff up, armed guards with AK-47 to get us in the stadium – get us to the arena safely hiding us in work vans, ah kids would sell bags of rocks outside the arena to pellet us with. I was in an arena one time and I’m walking to the ring all sudden now so I felt something in the back of my arm like “what was that?” and I look at blood on my hand. I’ll look down it was a spark plug hit me in the back of the arm, fortunately not the head. So yeah, it was very rough over there as a bad guy.”

On Road Warrior Animal: “I mean back in the day, back in our college days, I mean we were in a sense inseparable. I fell in love with his family, his mom and dad. Especially his mom kinda fell in love with me for whatever reason. You know, he had two other brothers, of course Mark and Johnny, who eventually got into wrestling as well. But early in those early college days, I mean I spent Christmas over. There was one year they all got mad ’cause Lorna, his mom, had more presents under the Christmas tree for me than for her own sons because I think she felt sorry for me because I came from a broken home with no dad but she just embraced me, and I just really fell in love with the family, and spent a lot of time over there and we were essentially inseparable him and I, and through those college days. Fast forward to the wrestling days, and you know we maintain a great friendship throughout the wrestling, in fact his mom and dad eventually moved to Tampa, FL, actually safety harbour. There were specific times I would take 3-4 days off, fly to Tampa, and just chill just Lauren and I. You know his dad was working full time and he come home at night for supper, we’d all have supper together, I’d float around the pool, just get some R&R for taking a mental break but that’s how close I was to the family, as well, I was at his funeral and I’m glad I went. I hadn’t seen James or Joey or Jessica, I hadn’t seen the children in a long time, nor had I seen Mark or Johnny in a long time. It was great to see all of them and just to be there to honor his passing. And so yeah, just a lot of really great memories there.”

On working a marquee event with pro wrestling legend Ric Flair: “It was, I mean in the moment, I mean certainly you feel the pressure, the butterflies are there, and you know ’cause keep in mind I’m only 13 months – I’m still as green under the gills as you can get. It’s only 13 months in the business and first ever Great American bash – main event. Nature Boy Ric Flair – legendary, 25, 30 thousand – however many were there – he flies in the helicopter. For me to say I wasn’t nervous would be a lie. Fortunately, I have the Nature Boy in the ring, who I always say could make a broom stick look good’, cause he made the Russian nightmare look good. And then the ensuing program, as you mentioned, night after night after night – sometimes for 60 minutes or 50 or 45 or so minutes working with him every single night. Man, I learned so much from Ric, and so thankful and grateful for the privilege and the honour to work with him.”

On his first year in the business compared to other immediate success stories such as Bill Goldberg and Kurt Angle: “I don’t make a big deal out of it, but I tell you why I think that is. By the time Goldberg, Angle and all these other guys hit the scene, and I have to do my history here, but Internet started to hit the scene right. I mean the 80s, people will tell you, the fans will tell you, you will probably say really wrestling magazines is pretty much your only form of communication if you didn’t live in its territory, for the most part, right? So once those guys hit the scene and communication, Internet, and things start to expand and grow – now there’s more awareness of that, right? If people went back and look at the track record of my success, starting with match 1, 11 seconds, and at the time from what I understand it was the quickest match on television in wrestling history, I guess, right? Don’t quote me on that folks but when you, when you accelerate the matches I had, I mean I was beating, I was doing handicap matches numerous times a month. Me beating, I mean I’m talking two guys at the same time, same match, right? That night, like in the ring, like sickling one in comes the other sickling him pinning them both, you know? Night after night, after night, short matches, I’m the world tag team champ – quickly I’m the world six man champ – quickly, 13 months, I’m wrestling Flair. And to your point if they had tracked that, they probably find that yes, I was either right up there, or probably set the tone, or maybe even the idea for them to do that with the Goldberg, Angle or whatever.”

On the difference in the current product compared to his era in the business: “Here’s my insight, for whatever it’s worth, here’s why I believe you see the difference in those days. There was – we’ll call it a ‘predetermined outcome’, okay? But the wrestlers in the ring had total creative control in the ring. So, from opening bell, til’ predetermined outcome, we, the wrestlers, for the most part, and many times without even communicating in a dressing room, a lot of times we were on separate ends of the building, went out and told a ‘story’ that drew the fan into the story spontaneously, and what I would call improv. So, there was a real sense of realism there, right? We’re protecting the business at all cost, right? People might have in their mind ‘it might not all be real‘ but they still couldn’t really prove it, right? So, there’s still drawn into the story, I mean when I was wrestling Flair for an hour, or literally a 60 minute draw, a ‘Broadway’, I may be knew the last five minutes, and the rest of that 55 minutes was improve – it was spontaneous, and we were listening to the fan, but the fan, kind of to your point wasn’t dictating to us what to do, we were dictating what we wanted you to do as the fan. So, when you go back and watch old videos, you’re correct, you’ll see the fan reaction response completely different from todays. Today’s fan, and taking nothing away from it, but keep in mind the difference now is there are writers who have creative control, and taking nothing away from the wrestlers, from the athletes, but they essentially don’t have the Liberty to go out and change something, improvise in the ring, and so as you’re watching it – it’s just a story unfolding when they already know the whole story. When as a fan in those days you didn’t know the story, and really weren’t sure what the outcome is going to be, if that make sense.”

On contract signing Magnum TA: “So she watched her son wrestle in high school and college, and thought professional wrestling was no different – he never smartened her up. So you were at the signing, and he goes over the table, and Ivan and I are stomping, you know, the snot out of him, so again, when you see her reaction that’s like a ‘ in-real time’, he’s never smartened her up, he never told her what was going to happen. So mom is freaking out her little boy is getting the snot stomped out of him.”

Check out the complete interview at Spotify.com. H/T to WrestlingHeadlines.com for transcribing the above interview quotes.