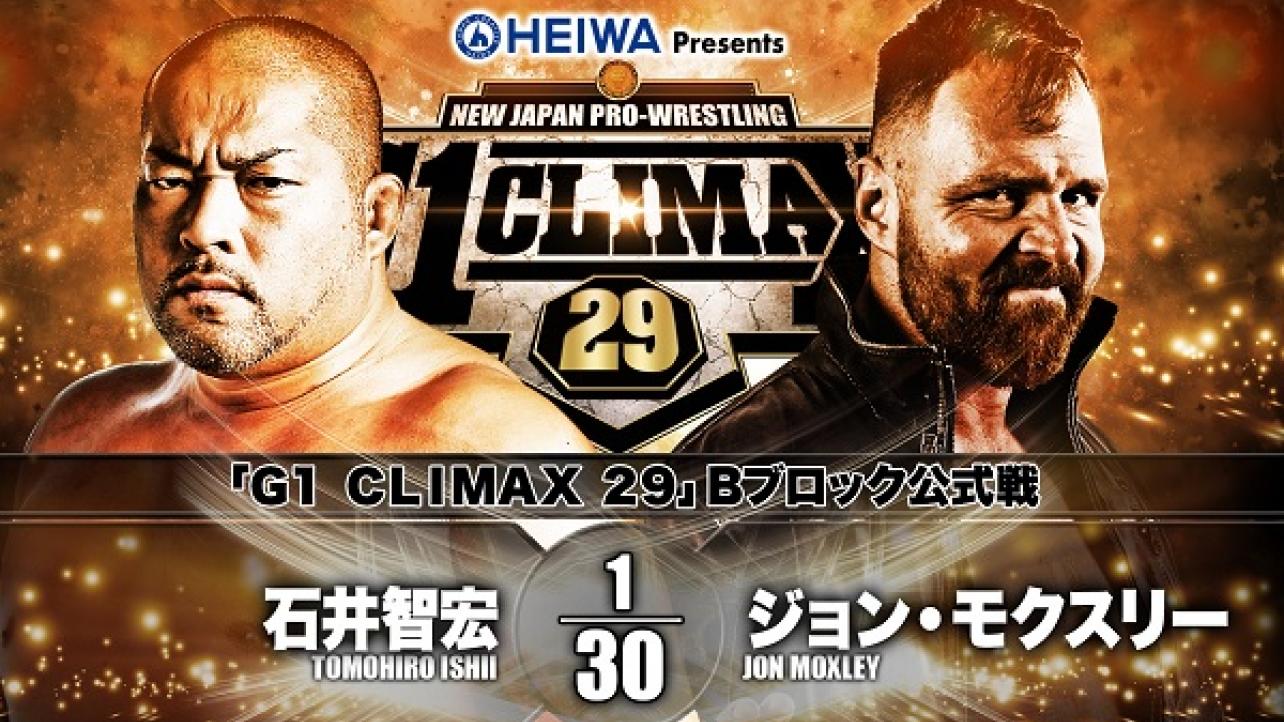 Featured below are results of night six of the NJPW G1 Climax 29 event from Korakuen Hall in Tokyo, Japan. The following report comes from Ethan Renner and F4WOnline.com.

They’re playing up Sabre’s losing streak in the G1, as he remains winless. Sabre tried to attack Fale after the match, but Fale fought him off and left him laying.

This was a wild brawl that saw Bullet Club attack Suzuki-gun before the opening bell.

This was another fun brawl. Suzuki-gun attacked a pack of Young Lions after the match.

Honma went for a kokeshi on Suzuki, but Suzuki tripped him. Suzuki-gun took over. Suzuki used an armbar over the ropes, and this turned into a Suzuki-gun crowd brawl.

Archer and Suzuki worked over Honma in their corner. Suzuki landed some stiff forearm shots. Honma caught a PK, then hit a diving kokeshi, enabling a tag to Tana.

Tana worked on Archer’s legs, playing off the damage KENTA did to Archer’s legs with kicks last night. Archer caught Tana on a slingblade attempt and hit a bossman slam.

Tana and Honma used a double suplex on Archer, then hit stereo kokeshis. Archer hit stereo chokeslams on Tana and Honma as the match broke down. Archer won with the EBD Claw into a pinfall on Honma.

Archer used the Claw on Tanahashi after the bell.

This was a nice preview of the upcoming SANADA vs. Ibushi and EVIL vs. KENTA matches. SANADA and Ibushi posed on the turnbuckles after the match, getting a split reaction from the crowd.

SANADA and Ibushi started out with a hot exchange. BUSHI tripped Ibushi from the floor, allowing LIJ to take over. They cut the ring in half, working over Ibushi. Ibushi came back with a dropkick and managed a tag to KENTA.

KENTA lit up EVIL with kicks and knee strikes. BUSHI made a tag and hit a missile dropkick. KENTA came back with a powerslam, then tagged Connors.

Connors hit a great leapfrog/drop down/dropkick, then used a full crab on BUSHI. SANADA tried to break it up, but Ibushi intervened. LIJ went three-on-one against Connors, and BUSHI hit a backstabber for a near fall. BUSHI then hit the MX for the pin.

Ospreay and Okada delivered a nice preview of their meeting tomorrow, but the real star of this match was Henare. He looked great in defeat here.

YH and Henare had an even back-and-forth at the outset. Okada got a tag, hit a slingshot senton, then mocked Ospreay with his pose. Okada and YH worked over Henare in their corner.

Ospreay finally got a tag. He hit Pip Pip Cheerio on Okada, then hit the Rainmaker pose. Ospreay ducked a Rainmaker. Okada blocked an OsCutter with a dropkick. Ospreay hit an enzuigiri, and we were back to Henare and YH.

Henare got a pair of near falls off a vertical suplex and a tackle. Okada and Ospreay jumped in. Ospreay sent Okada to the floor with a clothesline, then hit a pescado. YH picked up the pin after a fisherman buster.

This was excellent. Shingo was great as always, but Taichi really rose to the occasion.

Shingo attacked before the bell, as things got off to a fast start. Shingo hit a big vertical suplex, and Taichi rolled to the floor in an attempt to slow things down. Taichi used a distraction from Miho Abe to hit Shingo with his mic stand.

They fought into the crowd, and Taichi used a chair. Back inside, Taichi used an eye rake, then hit a series of kicks. Shingo fired back with strikes, a slam, and a back elbow off the second rope.

Shingo missed on a sliding lariat, then Taichi hit a head kick. Taichi nearly took Shingo’s head off with an enzuigiri, then took his pants off.

Taichi hit a buzzsaw kick. Shingo used a backslide for a two count, then hit Made in Japan for a near fall. Shingo fired up, then hit two lariats. Taichi blocked a Last of the Dragon attempt, then hit an axe bomber and an enzuigiri.

Taichi used a Last Ride for a near fall. Taichi shoved the ref down and tried a low blow, but Shingo blocked it. Shingo hit a short lariat, then hit a Pumping Bomber for a two count.

Juice took the early part of the match. He hit a series of jabs and clotheslines. He teased the cannonball, but switched to a dropkick as Cobb stood up out of the corner. Juice tried a pescado. Cobb caught him and teased a suplex on the floor, but Juice slipped out, then posted him.

Juice fought off a Tour of the Islands attempt. He connected with a leg lariat, then went for a Juice Box. Cobb slipped out, and they exchanged forearms. Cobb hit a series of overhand rights, but Juice answered with a spinebuster.

Juice hit a cannonball, then a top rope frankensteiner for a near fall. Cobb caught Juice on a running attack, then placed him on the top rope. Juice hit a sunset flip powerbomb from that position, earning a two count.

Cobb hit a superkick, then connected with a bridging German for a near fall. Juice blocked Tour of the Islands and used a roll-up for a two count.

Cobb blocked a left hand, then hit Tour of the Islands for his first win of the tournament.

White rolled to the floor, then used a distraction from Gedo to take over. Yano untied a corner pad. They traded roll-ups, then White hit a low blow. Yano spit in White’s eyes.

White blocked a low blow. Gedo jumped in, and Red Shoes took a bump. Yano took brass knuckles away from Gedo. White ducked a brass knucks shot, but got sent into Gedo. Yano then hit a low blow with the brass knuckles and used a schoolboy for the pin.

I was having a difficult time trying to visualize this match. Physically, Naito isn’t in a position to be carrying anyone right now. Goto has always been a guy that is capable of great matches, but he needs someone just a level up to work with.

I think both guys took an extra step here. Naito had to kick it up a notch from his recent efforts, and Goto had to be more of a ring general than usual. The last few minutes were good, but I’m not sure that the finished product was as good as the sum of its parts. The effort was there, though.

Goto choked Naito with his T-shirt before the match, as they continue to present a more intense version of Goto. Goto hit a series of kicks, but Naito quickly made a comeback. He dragged Goto to the apron, then snapped his leg against the apron.

Naito continued to work on Goto’s left leg. He hit a low dropkick, then used a figure four. Goto came back with a spinning clothesline, a wheel kick to the back, then a Saito suplex for a near fall.

Goto hit a neckbreaker in the corner. Naito continued working over the leg. Naito went for Destino, but Goto turned it into a neckbreaker over the knee. Goto hit an ushigoroshi for a near fall.

Goto hit a series of short kicks to the chest with his bad leg. I’m not sure if he was supposedly playing possum, or if he just stopped selling.

Naito went for Destino again, but Goto caught him, then hit an inverted GTR. Goto hit a mid kick for a near fall. He went for another ushigoroshi, but Naito turned it into a DDT. Naito hit Destino, but Goto kicked out.

Naito followed up with a second Destino, earning his first points of the tournament.

I don’t know if this was the best match of the tournament so far, but this is currently my favorite.

They went nose-to-nose before the bell and started off at warp speed. They traded a flurry of strikes. Ishii missed an enzuigiri. Moxley took control and took the fight into the stands. Moxley rammed Ishii into the EAST sign.

Moxley controlled the brawl as they continued around the entire arena. Back inside, Moxley taunted Ishii with short kicks and stomps. Ishii no-sold them, then fired up. Moxley cut him off with more short strikes, then used an STF.

Moxley hit a series of chops and punches in the corner. Ishii ran out of the corner and hit a tackle, dropping Moxley. Ishii answered with his own series of punches and chops, then hit a vertical suplex.

They brawled to the floor, where Moxley whipped Ishii into the barricade. Each man grabbed a chair. They hit stereo chair strikes, but Moxley got the best of the exchange. Moxley threw a chair at Ishii, dropping him.

Ishii placed Moxley on the table, then hit a splash off the top rope through the table. We reached another level here.

Ishii blocked a knee strike, then hit an enzuigiri. He used a sliding lariat for a near fall. Ishii tried for a brainbuster, but Moxley bit his face, stopping him. Moxley hit a Regal Knee strike, into a double down.

They traded headbutts. Moxley hit a lariat, then used a uranage for a two count. Moxley hit the Regal Knee, but Ishii kicked out.

Ishii hit a backdrop out of a Death Rider attempt. Ishii blocked another Death Rider with a lariat. Ishii hit a second lariat. He covered, but Moxley kicked out.

Each teased their finisher. Ishii hit a headbutt, then two lariats. Moxley no-sold, hit palm strikes, then hit Death Rider — but only got a two count.

Moxley pulled down his knee pads, hit a Regal Knee, then followed with a Death Rider. This time, it was enough for the pin.