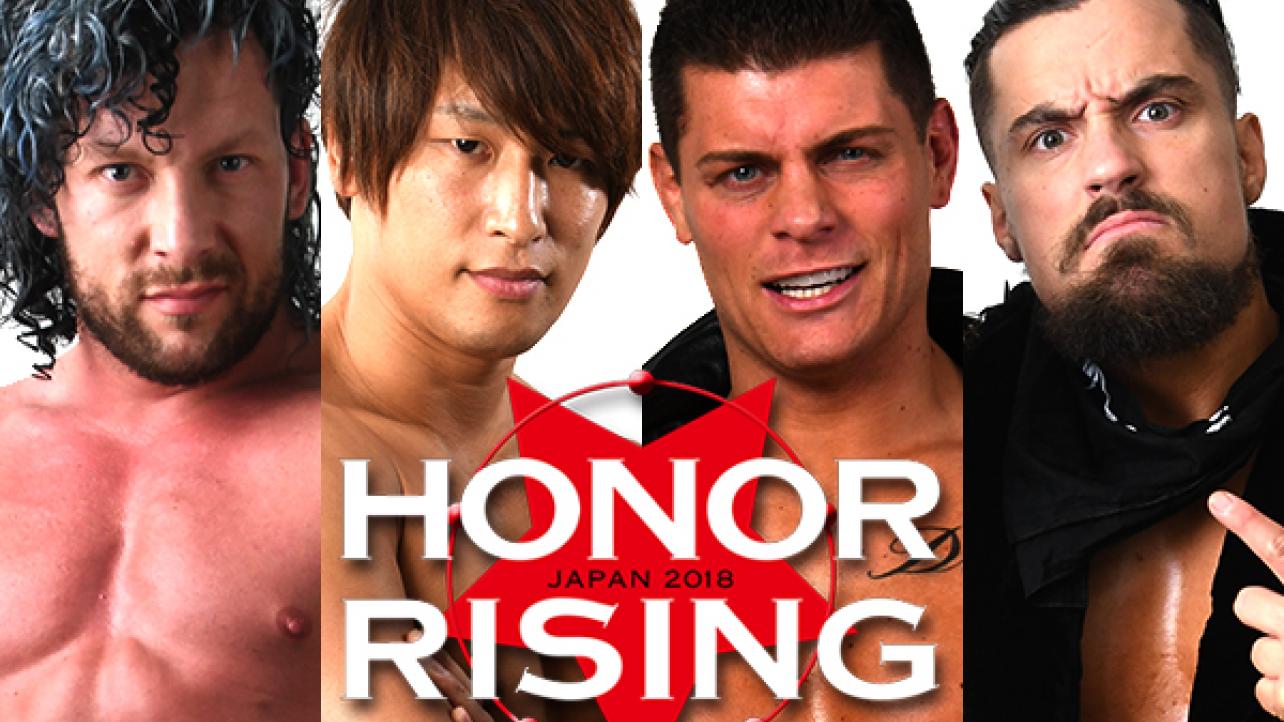 This weekend, New Japan Pro Wrestling (NJPW) held their Honor Rising events. Featured below, courtesy of F4WOnline.com, are complete results from the show.

Short match, mostly an exhibition for the Beer City Bruiser, who didn’t look bad here. In fact, he worked hard the entire tour. He won with a frog splash.

I liked the last few minutes of this, very good action. Hikuleo is way better than he was a few months ago. Still green, but getting there. Yujiro and Owens were clearing house until Owens accidently superkicked Yujiro. He walked into the Lethal Injection as the babyfaces returned to the ring. Hikuleo entered but ate a stunner, pulp friction and a top rope elbow from Lethal for the win.

This was fun, with some cools spots here and there. BUSHI beat up Taguchi on the west side of Korakuen Hall while Takahashi beat up Flip on the east. Gordon and Takahashi worked a lot of the match together and had good chemistry with one another. BUSHI got involved towards the end of the match and eventually pinned Gordon after he took an MX as he was on Takahashi’s shoulders in a cool finish.

This was what it was, guess you can say it was fine. Cheeseburger worked a lot of the match and got a bunch of near falls. He’s super over with this crowd. His size discrepancy is also amazing compared to everyone else in the ring (he is TINY), but clearly that is part of his charm. GoD eventually isolate Cheeseburger and pin him after the Guerilla Warfare.

This was your usual very good Young Bucks style match. A lot of cool moves, including a Rite of Passage/Meltzer driver combo that almost happened, but unfortunately was thwarted. Page picked up the win for his team, pinning Jay White with his finish, almost certainly giving him a future United States title shot.

There was an angle after the match where Page was going for a chair and looked to use it on White. The Bucks intervened, talking him out of it. He agreed as the Bucks go to the back. However, once the Bucks were out of sight, he took the chair back from the outside and used it on White, drilling him with his finish on the chair.

The next match was set to begin when Beer City Bruiser came out and said that since he was screwed out of the NEVER title match last night, he was putting himself in this one. He attacked both Castle and Baretta until Castle fended him off and said he would take him on too. So the match was switched to a triple threat, likely due to Baretta tearing his bicep and pectoral muscle last week.

This was a good bout given the situation. Baretta was in the match, but was in and out as Castle and Bruiser worked the bulk of it. At one point, Baretta tried to take out Bruiser with a piledriver on the apron, but Bruiser countered and laid him out on the apron with a death valley driver. There was a great near fall spot where Castle tumbled to the floor and Bruiser hit a frog splash, but Baretta kicked out at 2.99. Should’ve heard the reaction to that one. Castle came back into the match and hit a deadlift German suplex on Bruiser to retain the title

This was a good main event. I think most of all they did a great job in getting over the Golden Lovers as a top tag team, even though that doesn’t require much effort. In one of the first big spots of the match, Ibushi tagged in Omega, which caused Cody to immediately exit the ring, not wanting to get near Omega. He sat in the second row, but Omega went to the top rope and launched himself all the way over to the second row, wiping out Cody. Omega and Ibushi tried to go for the Cross Slash, a stereo Golden triangle moonsault to the floor, but didn’t get it.

Cody got the heat on Ibushi until Omega finally got the hot tag and cleared house. Some great back and forth until Scurll uses a umbrella and strikes Omega to escape the One Winged Angel. Scurll traps Omega in the chicken wing and Cody sinks in a trailer hitch but both Golden Lovers manage to escape.

They look to finish Ibushi off with a dropkick/doomsday device combo, but Ibushi landed on his feet as he and Omega rallied back. They hit the cross slash, but Cody fired back and planted Omega with the crossroads. Scurll followed with the last shot on Ibushi. Cody then instructed Scurll to hold Ibushi. He managed to escape, but Cody grabs him and kisses him. This angers Ibushi, who plants him with the press powerbomb. He and Omega focus on Scurll, drilling him then pinning him after hitting the Golden Trigger, a kamigoye/V-trigger combination.

Omega after the match said this was one of the greatest weekends in his life, and declared that they are the best tag team in the world. That brought out the Young Bucks, who weren’t too happy about that last statement. Matt said that when they went to the hotel room (at the end of the Being the Elite episode), the Golden Lovers made a peace offering, and they accepted. They didn’t have a problem with them until Omega said they were the greatest tag team in the world.

Matt announced that The Young Bucks have officially moved up to the heavyweight division, and that they would see them around. Omega then finished off the show translating the Bucks’ promo and wondered if what just happened was a challenge.