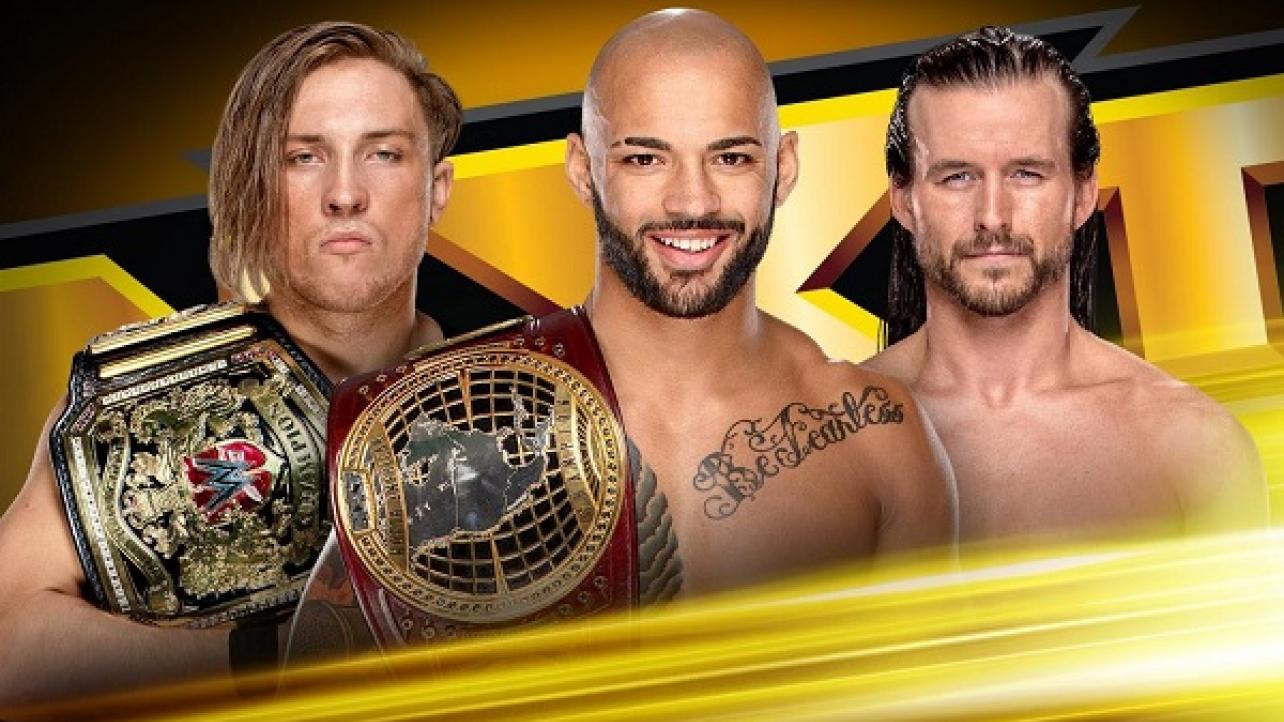 WWE returns to the WWE Network this evening with their latest weekly episode of NXT TV from the promotion’s headquarters at Full Sail University in Winter Park, Florida.

For the first time ever, the NXT North American Title will be defended in a Triple Threat Match, as Ricochet, Adam Cole and Pete Dunne slug it out for the championship. Also, Keith Lee rumbles with Kona Reeves, plus much more.

The rivalry between NXT North American Champion Ricochet, WWE U.K. Champion Pete Dunne and Undisputed ERA’s Adam Cole has seen plenty of twists and turns and produced countless breathtaking matches in recent months. Yet, the biggest battle in this three-way war is still to come on when all three Superstars will collide in a Triple Threat Match with Ricochet’s North American crown at stake this week on WWE NXT.

NXT General Manager William Regal ordered the gigantic match after Undisputed ERA disrupted Dunne and Ricochet’s instant-classic Champion vs. Champion Match on Sept. 19, cheating both Superstars of the chance to become a dual titleholder. Conceding that Cole, the inaugural North American Champion, was owed his contractually required title rematch, Regal added the wrinkle of The BruiserWeight in the interest of fairness, concluding that The Panama City Playboy had only held off on invoking his rematch so that Dunne could soften up The One and Only first.

Whether Regal’s theory is accurate matters not. His say is final, and in this case, it’s a cause of celebration for the NXT Universe. Don’t miss a second of the action when Ricochet defends the NXT North American Title against Dunne and Cole on WWE NXT, streaming this Wednesday, exclusively on the award-winning WWE Network.

Keith Lee and Kona Reeves are set to do battle

After sharing a testy exchange a few weeks back, Keith Lee and Kona Reeves will get the chance to settle their remaining quarrels in the squared circle this week.

When Lee attempted to introduce himself as the two crossed paths backstage, Reeves instead called out “The Limitless” Superstar for interrupting his hair appointment. The Finest then told NXT’s newest breakout Superstar to wait his turn, which sparked Lee to make mention of Reeves’ “finest set of losses.” From that moment, a storm began to brew.

As Lee continues to wow the NXT Universe with his “Limitless” performances, he faces Reeves, who, despite being all-talk outside of the ring, is all-business when it comes down to action. Will The Finest and his devastating Hawaiian Drop finish the job? Or will Reeves just become the latest Superstar to bask in Keith Lee’s glory?

Will Velveteen Dream have an answer for Tommaso Ciampa?

Last week, NXT Champion Tommaso Ciampa delivered a message to Velveteen Dream that was almost impossible to ignore. In addition to asserting that the Dream stay out of his spotlight, he hit the nail on its head by declaring: “I will be the one to turn the dream into a nightmare.” For someone with an outsized ego like Dream, The Blackheart’s blustery comments may very well ruffle his feathers. Heading into this week’s NXT, one can only imagine how the Dream will respond. After all, he’s been focused on painting the black-and-yellow brand purple following big victories over EC3 and, more recently, Johnny Gargano.

What does Nikki Cross know?

No one knows what goes on in the mind of Nikki Cross, but she has been slowly providing a glimpse – specifically in the case of who attacked Aleister Black. In the last two weeks, Cross has been hinting at knowing the possible suspect(s). First, she barged in on Sarah Schreiber’s interview with Undisputed ERA to exclaim that she knows the culprit(s). Last week, while reiterating her desire to “play” with Bianca Belair (whom Cross is scheduled to face on Oct. 17), she eerily suggested “I know, I know, I know, I know…”

The question on everyone’s mind now is what, exactly, does Cross know? Will we find out this Wednesday when NXT streams on WWE Network at 8/7 C?