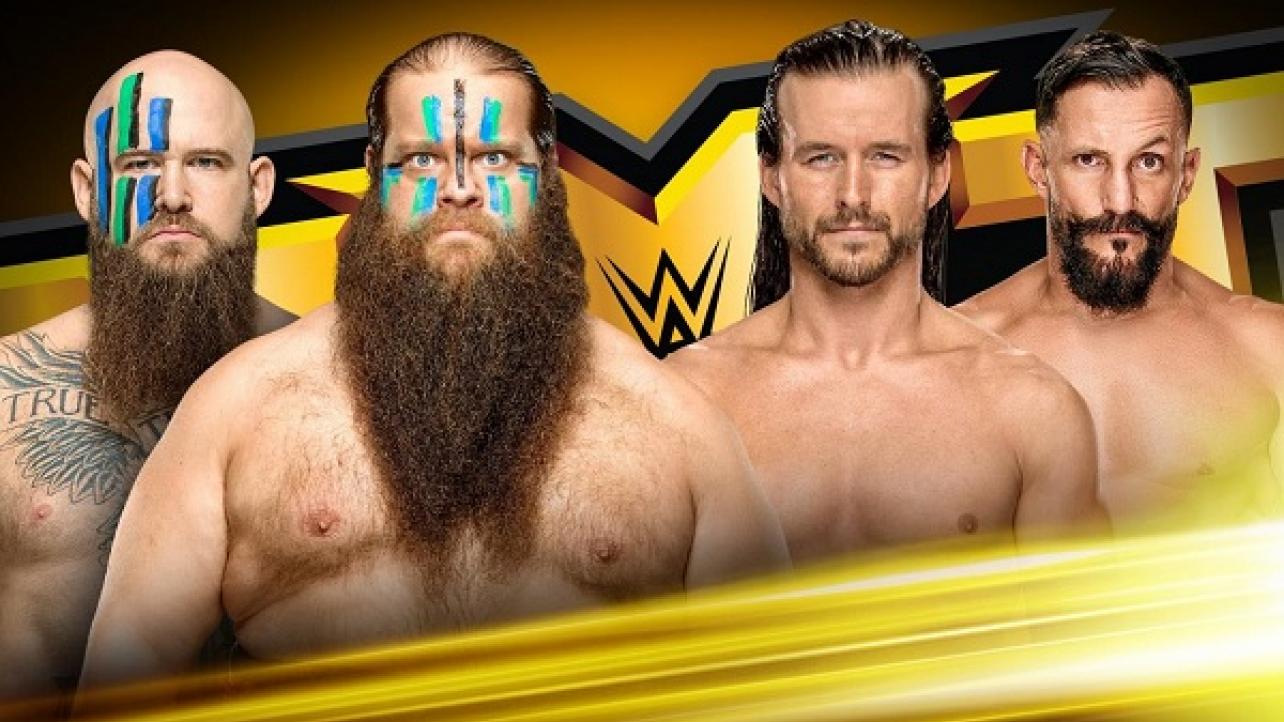 It’s Halloween and with the holiday comes this week’s episode of NXT TV. The NXT TV show returns on the WWE Network this evening with a new episode from the brand’s promotional headquarters at Full Sail University in Winter Park, Florida

This Halloween could turn into a scary experience for Undisputed ERA’s Adam Cole & Bobby Fish as they get set to battle The War Raiders, the team whose NXT Tag Team Title opportunity Fish ruined two weeks ago, tonight on WWE Network.

What will be the fallout from last week’s chaos?

The NXT Universe is still reeling from last week’s wild chain of events that began with General Manager William Regal planning to announce NXT Champion Tommaso Ciampa’s opponent at TakeOver: WarGames and ended with Johnny Gargano superkicking Aleister Black and seemingly revealing himself as the culprit behind The Dutch Destroyer’s ambush months ago.

How will Black respond to Gargano’s unsettling actions? And, with his TakeOver: WarGames announcement thrown into disarray, will Regal finally reveal who will challenge The Blackheart on Nov. 17 — an opportunity that both Velveteen Dream and Lars Sullivan believe they deserve? Find out tonight when NXT streams on the award-winning WWE Network at 8/7 C.

Due to Bobby Fish’s blatant interference in the NXT Tag Team Title Match between Roderick Strong & Kyle O’Reilly and The War Raiders two weeks ago, William Regal has ruled that the newly returned Fish and Adam Cole must face the bruising pair of Hanson & Rowe tonight on NXT.

The War Raiders will be hell-bent on retribution considering Fish not only ruined their match against the NXT Tag Team Champions (a battle that Hanson & Rowe were on the brink of winning), but also used a steel chair to ravage the modern-day Vikings.

Fish pulled a similar stunt last week during The Undisputed ERA’s heinous four-on-one beatdown of EC3, devastating The Top One Percent’s leg with a chair. Though the nefarious faction is surely flying high after their decimation of The Top One Percent, can The War Raiders bring Cole & Fish crashing back down to earth?

All hail The King of Bros.

Matt Riddle, the highly acclaimed UFC fighter-turned-NXT Superstar, made headlines around the world when he was announced as the black-and-yellow brand’s newest blockbuster signee at TakeOver: Brooklyn IV in August.

After months of anticipation, the NXT Universe will get to see The King of Bros in action for the first time on WWE Network this week. Considered one of the most dangerous strikers and submission specialists in all sports-entertainment, Riddle is pegged by many as a champion-in-the-making. Don’t miss out when The King of Bros steps foot in the NXT ring for the first time on the award-winning WWE Network.

The Street Profits and The Mighty reignite their rivalry

The steadily intensifying animosity between The Street Profits and The Mighty will result in fireworks this week when the rival squads square off on NXT.

Shane Thorne & Nick Miller have stolen victories from Montez Ford & Angelo Dawkins over the past few months, but perhaps the Aussie action heroes’ greatest offense was their absconding with Ford & Dawkins’ chains and party cup. The Mighty continue to taunt The Street Profits about the stolen goods on Twitter, adding fuel to the fire.

My main home dog Rowdy getting down and watching @WWENXT TV!
Wags his tail like nobody can
Am I right @MontezFordWWE @AngeloDawkins pic.twitter.com/V98j8pNpcL

The Mighty also won their last showdown against The Street Profits in September, thanks to a targeted attack on Ford’s leg, which was hurt during the fracas. Can Ford & Dawkins, who are riding a wave of momentum following their EVOLVE Tag Team Title win Sunday night, rebound against Thorne & Miller?

NXT’s Twisted Sister will be in action

Now that the mystery of Aleister Black’s attacker has been solved, the Superstar who stirred the pot during the investigation, Nikki Cross, readies for in-ring competition this week on WWE Network.

NXT’s Twisted Sister, who for weeks teased that she knew the identity of The Dutch Destroyer’s assailant, was last seen in action last month against Bianca Belair. That barnburner ended without a victor as Black made his ominous return to collect intel from Cross.

Cross now prepares to return to the ring this Wednesday, and her timing couldn’t be better considering the complexion of the NXT Women’s division has changed drastically since Shayna Baszler regained the NXT Women’s Title from Kairi Sane at WWE Evolution. Will The Scottish Superstar be able to refocus on in-ring action now that the drama of Black’s ambush is in the past?