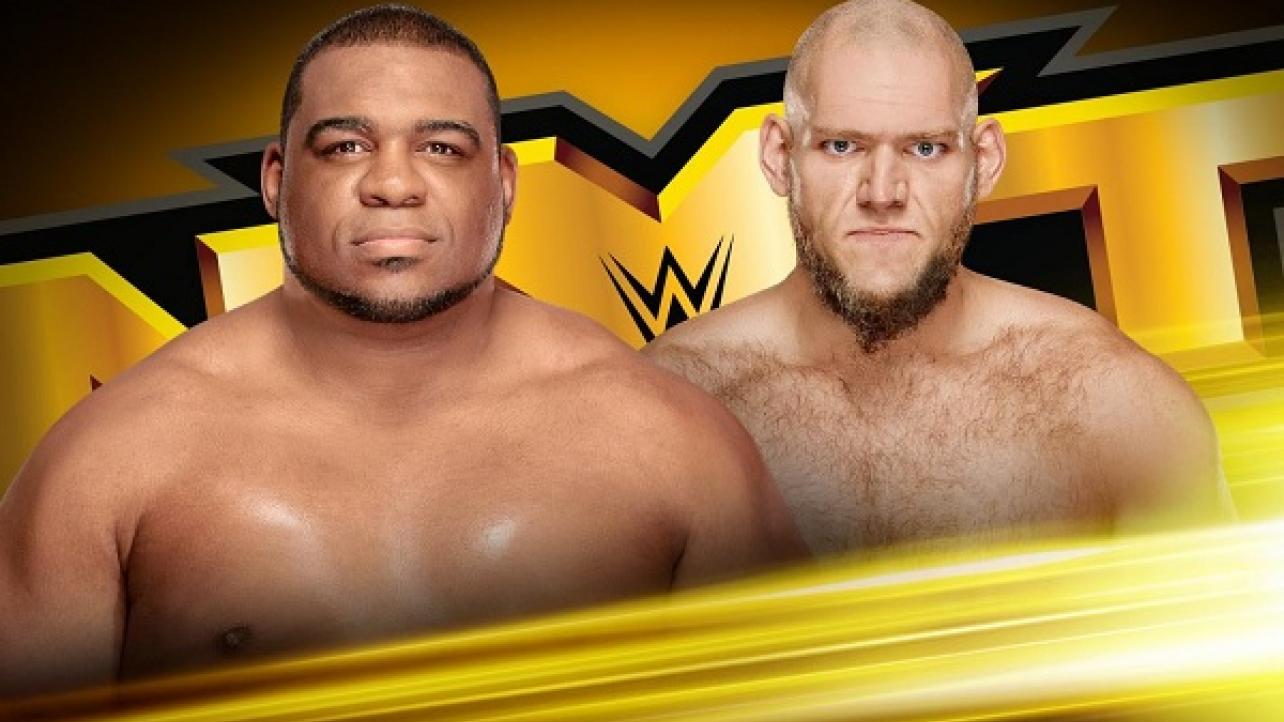 WWE returns to the WWE Network this evening for this week’s episode of NXT TV from the SJSU Event Center in San Jose, California.

Secure the ring and bar the door, because two of NXT’s biggest and strongest Superstars, “Limitless” Keith Lee and “The Freak” Lars Sullivan, are set for battle on this week’s edition of WWE NXT, emanating from San Jose, Calif.

Lars Sullivan will find out what it’s like to fight someone his own size when he collides with Keith Lee on NXT.

The two pugilistic pachyderms came to blows last week when Lee stopped Sullivan from carrying out a post-match beatdown on a defeated opponent. The 320-pound Lee pounced the 330-pound Sullivan out of the ring (aka “Lars Sullivan Territory”) in one of the few documented instances of The Freak being physically overwhelmed. Following the confrontation, both Superstars had to be separated in the locker room.

Lee has been unstoppable and undefeated since coming to NXT, while Sullivan has been on a path of destruction as he searches for another NXT Title opportunity. Which super-heavyweight will be left standing this week on WWE Network?

Tag team purists are in for a treat this week as the smash-mouth Brit-Am alliance of Danny Burch & Oney Lorcan takes on “Aussie action heroes” The Mighty.

Shane Thorne & Nick Miller’s experience as a unit is unparalleled, and their down-and-dirty tactics have produced several high-profile, if controversial, victories. Yet, you’d be hard-pressed to find a team that hits as hard or loves fighting as much as Burch & Lorcan.

Are The Mighty a king’s hit away from the winner’s circle, or will Burch & Lorcan be throwing up the ones and twos when the final bell sounds?

EC3 returns to the ring against Marcel Barthel

EC3’s career was put in jeopardy last month after a savage gang attack by Undisputed ERA that saw Bobby Fish wreck EC3’s leg with a steel chair. Although such an ambush would be enough to put most ordinary men out of action for months, if not convince them to find an entirely new line of work, The Top One Percent is anything but ordinary.

Now healed and itching for a fight, NXT’s Golden Goose is set to return to action this week against second-generation grappler Marcel Barthel of Germany. EC3 has pledged to come back as a changed man, one that will conquer whoever gets in his way, and demolish anyone and everyone who has ever wronged him. Will Barthel, a technically gifted blue-chipper who is considered among the WWE Performance Center’s best-kept secrets, regret being first up on EC3’s redemption tour?

Head Baddie in Charge takes on The Vision

In a first-time matchup on NXT TV, Mia Yim takes on Vanessa Borne. Since joining the black-and-gold brand, Yim has surged into the NXT Women’s division like a bolt of lightning. Yet, even the highly decorated and absurdly skilled Head Baddie in Charge might be in for a shock against The Vision, whose ruthless aggression grows by leaps and bounds each time she competes on WWE Network. Can Borne upend Yim and score arguably the biggest win of her career?