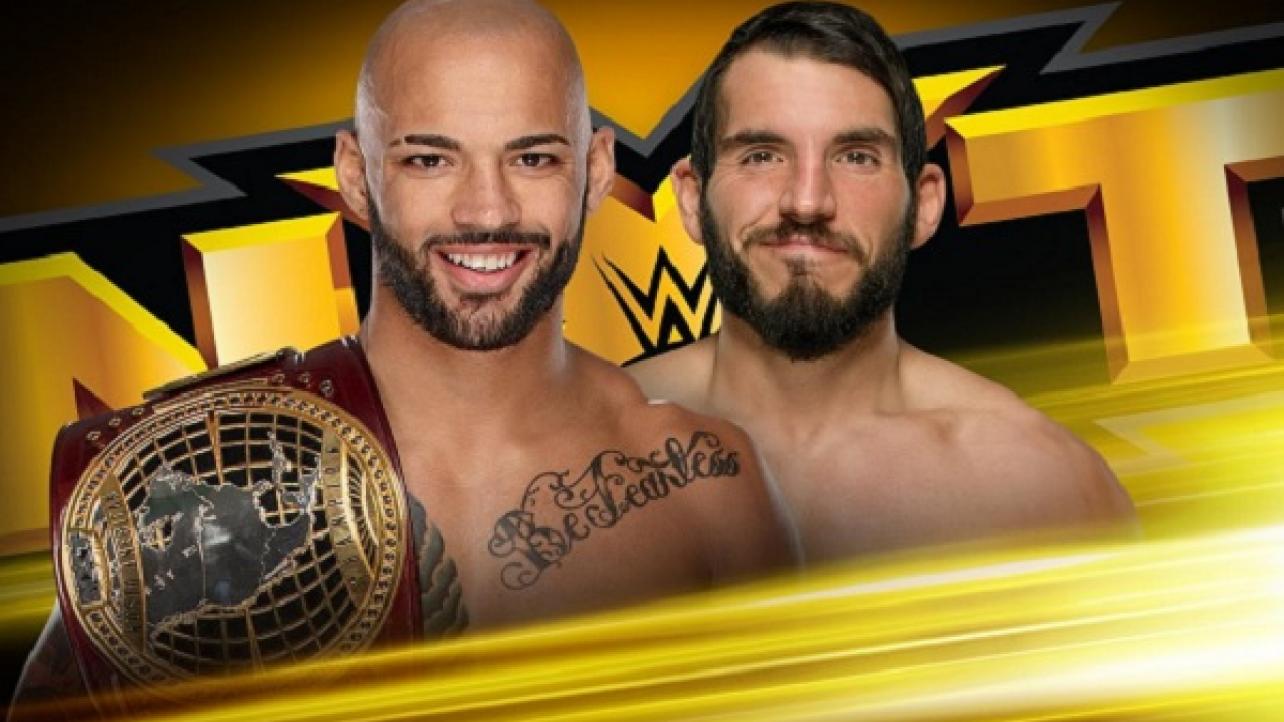 This week’s episode of NXT TV from Full Sail University in Winter Park, Florida is a big one, as it is the “go-home” show for this Saturday’s NXT TakeOver: Phoenix 2019 live special on the WWE Network as part of WWE Royal Rumble 2019 pay-per-view weekend in Arizona.

Just days before his title match against NXT North American Champion Ricochet at TakeOver: Phoenix, Johnny Gargano has challenged his rival to show up at Full Sail Live this Wednesday. What fireworks are in store for Johnny TakeOver and The One and Only? Plus, Velveteen Dream returns to NXT TV, Danny Burch & Oney Lorcan battle Marcel Barthel & Fabian Aichner and much more.

Gargano vows to give Ricochet all the respect he can handle

After a decisive victory last week against Humberto Carrillo, Johnny Gargano called out NXT North American Champion Ricochet, daring The One and Only to show up at Full Sail Live this Wednesday, three days before their title match at TakeOver: Phoenix.

Ricochet is not one to back down from a challenge, and 2019’s Johnny Wrestling — with his laser-focus on “wins and championships” — isn’t above taking extreme measures to make his New Year’s resolution a reality. That’s a recipe for bedlam. Watch the mayhem unfold when WWE NXT streams at 8/7 C this Wednesday on the award-winning WWE Network.

Will Ciampa continue to balk at Black’s invitation?

Aleister Black doesn’t want to wait until Saturday at TakeOver: Phoenix to absolve NXT Champion Tommaso Ciampa of his sins. The self-proclaimed Greatest Sports-Entertainer of All Time, on the other hand, insists he has no interest in coming face-to-face with The Dutch Destroyer unless it’s on a grand stage befitting a main event player like himself, such as TakeOver.

Yet, should Black — or the NXT Universe, for that matter — take The Blackheart’s words at face value considering his ignoble track record? And even if Ciampa’s deferral isn’t just more psychological warfare by NXT’s chief puppet-master, there’s reason to think that Black’s pure determination and rage might be enough to bring the two forces into conflict before their title bout in Phoenix, whether the champion likes it or not.

What does the Velveteen Dream Experience have in mind for 2019?

The NXT Universe has been Velveteen Dream-deprived since TakeOver: WarGames, when the 23-year-old prodigy came oh so close to beating NXT Champion Tommaso Ciampa for the black-and-gold brand’s top prize. That all changes this Wednesday when the Velveteen Dream Experience returns to Full Sail Live. As recent vignettes have shown, the talented and captivating Superstar looks to make 2019 his biggest year yet. That journey begins this week, exclusively on WWE Network.

Burch & Lorcan to throw down with Barthel & Aichner

An international incident is to be expected this week when Brit-Am bruisers Danny Burch & Oney Lorcan battle the “European Union” of Marcel Barthel & Fabian Aichner. Burch & Lorcan threw down the gauntlet two weeks ago after taking exception to Barthel & Aichner’s claim that they were the finest NXT tag team on either side of the Atlantic, and the European Union wasted no time picking it up.

That sets the stage for a match that should entice all tag team enthusiasts. Between Burch & Lorcan’s smashmouth styling and Barthel & Aichner’s combination of finesse and strength, this duel has all the makings of a tag team instant-classic.

Best friends Kairi Sane and Io Shirai share an unbreakable bond outside the ring, and this week on NXT, they’ll get a chance to join forces as tag team partners. Although this will be the first time that The Princess Pirate, the winner of the 2017 Mae Young Classic, and The Genius of the Sky, a finalist in last year’s Classic, have teamed together on NXT TV, smart money says it will be a pairing that’s not to be missed.