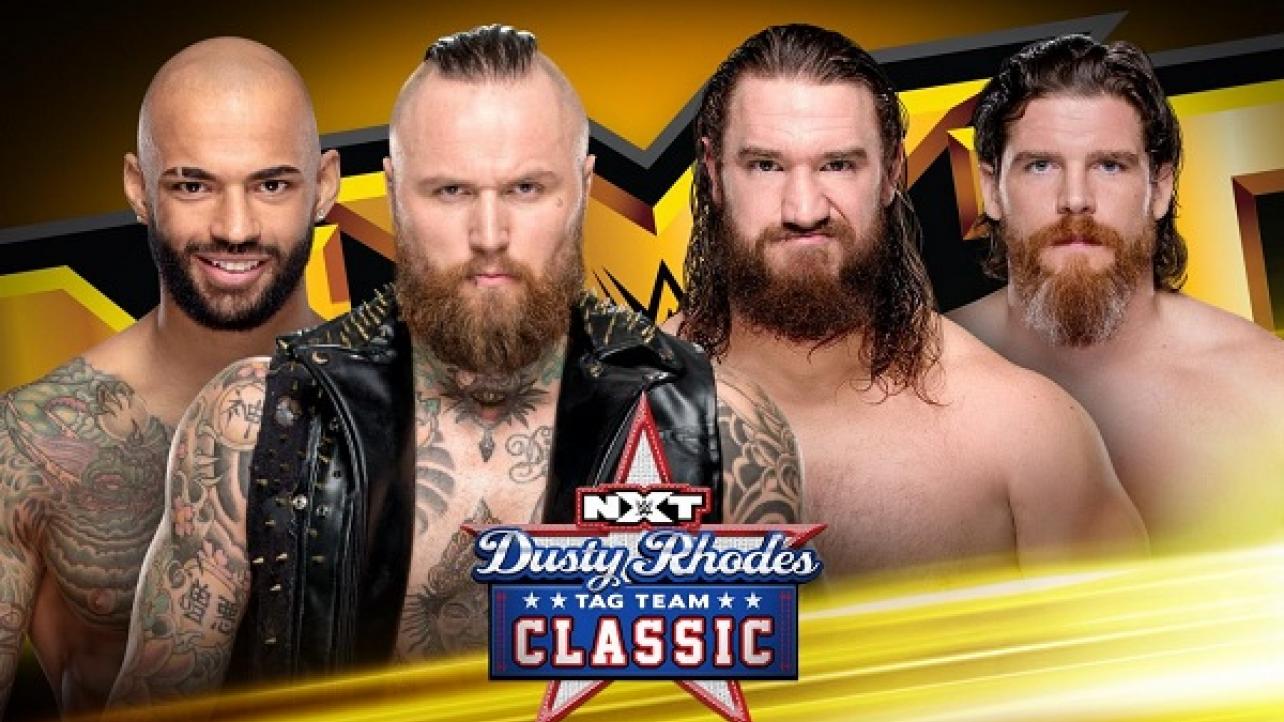 The road to WrestleMania 35 continues on Wednesday, as the latest episode of NXT TV will air on the WWE Network this evening.

Tonight’s show will be the second-to-last edition of NXT TV leading into their big NXT TakeOver: New York special during WrestleMania 35 Weekend.

The road to NXT tag team supremacy will reach an emotional climax when Aleister Black & Ricochet battle it out with The Forgotten Sons in the Dusty Rhodes Tag Team Classic Final. Plus, Adam Cole and Johnny Gargano will meet face-to-face for the first time since last week’s blockbuster NXT Title Match announcement for NXT TakeOver: New York.

As The War Raiders await the newest challengers to their throne at NXT TakeOver: New York, a separate crown will be bestowed this week when the teams of Aleister Black & Ricochet and The Forgotten Sons square off in the Dusty Rhodes Tag Team Classic Final. In the weeks since the tournament’s launch, eight teams have battled it out in the name of the lionized WWE Hall of Famer, electrifying Full Sail Live with a series of stellar clashes. Now, only two teams remain, as the stakes sit high and tension is fully boiled.

The Forgotten Sons raised the temperature last week when they ambushed Black & Ricochet from behind after the duo’s grueling Fatal 5-Way battle against Velveteen Dream, Adam Cole and Matt Riddle. Plenty of questions were raised after the attack, none more pressing than what condition Black & Ricochet will be in for the finals. Will Steve Cutler & Wesley Blake complement their vicious streak with a Dusty Classic victory, or will they Fade to Black as Black & Ricochet become The One and Only challengers for The War Raiders’ NXT Tag Team Titles at TakeOver: New York?

What will happen when Adam Cole and Johnny Gargano meet face-to-face?

Adam Cole will stand face-to-face with Johnny Gargano, less than two weeks before their 2-out-of-3 Falls Match for the NXT Title at TakeOver: New York.

What will Gargano have to say to his opponent, who incredibly outlasted the likes of Velveteen Dream, Aleister Black, Ricochet and Matt Riddle in a hectic slugfest to earn a ticket to the NXT Championship Match at TakeOver? Better yet, will the squared circle be enough to contain their uncontrollable championship desire?

The high-flying combination of Kacy Catanzaro & Lacey Lane will take on the bad and bougie alliance of Aliyah & Vanessa Borne in tag team action. Expect sparks to fly when these tandems collide. Can Aliyah & Borne add another win to their united front, or will Catanzaro & Lane throw a blow to their momentum?

The Original Bro squares off with NXT’s “Finest”

Before stepping into the spotlight with NXT North American Champion Velveteen Dream at TakeOver: New York, Matt Riddle will take on Kona Reeves this week. While his championship match against Dream still may be on the brain, Riddle will have to shift his focus on Reeves, who poses a significant threat to The Original Bro on the road to TakeOver.

Can NXT’s favorite Bro shake off any sign of fatigue following the daunting Fatal 5-Way Match, and pull out a victory? Find out this Wednesday at 8/7 C, only on WWE Network.