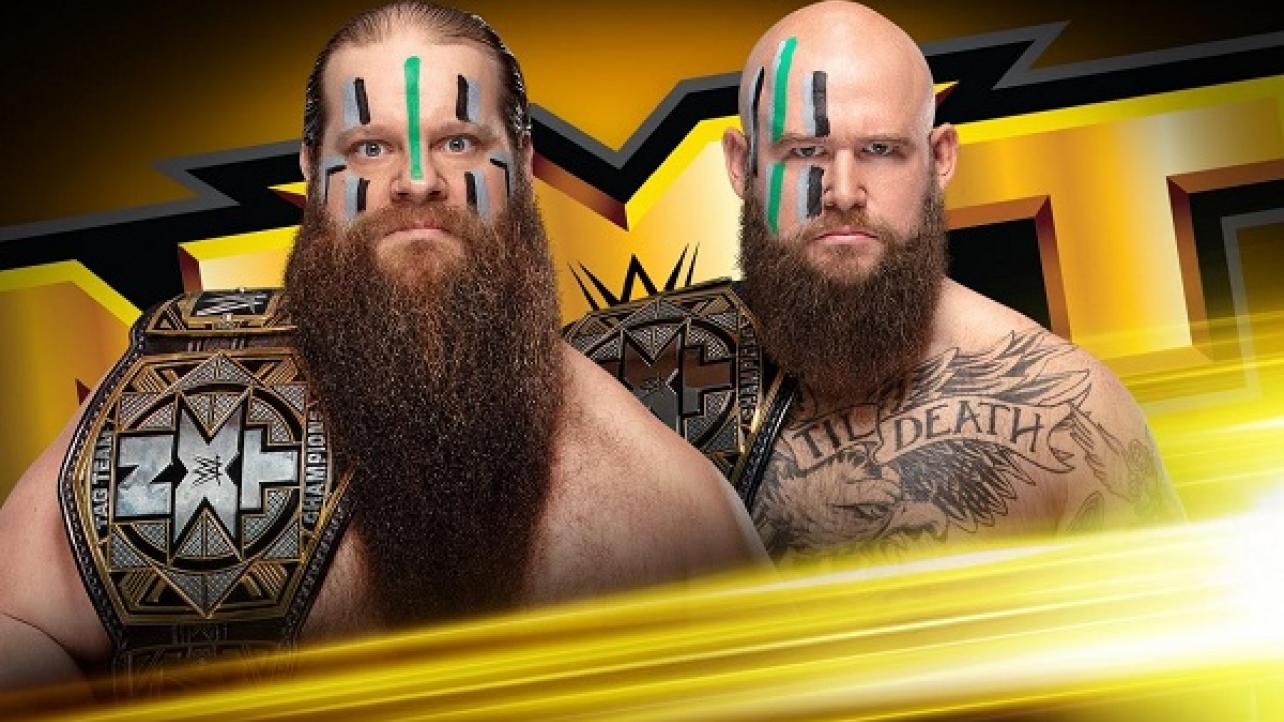 WWE returns to the WWE Network on Wednesday evening with this week’s episode of NXT TV from Full Sail University in Winter Park, Florida.

WWE NXT preview, May 15, 2019: Viking Raiders to address their future in NXT

As TakeOver: XXV draws near, Raw Superstars and reigning NXT Tag Team Champions The Viking Raiders return this week to let the world in on their plans for the future. Find out what’s next for Erik & Ivar when NXT streams this Wednesday at 8/7 C on the award-winning WWE Network.

Where do The Viking Raiders, and the NXT Tag Team Titles, go from here?

NXT Tag Team Champion The Viking Raiders’ status in the black-and-gold brand has been the subject of much speculation since Erik & Ivar debuted on Raw. This week on WWE Network, the champions will make their booming voices heard when they appear live at Full Sail.

Although the bearded brawlers have already made their presence felt in a big way on Monday nights, they still hold the top prize in NXT’s Tag Team division — a fact that none of NXT’s other duos has forgotten. If you need evidence, look no further than The Forgotten Sons’ ruthless guerrilla attack on The Viking Raiders last week, which showed that Erik & Ivar are squarely in the crosshairs of The Savages of NXT.

How will The Viking Raiders respond, and what does the future hold for them in NXT? Find out this week on WWE Network.

To say Kushida’s NXT debut was a smash success would be an understatement. Against the venerable and vicious Kassius Ohno, NXT’s newest Superstar made an unforgettable first impression. He showed true grit (enduring The Knockout Artist’s high-powered strikes), uncorked a few home runs of his own (his wind-up punch seemed powered by no fewer than 1.21 gigawatts) and forced Ohno to submit to the Hoverboard Lock. Kushida looks to go 2-0 this week when he returns to compete between the yellow ropes of NXT.

An ERA in dispute

When we last saw The Undisputed ERA, team captain Adam Cole was lambasting Roderick Strong for his involvement in Cole’s match against Matt Riddle (a bout that Cole lost). After weeks of mounting tension between the two teammates, Cole’s latest outburst was possibly the straw that broke the camel’s back, as Strong responded by ripping off his Undisputed ERA shirt and throwing it in Cole’s face as The Panama City Playboy was being held back by Kyle O’Reilly and Bobby Fish.

The Undisputed ERA are as tightknit a crew as you’ll find in NXT or WWE, but that doesn’t mean they’re invincible to infighting. Will the system-shocking stable get back on the same page, or are we witnessing the end of an era?

Can Jessie fog The Vision?

Vanessa Borne and Aliyah might consider everyone else in the NXT a “lower,” but don’t expect Borne’s opponent this week on NXT TV — 2018 Mae Young Classic competitor Jessie — to co-sign that statement.

Armed with world-class athleticism and a contagious sense of joy, the up-and-coming Jessie has been a favorite of the NXT Universe any time she’s competed, including during the recent Women’s Battle Royal on WWE Worlds Collide. However, she is also in pursuit of something other than NXT fan approval, namely, a big win on WWE Network. Will Jessie hit the jackpot this week, or can The Vision, whose ruthlessness and in-ring repertoire seems to grow by the day, rain on her parade?

It’s been a while since the NXT Universe has basked in the glory of Keith Lee, but that all changes this week on WWE Network when The Limitless Superstar returns to action. After an injury pushed Lee to the sideline for weeks, the 320-pound hybrid athlete — whose absurd combination of size, speed and agility has blown minds — is back at full strength and looking to make up for lost time.