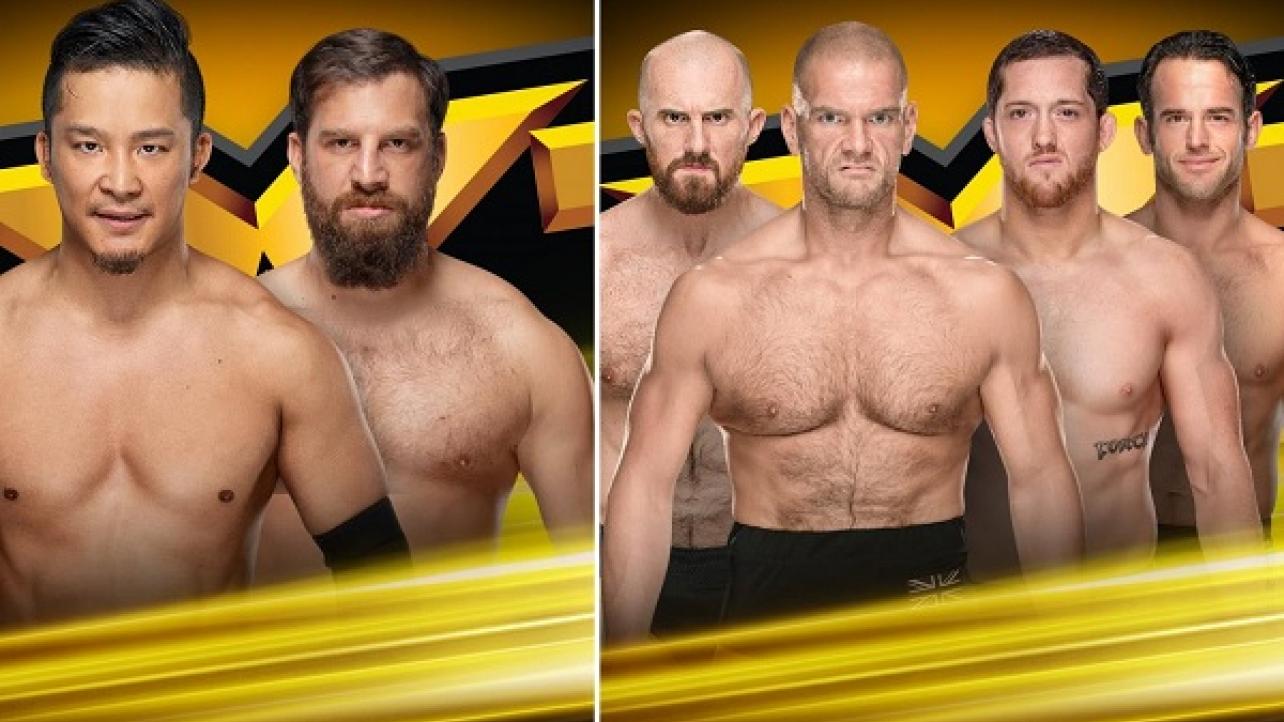 WWE returns to the WWE Network this evening for the latest weekly episode of NXT TV from the APG Federal Credit Union Arena in Baltimore, Maryland.

From the technical precision of Kushida vs. Drew Gulak in a Submission Match, to the smash-mouth stylings of Danny Burch & Oney Lorcan vs. The Undisputed ERA, this week’s NXT double main event has all the action you can handle. Plus, Io Shirai & Candice LeRae join forces to take on The Four Horsewomen’s foot soldiers, Marina Shafir & Jessamyn Duke, in a long-awaited grudge match.

No calm after the storm of TakeOver: XXV

The Street Profits emerged from TakeOver: XXV’s chaotic Fatal 4-Way Ladder Match with the NXT Tag Team Championship, while the three other squads involved in the clash hobbled away emptyhanded – but with plenty of bruises, a few lacerations and, in the case of Bobby Fish, an arm in a sling.

Although The Sultans of Swag now wear the crowns, ostensibly hitting reset for the entire division, there’s still residual ill will between the teams of Danny Burch & Oney Lorcan and The Undisputed ERA after TakeOver, setting the stage for this week’s main event. With Fish not yet cleared for action, Roderick Strong will fill in for his Undisputed ERA brother, pairing with Kyle O’Reilly to face The Boston Butcher and The Guv’nor. There might not be any steel ladders involved this time, but with four of NXT’s most dangerous Superstars set for battle, there will be no shortage of hard-hitting physicality to go around.

Kushida’s victory over Drew Gulak two weeks ago did little to change The Philadelphia Stretcher’s opinion of NXT’s latest blockbuster signee. Gulak deemed the Japanese Superstar a coward for gaining victory via pinfall instead of submission, and immediately challenged Kushida to fight him again in a Submission Match, where the only way to win is by forcing the other man to submit. Kushida didn’t hesitate to pick up the gauntlet, and NXT General Manager William Regal has greenlit the match for this week on WWE Network.

Both Kushida and Gulak are masters of the grappling arts who have preferred methods for forcing opponents to tap out: Kushida has scored countless victories with the shoulder-tearing Hoverboard Lock, whereas Gulak’s prized Gulock has caused many Superstars to cry uncle. Whether one of these holds will secure the win remains to be seen, but this much is for certain: A painful encounter is in store.

Io Shirai & Candice LeRae are overcome with rage directed toward The Horsewomen, and Jessamyn Duke & Marina Shafir must deal with that fury tonight when the two sides square off in tag team competition.

Tenacious C & The Genius of the Sky formed a bond after being targeted by Duke, Shafir and NXT Women’s Champion Shayna Baszler in separate incidents. The alliance has already proven beneficial: Shirai saved LeRae from a three-on-one beating last month, and LeRae returned the favor at TakeOver: XXV, when she prevented Duke & Shafir from interfering in the NXT Women’s Title Match between Baszler and Shirai. Although Shirai felt short of victory at TakeOver, she revealed an uncharacteristically vicious side of herself as she battered Baszler with a Kendo stick and steel chair after the bell.

Will Duke & Shafir be prepared for Shirai & LeRae’s combined firepower? To find out, tune in to NXT when it streams tonight at 8/7 C on the award-winning WWE Network.