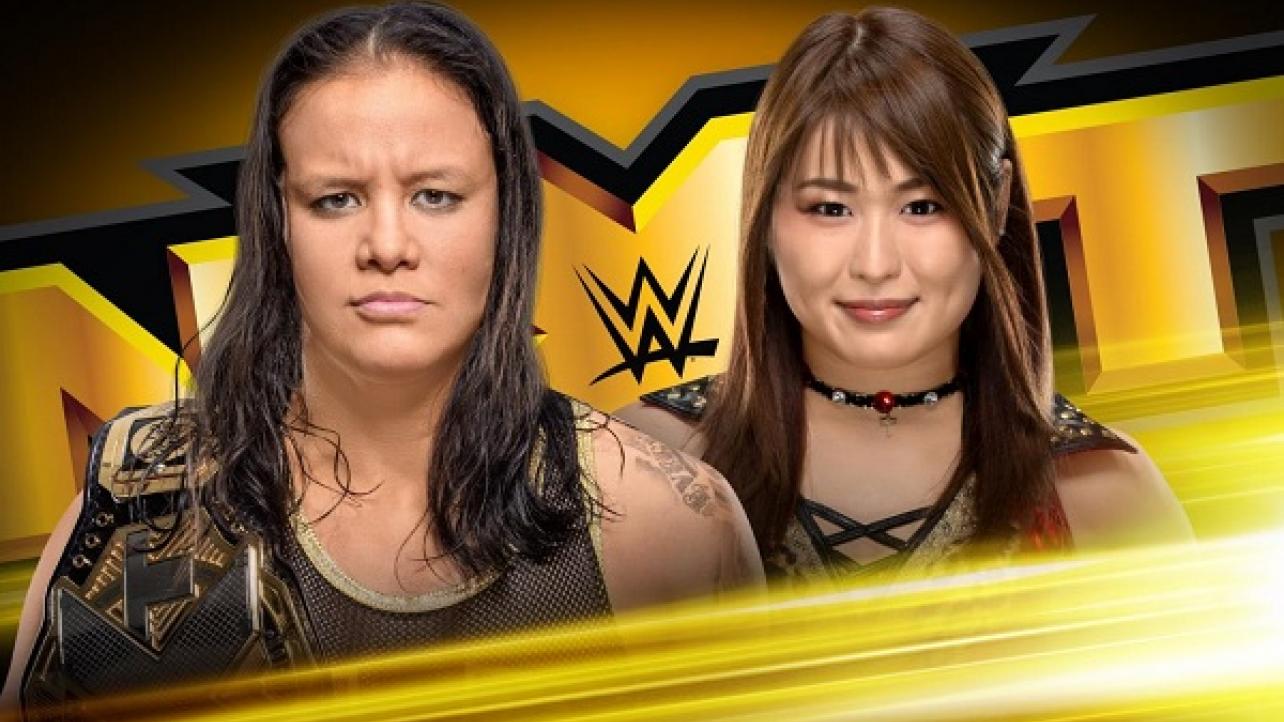 WWE returns to the WWE Network this evening for this week’s episode of NXT TV from Full Sail University in Winter Park, Florida.

History will be made this week when Io Shirai challenges NXT Women’s Champion Shayna Baszler for the title in the first Women’s Cage Match in NXT history! Plus, newly crowned NXT Tag Team Champions The Street Profits battle The Forgotten Sons, the inaugural Breakout Tournament gets underway and much more.

Weeks removed from their classic battle at TakeOver: XXV, NXT Women’s Champion Shayna Baszler and Io Shirai are set to collide in a title rematch this week on WWE Network. But unlike any of their previous wars, this conflict will take place in the only fighting ground capable of containing their fury: A steel cage.

Although The Genius of the Sky fell short of capturing the title at TakeOver, she gave The Submission Magician one of her most grueling challenges to date. Moreover, Shirai gave Baszler a painful reckoning after the bell, using a Kendo stick and a steel chair to dish out an uncharacteristically ruthless attack on the champion. The enmity heightened even further on June 12, with Shirai and Baszler throwing down in a wild brawl that sprawled throughout the arena.

In the past, Superstars like The Horsewomen’s Jessamyn Duke & Marina Shafir and Candice LeRae have interjected themselves into this intense rivalry. Yet, with a steel cage surrounding the ring, that possibility is all but thrown out the window tonight, leaving bitter enemies Baszler and Shirai to settle the score one-on-one, with the prestigious NXT Women’s Title on the line.

For new NXT Tag Team Champions The Street Profits, the time for celebration has ended. It’s now time to get back to work, and that means a showdown with two of the black-and-gold brand’s roughest brawlers, The Forgotten Sons’ Steve Cutler & Wesley Blake.

Not that Angelo Dawkins & Montez Ford would have it any other way. The Sultans of Swag are no strangers to the grind, nor are they strangers to The Forgotten Sons. Even though all four Superstars are likely still feeling the effects of the wildly hard-hitting Fatal 4-Way Ladder Match at TakeOver: XXV, you can expect both teams to view this week’s match as nothing short of critical. The Street Profits’ hardware might not be at stake, but Dawkins & Ford know better than anyone how quickly momentum comes and goes in NXT’s competitive Tag Team division. The Savages of NXT, meanwhile, remain as determined as ever to make sure they never again take a back seat, and a strong showing against the titleholders could go a long way in ensuring that fate.

The excitement surrounding the NXT Breakout Tournament has continued to build since NXT General Manager William Regal’s announcement last week, and this week on NXT, the revolutionary competition gets underway with a First-Round Match between debuting Superstars Joaquin Wilde and Angel Garza.

Which NXT newcomer will step up, break out and move closer to earning a championship opportunity of his choosing? On one side of the ring will be Wilde, a fearless daredevil known for his off-the-top-rope innovations. Then there’s third-generation Superstar Garza, a multi-time champion in his native Mexico who carries himself with the pride and confidence that comes with being a member of one of lucha libre’s most esteemed dynasties.

Word to the wise: You won’t want to miss this.

Bask in the glory of Keith Lee

The Limitless Superstar has taken a mostly low profile in recent months, due in part to an injury that sidelined him, but his return to the ring earlier this month, which resulted in victory against Kona Reeves, proved that Lee is every bit as dominant as ever. Get ready to watch the perception-shattering big man blow more minds when he re-enters the squared circle this week on NXT, streaming Wednesday at 8/7 C on WWE Network.