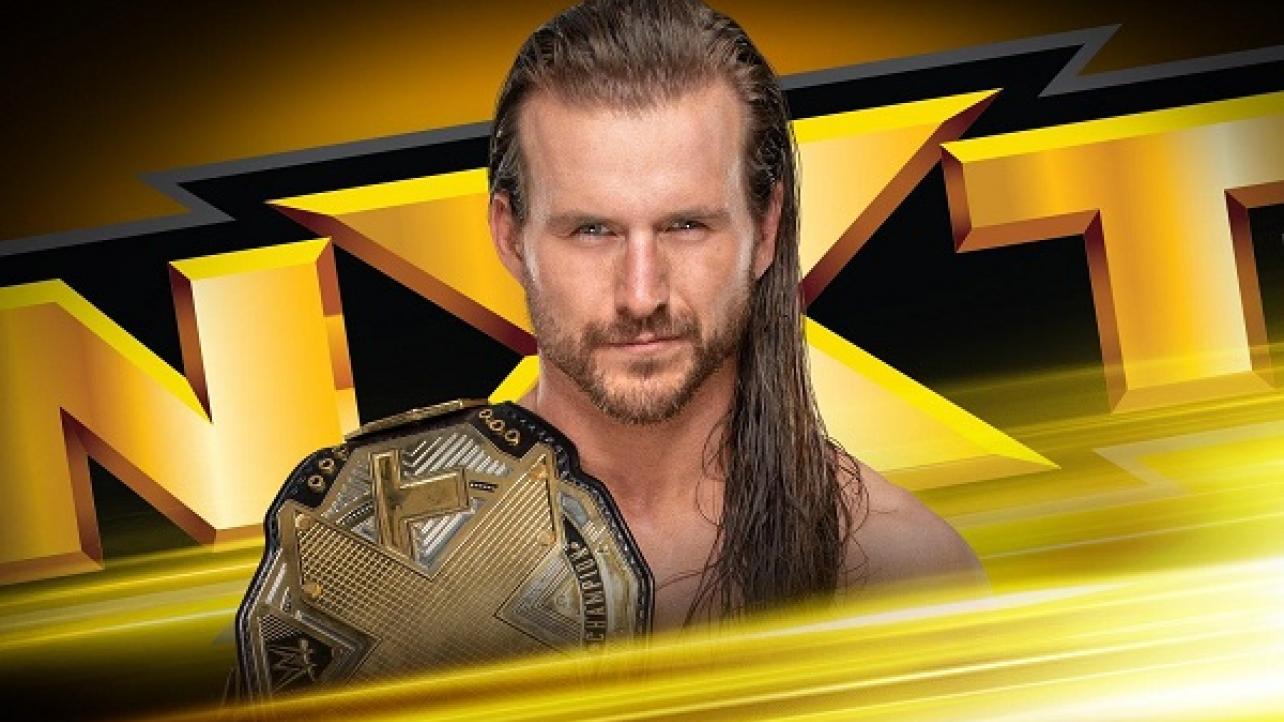 WWE returns to the WWE Network this evening with this week’s episode of NXT TV from Full Sail University in Winter Park, Florida.

Fresh off his Bay Bay Championship Tour, Adam Cole is prepared to put his NXT Championship on the line for the first time on NXT. Plus, SmackDown LIVE’s Apollo Crews returns to the black-and-gold brand to challenge Kushida, the NXT Universe gets its first look at Bronson Reed and Dexter Lumis in the Breakout Tournament, and more!

Now that he’s done flaunting his NXT Title and pouring salt in the wounds of Johnny Gargano on the transatlantic Bay Bay Championship Celebration Tour, Adam Cole is ready to get back to business with his first title defense on NXT TV.

The Undisputed ERA leader’s opponent is not yet known, but whoever receives the golden opportunity had better bring his A-game. Say what you want about The Panama City Playboy — his tactics are often underhanded, and his ego can’t be stroked enough — but given his willingness to put the title on the line mere days after defending it against Akira Tozawa at EVOLVE’s 10-year anniversary event, you can’t call him anything less than a fighting champion.

The elephant in the room, of course, will be Gargano. If Gargano’s involvement in Cole vs. Tozawa was any indication, it’s safe to assume that Johnny Wrestling will be keeping a close eye on the festivities inside Full Sail Live.

Apollo landing: Crews next to take on the Kushida challenge

Across all WWE brands, Kushida is the talk of the locker room. The Japanese icon, who remains undefeated in NXT competition, is in high demand, with Superstars coming from all directions to test themselves against the upstanding world-beater.

Although Kushida has vanquished every opponent so far, that could all change this week when he battles SmackDown LIVE’s Apollo Crews. The boulder-shouldered Superstar from Stone Mountain, Ga., is a show-stealer of the highest order, not to mention a beloved NXT alumnus. In his black-and-gold brand homecoming, 50 years and one day removed from the launch of the Apollo 11 spaceflight, can this Apollo enter the NXT stratosphere by dealing Kushida his very first L?

So far, the Breakout Tournament has featured no shortage of technical wizardry or high-flying risk-taking, but the complexion will likely be much different this time around, considering the immense statures and fistic styling of the two Superstars waiting to make their NXT debuts.

See who punches a ticket to a semifinal showdown with Cameron Grimes when Reed and Lumis throw down Wednesday at 8/7 C.

The fighting machine known as Matt Riddle has had a sensational summer, claiming singles wins over the likes of Roderick Strong, a pre-NXT Champion Adam Cole and, more recently, Drew Gulak. The self-described “stallion” looks to keep that momentum going this week when he faces Brazilian Superstar Arturo Ruas.

The Original Bro has redoubled his efforts to perfect every aspect of his game — from throws and takedowns to strikes and submissions — but if there’s ever an NXT Superstar who can hold a candle to Riddle’s combat-sports bona fides, it’s Ruas. The highly decorated grappler has spent years mastering a variety of fighting disciplines, and he’s coming off a big win against Anthony Henry at EVOLVE’s 10th Anniversary Special. Now that Ruas has tasted his first victory on WWE Network, will he be able to solve the riddle of The Original Bro?

What’s next for The Sultans of Swag?

Between being the defending champions in NXT and the newest tag team on Raw, The Curse of Greatness and King Tez certainly have their plates full, but they’ve never been known to back down from a challenge. How will The Sultans of Swag respond to the latest salvo from Fish & O’Reilly?