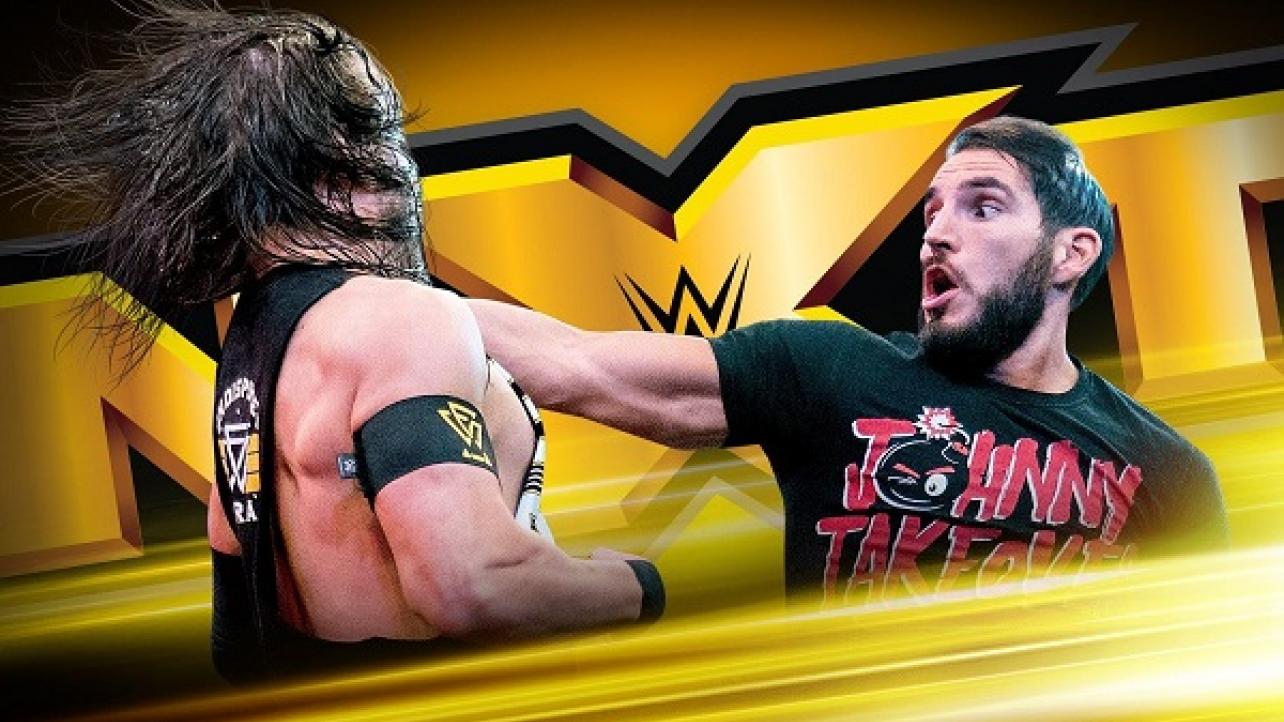 WWE returns to the WWE Network tonight with this week’s episode of NXT TV from Full Sail University in Winter Park, Florida.

This week, Johnny Gargano and Adam Cole will pick the stipulations for two of the falls in their hotly anticipated NXT Championship rubber match at TakeOver: Toronto. Plus, Keith Lee takes on Damian Priest in a colossal clash, the second round of the Breakout Tournament gets underway and much more.

Adam Cole and Johnny Gargano will round out their trilogy of NXT Title Matches at TakeOver: Toronto in a 2-out-of-3 Falls Match, but one key question still needs answering: What stipulations will Cole and Gargano pick for two of the falls in their bout?

That’s the opportunity that NXT General Manager William Regal has afforded the champion and challenger, and this week on NXT, The Panama City Playboy and Johnny Wrestling will reveal their choices to the world. Given the scorching hostility that exists between the two, it’s anybody’s guess what conditions Cole and Gargano will apply to their Aug. 10 title bout.

Keith Lee has a point to prove, and he’s looking to make it at Damian Priest’s expense.

Despite the great expectations that came with Lee’s arrival last year, the mighty Texan’s tenure has thus far had more starts and stops than a school bus route. Adding to his woes, new Superstars are emerging weekly, snatching up opportunities that Lee believes he deserves.

On a mission to “change the narrative,” Lee has called out the undefeated Priest, arguably the most imposing of NXT’s fresh faces, leading to this week’s potent main event. Will Lee remind everyone why we should all bask in his glory, or can the hard-hitting Priest add another notch to his belt as he continues his quest to “live forever”?

If you ask the new Io Shirai, she’ll tell you it’s all about “me, myself and I(o).” Competing for the first time since her brutal betrayal of friend Candice LeRae, Shirai is set to face blue-chipper Kacy Catanzaro this week on WWE Network.

Although Catanzaro’s endlessly breathtaking and utterly unique repertoire of moves have quickly made her a hit with the NXT Universe, the former “American Ninja Warrior” star will have her work cut out for her against the newly independent Shirai. As if The Genius of the Sky’s steep experience advantage wasn’t daunting enough, her devastating attack on LeRae and her curt mic drop last week suggests we’ll see an even more ruthless side of Shirai in the ring.

The NXT Breakout Tournament Semifinals kick off this week with a match between high-flyers Jordan Myles and Angel Garza. Both NXT rookies turned plenty of heads in the first round, with Myles surviving a gritty battle against Boa and Garza triumphing over resilient daredevil Joaquin Wilde.

While there’s no denying Myles and Garza have their similarities — both Superstars excel when the tempo picks up, thrive in the high-rent district and have smiles worthy of toothpaste endorsements — their attitudes couldn’t be further apart. While Myles is hungry yet humble, Garza seems to consider himself a cherubic gift to be shared with the world.

Disparate viewpoints aside, this match has all the hallmarks of an instant-classic. Even more important, it’s one step away from the finals, where an NXT title opportunity will hang in the balance. Expect Myles and Garza to leave it all in the ring.

Who will be next to experience Velveteen Dream?

TakeOver: Toronto is fast approaching and the NXT North American Champion Velveteen Dream is still without a challenger. Undisputed ERA’s Roderick Strong has staked his claim to that opportunity, citing his recent pinfall victory over the champion in six-man tag team action – but last we saw Dream, he remained unconvinced that The Messiah of The Backbreaker was man enough for the experience of a one-on-one showdown. Will the NXT Universe learn more about Velveteen Dream’s TakeOver dance card this week?

Tune in to NXT on Wednesday at 8/7 C on the award-winning WWE Network.