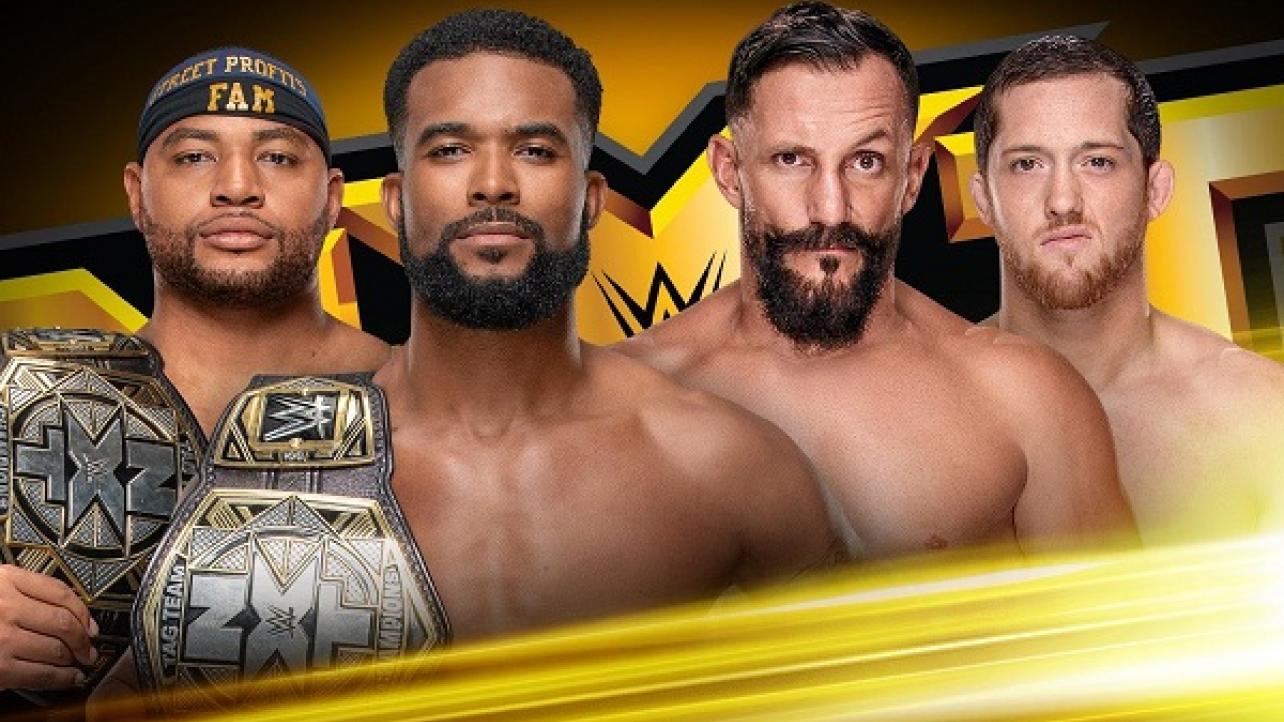 WWE returns this evening with their taped episode of NXT TV on the WWE Network from Full Sail University in Winter Park, Florida, one of the final four episodes to air before the black-and-gold brand moves to the USA Network with their new live, two-hour weekly format.

With The Street Profits’ NXT Tag Team Championship victory against The Undisputed ERA at TakeOver: Toronto tainted by controversy, Angelo Dawkins & Montez Ford prepare to put their title on the line this week in a high-stakes rematch with Bobby Fish & Kyle O’Reilly.

Love them or loathe them, Undisputed ERA’s Bobby Fish & Kyle O’Reilly were correct when they claimed The Street Profits pinned the wrong man to retain the NXT Tag Team Titles at TakeOver: Toronto. Indeed, video replay indicates that Fish tagged into the bout moments before O’Reilly was pinned.

Following that controversy, Fish & O’Reilly were singularly focused on righting the wrong, and their demands have been heard. This week on NXT, Undisputed ERA’s tandem terrors will challenge Montez Ford & Angelo Dawkins for the titles.

Can Fish & O’Reilly hold up their end of The Undisputed ERA’s golden prophecy and claim the faction’s third reign as NXT Tag Team Champions? Or will The Sultans of Swag defend their crown as the black-and-gold brand prepares to go live on USA Network next month?

An epic rematch six months in the making

Keith Lee and Dominik Dijakovic will look to settle some unfinished business this week when they clash in a long-awaited rematch on NXT.

The two high-flying heavyweights last met in February, and the result was a high-octane, cutting-edge battle that ended in a double count-out, denying the longtime rivals the opportunity to find out who the better big man was in their first clash inside an NXT ring.

Dijakovic’s knee surgery delayed their hotly anticipated rematch, but now that The Rare Breed is cleared for action, his duel with Lee is back on the books, much to the delight of both Superstars. Lee is desperate to get back on track after a pivotal loss to Damian Priest, while Dijakovic looks to make an impact at Lee’s expense in his NXT TV return.

Trust us, you won’t want to miss this battle between giants who move like Cruiserweights. Tune in to NXT this Wednesday when it streams at 8/7 C on the award-winning WWE Network.

For the first time since defeating Candice LeRae in an instant-classic grudge match at TakeOver: Toronto, Io Shirai returns to the ring this week on WWE Network.

Shirai was an elite Superstar long before she embraced her dark side, but her diabolical change of heart has given The Genius of the Sky an even more intense edge than before. That spells terrible news for anybody unfortunate enough to stand across the ring from her.

After coming within inches of winning the NXT North American Title at TakeOver: Toronto, Pete Dunne will speak his mind in a sit-down interview this week. With questions about The BruiserWeight’s status on the black-and-gold brand remaining unanswered, expect the longest-reigning WWE U.K. Champion in history to set matters straight.

Johnny Gargano, the heart and soul of NXT, hasn’t been seen on WWE Network since losing to NXT Champion Adam Cole in an incredible 2-out-of-3 Falls Match at TakeOver: Toronto. With much of the NXT Universe wondering what the future holds for Johnny Wrestling, get set to look back at Gargano’s greatest moments in an NXT career retrospective Wednesday on WWE Network.