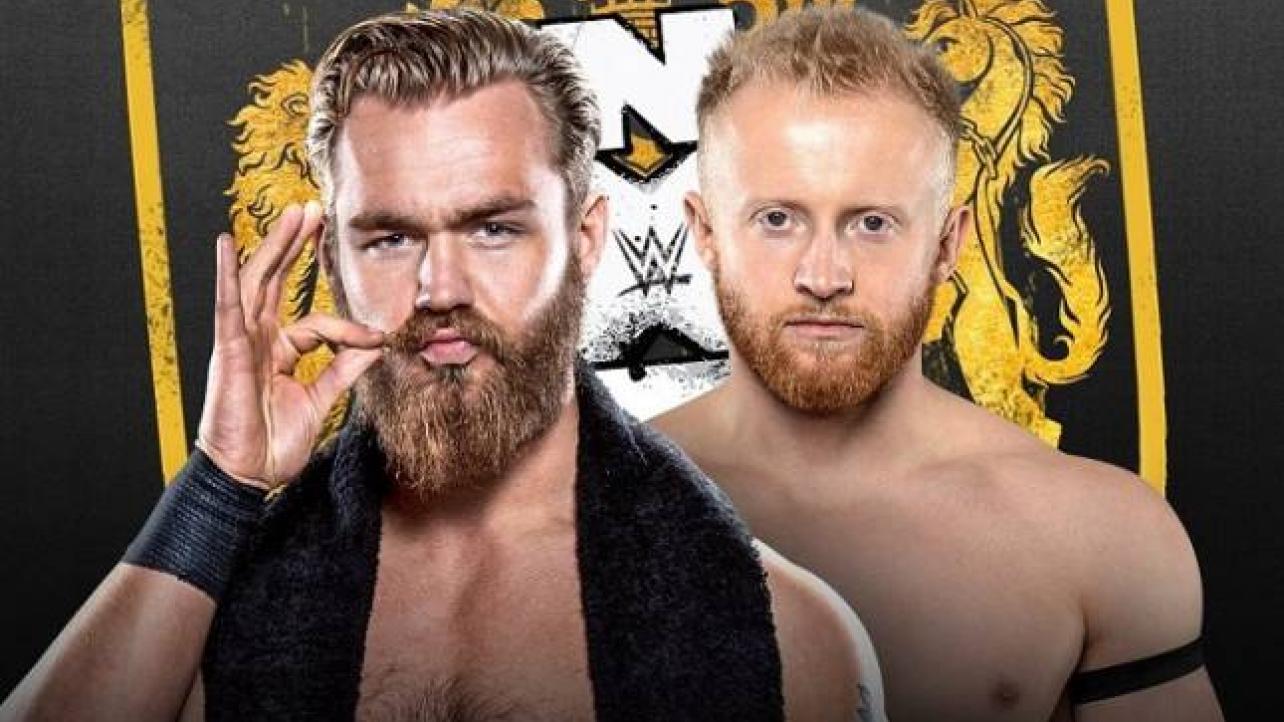 Hello again wrestling fans, and welcome back to the NXT UK Recap. This edition of the show is centered around a main event matchup of future WWE stars. Let’s get down to it!

⁃ The show kicks off with the usual opening intro, and the announce team welcomes viewers to the B.T. Sports Studios.
⁃ Isla Dawn makes her way down the ramp, and she’s in the first match.

The opening bell sounds, and McKenzie quickly charges at Isla. Emilia unleashes a fury of offense, until Dawn briefly turns the tables. McKenzie continues to unleash hell, and lands a drop kick on Dawn. Emilia tries a quick cover, and remains in control of the match with a suplex. Isla eventually scurries towards the ropes, and she catches Emilia slipping with a veteran maneuver. Isla lands a big takedown, and tries a cover, but Emilia is still in it. Isla goes for a suplex variation, but McKenzie blocks, and Isla applies a small package. Emilia kicks out, and makes her way to the apron, but Dawn knocks her to the floor. Isla follows up with a penalty kick to the chest of McKenzie, sending her into the ringside area. Both ladies fight on the outside, until E turns things around, and rolls Isla back into the ring. Emilia and Dawn go exchange blows in the ring, until Dawn counters with a knee to the gut. Dawn follows up with a backdrop driver, and tries to follow up with a suplex, but Emilia fends her off. McKenzie forces a bit of separation, and nails a spear, before applying a pin for a close near fall. Dawn regroups, and begins to shake off the spear, before landing another huge body blow to Emilia. Dawn gets a crazy look in her eyes, and she’s “channeling spirits,” but Dawn takes to long. Emilia takes advantage of the pause, and begins to toss Dawn around the ring, before going into the corner. Emilia sets up to put the match away, and she nails a stiff kick to the back of Dawn’s head for the 1-2-3.

⁃ After the match: Highlights of WALTER assaulting Ilja Dragunov are shown.
⁃ Backstage: Wolfgang and Mark Coffey are playing paper, rock, scissors, while talking about recent victories.

Both men start off slow, and exchange holds, as well as reversals. Bate and Starz back off briefly, and tie up again, but neither guy can control things. Tyler and Jack tie up again, and Starz applies a wrist lock, until Bate reverses. Tyler locks on an arm bar, but Starz quickly exits the hold. Tyler manages to apply the hold again, and takes Starz to the mat. Jack eventually fights back up, and finds himself on the shoulders of Bate. Tyler drops him with a fireman’s carry variation, but Starz quickly regroups. Jack fires up with a flurry of offense, until Bate smacks him down, and time runs out on the round.

The second round bell rings, and Bate comes out strong. Tyler and Jack exchange thunderous strikes, and numerous reversals, until Bate steals one with a roll up.

The round begins quickly, and both men are still struggling to gain the advantage. Tyler wrestles Starz down to the mat, but Jack fights back up, and picks up the pace. Starz lands drop kick after drop kick, and heads into the corner. Starz charges at the opposite corner, and lands a European uppercut on Bate, following up with a suplex for a very close near fall. Bate quickly hops up, and lifts Starz for an airplane spin. Starz pops off of the shoulders, and briefly does his own airplane spin on Bate, until dropping him on the mat. Bate tries a maneuver, but Starz catches him, and turns it all into a pin for the 1-2-3.

The fourth round kicks off just like the others, and Starz eventually locks on a sharpshooter. Tyler struggles to make it to the ropes, and Jack pulls him back into the center of the ring. Bate manages to escape, then lands bip and bop from out of nowhere. Tyler stuns Jack, allowing Bate to hit the Tyler Driver ‘97 for the 1-2-3.

⁃ After the match: Mark Coffey and Wolfgang approach the ring. Coffey lands a cheap shot on Bate, and runs away.

⁃ After the break: Sid Scala confirms that Subculture will have a number one contender’s opportunity soon.

The new NXT Women’s Champion makes her way to the ring, and she has something to say. “The Final Boss” says “I’m now the champion, and this makes me very happy. NXT UK is my home, and I…” Meiko is cut off by Nina Samuels, who says “I’m here to congratulate you. You and Kay Lee Ray showed why NXT UK is the place to be, and now you’re the NXT UK Women’s champion. Bravo, bravo.” Samuels continues, and says “in order to live up to Ray’s title reign, you need a mega star like me to defend your title against.” Samuels goes on and on, until Amale attacks her from behind. Amale gets on the mic, and speaks in French, before stating “I’m sick of the same girls every week. I should be the next challenger… I’m not here to play games.” Meiko slaps Amale, and tells her “enough talking! You get the match!” The segment ends with Meiko standing tall, and the show heads to the back.

⁃ In the locker room: Rampage Brown and Joe Coffey are still recovering from last weeks brutal main event. They seem to have a mutual respect for each other’s power.

⁃ Back from the break: A vignette airs, and its Blair Davenport. Blair is formerly known as Bea Preistley.
⁃ Back in the studio, Mila Smidt is already in the ring.

The match begins, and both women begin to feel each other out. Smidt tries to go for the legs of Valkyrie, and Aoife stops her with a brief hold. Smidt fights out briefly, but Aoife slams her into the mat. Valkyrie begins to work over the arm of Mila, who forces Aoife to run the ropes. Valkyrie rebounds with a takedown, and she’s in control of things, until Mila lands a takedown of her own. Smidt follows up with a quick suplex, and tries a pin, but no luck. Aoife quickly shakes it off, and begins to fire up with multiple strikes to the chest, but Mila won’t go away. Mila lands a surprise suplex, and shows off her amateur wrestling background, as Jinny makes her way to the stage. Aoife capitalizes on the distraction, and takes Mila down, before heading to the top rope. Valkyrie comes crashing down with a leg drop to the back of the neck of Mila for the 1-2-3.

⁃ After the match: Teoman runs down Nathan Frazer.

⁃ After the break: Eddie Dennis approaches Trent Seven, who is doing media. They have an exchange, and will have a match next week.

The main event bell sounds, and we’re off to the races. Both men struggle to find the advantage out of the gate, and exchange multiple holds, as well as counters for each hold. Devlin and Kid show off their unique skill sets, going tit for tat with counter after counter. Both men eventually stand, and put on an impressive grappling display. A test of strength briefly breaks out, but Kid grounds Devlin with a headlock variation. They both make it back up, and the impressive display continues. Both men show crazy agility, and go move for move, until Devlin tosses Kid to the outside. Kid takes a nasty fall, and Devlin goes in control of things. Devlin drags Kid into the ring, and hooks the leg for a pin fall attempt, but Kid is still in it. Devlin elects to slow things down a bit, and he’s in full control of the match. Devlin nails a suplex, and looks to end the match, but Kid kicks out. Devlin remains in control of things by cranking the neck of Kid, and lands a few blows to the back for additional damage. Devlin forces Kid chest first into the ropes, and hits a stiff shot to the back on the rebound. Kid comes back to life, and lands a hard strike, sending Devlin into the corner. Devlin is stunned, allowing Kid to hit a cutter from out of nowhere. Both men go down, but Devlin makes it back up first. Kid rocks Jordan with a dropkick, followed by a suplex into a bridge for a close near fall. Kid continues to pick up momentum, and applies a nasty submission hold to Devlin. Jordan somehow powers Kid up, and hits a few suplex’s, followed by knees to the ribs. Devlin tries to follow up, but Kid suckers him in, and hits knees to the midsection of Devlin. Kid briefly applies a triangle chokehold, but Devlin forces a rope break. Kid begins to look confident, and hits strike after strike on Devlin. Kid tries another submission, but Jordan fights him off briefly, and Kid goes right back to the hold. Devlin forces Kid to run the ropes, and who hits a standing Spanish fly on Jordan from out of nowhere! Kid quickly goes for an arm bar, and Devlin gets a toe on the rope, forcing yet another rope break. Both men look like they are hurting, and they exchange blows from their knees. They eventually make it all the way up, and a hockey fight breaks out. Kid lands a surprise flying a forearm, and applies a cover, but Devlin kicks out on instincts. Kid keeps things going with a suplex, and he’s doesn’t release the waist of Devlin. Kid hits a second suplex, and goes for another, but Devlin gets to the ropes. Jordan stuns Kid for a moment, and goes to the outside, where Kid stays on the attack. Kid and Devlin fight at ringside, until Kid rolls Jordan into the ring. Devlin grabs the rope on the way in, and causes it to snap into the face of Kid, allowing Jordan to take control. Devlin forces Kid hard into the steps, and then drops Kid knee first onto one of them. Jordan rolls Kid back into the ring, and he sets up for the Devlin Side. Kid reverses, and takes Devlin down. Kid goes into the corner, and sets up for a dropkick, but Devlin catches the leg. Jordan applies a submission hold, and almost forces the tap out, but Kid gets the ropes. Devlin changes to an arm bar, and switches to an absolutely disgusting leg hold. Kid wastes no time tapping out, as the announce team screams for Devlin to stop, and the referee quickly calls for help from the back.

⁃ After the match: Devlin stands tall, as the medical team helps Kid, and the show fades to black.

Superstar of the Night:Jordan Devlin