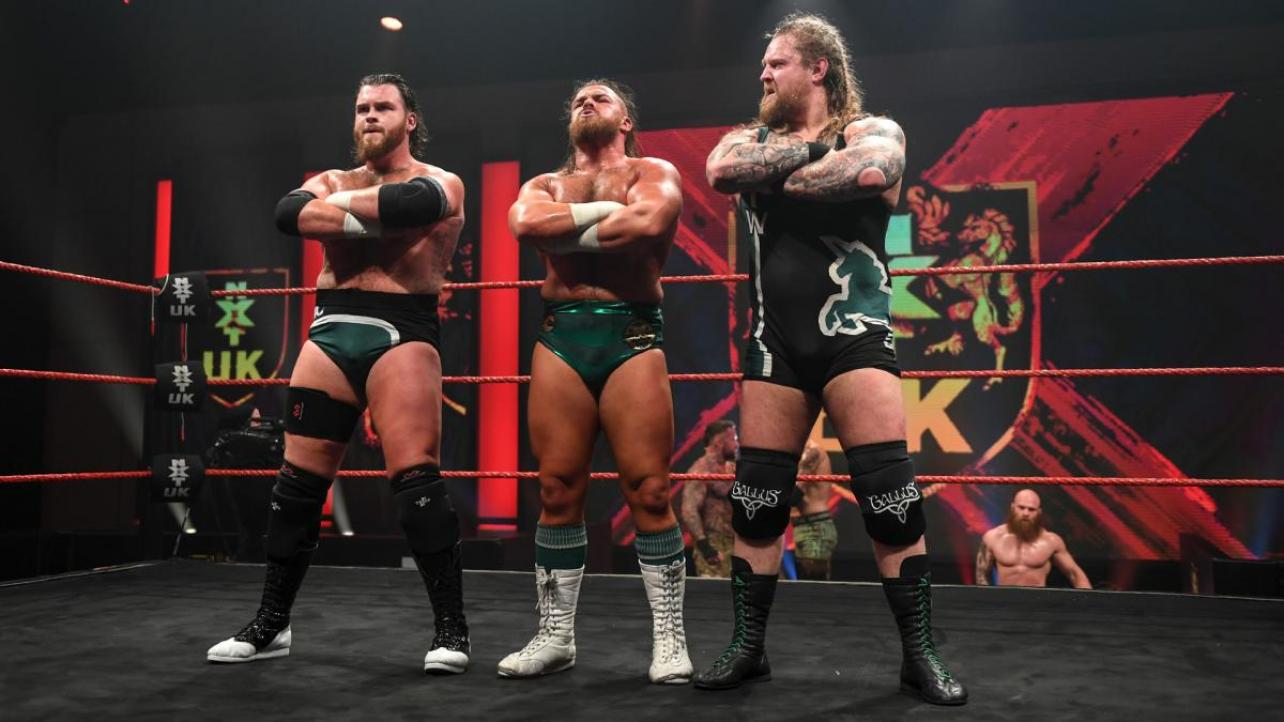 Hello again wrestling fans, and welcome back to the NXT UK Recap. This edition of the show is centered around a main event matchup between Tyler Bate, and Mark Coffey. Let’s get down to it!

⁃ NXT UK kicks off with a graphic to honor the late Paul Orndorff, and the usual opening intro plays.
⁃ Triple H starts the show with a message to NXT UK fans, and tells viewers that “next week, WALTER will battle Ilja Dragunov, for the NXT UK Championship.”

Sid Scala begins by warning each man, telling both “there will be no physicality tonight.” Alex McCarthy from TalkSport begins by asking WALTER if he’s worried about Dragunov, and the Champion tells him “No. When I step in the ring, it’s a chance to honor professional wrestling. Ilja is a fantastic athlete, but he doesn’t have the mentality to step up to my level.” Ace from BBC Extra joins the fun, and he wants to know what Ilja has learned since losing to WALTER last year. Ilja tells him “sometimes you lose, and you get better, but failures like this hurt your mind. You can’t forget it, the memories haunt you, and somewhere I lost control. I needed to learn from all of this, and now I’m prepared.” Alistair McGeorge from Metro.Co.UK chimes in, and he asks about what will go down next week. Ilja responds first, and explains “this time people will forget what violence means, and the outcome will be different.” The Champion interrupts, and tells Dragunov “last time we wrestled you were just happy to be a part of it. I’m tired of seeing you be sad about yourself. You’re a fraud… you’re not good enough, and you’re not on my level. You’re all show, and you want to grab the attention of everyone else to get in this position.” WALTER becomes infuriated, and begins shouting in his own language. Dragunov mumbles a bit in response to the Champion, before saying “I have respect for you, because every time I step in the ring with you I get better. But I hate you… I hate you for the person you have made me into. I hate you for breaking something inside me, and next week I will break you in this ring. I will walk away with the NXT UK championship, or I won’t walk at all.” Both men come face-to-face, as Sid Scala exits the ring, and the show heads to a break.

⁃ When the segment comes a close, Subculture vows to become the first ever Two-Time NXT UK Tag Team Champions.

⁃ On the other side of the break, a referee is in the ring, and it’s time for action from the men’s division.

The opening bell sounds, and Smith begins with Teoman. Ashton starts quickly, and pounds away on Teoman. Smith beats Teoman all around the ring, and remains on the attack with stiff forearm shots to the midsection. Teoman briefly stops Smith, but Ashton is too powerful for him. Smith hits a vertical suplex, and Teoman quickly scurries to tag in Raja. Smith tags in Carter, and Oliver immediately drops Rohan with a super kick. Carter tries a cover, and Raja kicks out at one, before tagging in Teoman. Teoman begins to work over Carter, and hits a few forearms, before delivering a strike to the sternum. Teoman cuts off Carter from his partner, and tags in Raja, who rushes into the ring. Rohan hits a vertical suplex of his own, and tries a cover, but Carter is still in it. Raja tags Teoman back in, as the heel team takes full control of the match. Teoman works over the left arm of Carter for a moment, and the heels trade quick tags in and out. Carter nearly makes it to his own corner, but Teoman cuts him off, and attempts to lock on the crossface. Teoman changes gears, and decides to stomp on the arm of Carter, setting it up for a crossface later on. Teoman makes a mistake, allowing Carter to tag in Smith, who is completely turned up. Smith hits clothesline’s on both heels, and slams Teoman into the mat, following up with a pin for a very close near fall. Smith looks to capitalize on the momentum, and works over Teoman in the corner, until he’s cut off by a double team maneuver from the heel team. Rohan nearly steals a victory, but Smith is still pretty fresh, and still ready to fight. Smith tags Carter back in, and Oliver hits a suplex, followed by a super kick on Teoman for the 1-2-NO! Smith and Carter hoist Teoman up in the air, and hit a wicked double-team maneuver, but they can’t make the pin. Teoman rolls to the outside to speak with Raja, and Carter follows both men with a huge dive. Back in the ring, Carter looks to stay in control of the match, but Teoman grabs his legs from ringside. Raja plants Carter face first into the mat, and tags in Teoman, who immediately forces Carter to tap out with the crossface.

⁃ Earlier this week: Sid Scala gives an update on A-Kid. The former Heritage Cup Champion interrupts him, and demands an Ironman match against Jordan Devlin.
⁃ In a vignette: Aoife Valkyrie tells viewers “I’m here to be the best, and I’m prepared to climb.”

⁃ When the show returns, Pretty Deadly sends a message to Subculture, calling them “outcast’s.”
⁃ Up next, the NXT UK Women’s Championship is on the line.

After the Championship match introductions, the opening bell rings, and it’s on! Amale and Meiko tie up to begin the match, and Satomura drives Amale into the ropes. The referee forces a break, as both women separate, and begin to grapple again. Satomura takes Amale down with a headlock, until Amale grabs the hair of the Champion. Amale continues to grab the hair, until the referee nearly calls for a disqualification. Satomura runs the ropes, and hits a Thesz press on Amale, then follows up with a nasty submission hold. Amale manages to roll through, and nearly scores a roll-up, but Meiko is still in it. Amale fires up on Satomura, and tries a cover to force Meiko to kick out, frustrating Satomura in the process. Meiko takes things up a notch, and begins to repeatedly kick Amale, until taking her down with a flying forearm. Meiko continues to pick up the pace, and lands a few more thunderous kicks, until Satomura finally hacks Amale down for a cover. Amale kicks out at two, and tosses Meiko into the corner. Amale follows up with a running strike to the face, and comes behind that with a swinging neck breaker! Amale makes the cover, and the referee nearly makes it to three, but Meiko won’t go away. Amale looks to keep her momentum going, and lands strike after strike, until Satomura blasts Amale with a kick to the face. Meiko remains in control, before Amale nails Satomura with a heartbreaker from out of nowhere! Amale makes the cover, and the referee counts the 1-2-NO!! Satomura becomes desperate, and lands more brutal kicks, until the Champion delivers Scorpio Rising for the 1-2-3.

⁃ After the battle, the announce team recaps the match, and sends the show to a break.

⁃ When NXT UK returns, the NXT UK announce team breaks unfortunate news. The NXT UK Championship match between WALTER and Ilja Dragunov has been cancelled, due to an “undisclosed injury”.
⁃ Nigel announces that the Supernova Session’s is set for next week, as Gallus makes their way down the ramp.

The opening round starts off slowly, as both men start to feel each other out. They decide to tie up, and go into the ropes, where the referee forces a break. Coffey grabs a hold of Bate’s arm, and attempts to apply a submission hold, but he can’t quite get it. Bate tries to roll out, and Coffey will not let go. Bate breaks free, and tries a hold of his own, as Coffey rolls through. Neither man is able to gain an advantage, until Coffey finally grounds Bate with a simple wrist lock. Bate works back up to his feet, and runs the ropes, before trying a crossbody maneuver. Coffey blocks, and a bit of chain wrestling breaks out, until time runs out on the round.

The second round starts off with a tie up, and Coffey quickly applies a hammerlock on Bate. Mark grinds Tyler into the mat, while Bate tries to fight him off. They begin to run around the ring a bit, until Bate sends Mark to the outside. Coffey makes his way back into the ring, and gets caught with a roll up, but he kicks out quickly. Bate follows up by applying an even tighter roll up, and picks up the second round win.

Both men begin the round just as the last one started, and Coffey uses his power to ground Bate once again. Mark applies a headlock on Tyler, and Bate fights out of it. Bate begins to fire up on Coffey for a moment, until he gets caught by Mark, who tosses Tyler across the ring. After Bate finally lands. Coffey hits a Russian leg sweep, and follows up by driving Bate into the corner. Bate falls back into the middle of the ring, and lands right in position for a stiff forearm shot from Coffey, who applies a pin for the 1-2-3.

The fourth round begins quickly, and Bate tries to use his speed to avoid Coffey. Mark finally gets his hands on Bate, who cuts him off, and tries another roll up. Coffey kicks out, and hits a hard shot to the back of Bate, before applying a cover. The Champion kicks out, and picks up the pace, then takes Coffey down with an exploder suplex. Bate connects with another maneuver, and lays across Coffey for a pin attempt. Coffey kicks out, and Bate hoists Mark into the air for an airplane spin. Coffey fights off of the shoulders, and connects with yet another shot to the back, as both men fall to the mat. Coffey is up first, follow by Bate, who lands a dropkick. Both men go down once again, as signs of wear and tear show, while the round comes to a close.

Both men trade multiple shots to begin the round, and Coffey drives Bate shoulder first into the post. Coffey catches Bate with a roll up, and nearly steals the match, causing Bate to turn things up a bit. Bate hits rapid fire strikes, followed by bop and bang, before setting up to put away Coffey. Bate loads up, and hits the Tyler Driver ‘97 for the 1-2-3.

⁃ After the final bell, the announce team recaps the match, as Gallus comes face-to-face with Mustache Mountain. Both teams shake hands, as the show fades to black.

Superstar of the Night:Tyler Bate