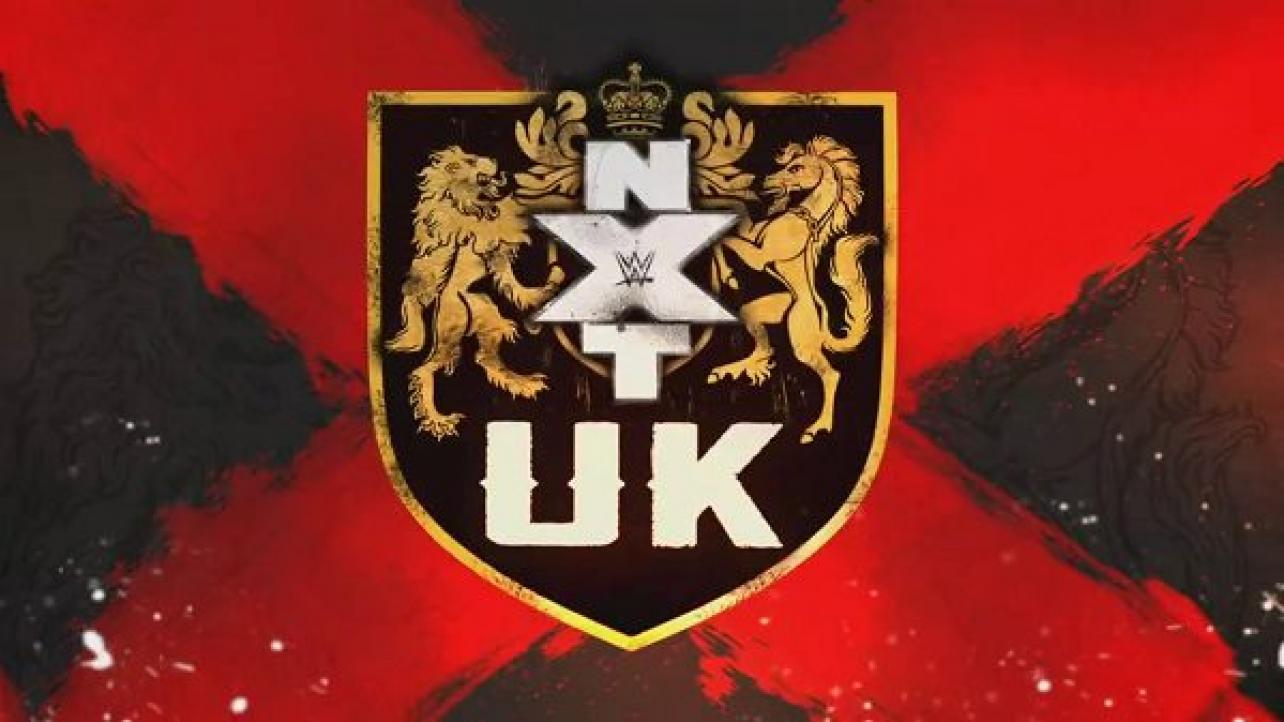 Hello again wrestling fans, and welcome back to the NXT UK Recap. This edition of the show is centered around a main event matchup between Moustache Mountain and Symbiosis. The NXT UK Tag Team Champions will certainly be watching, so let’s get down to it!

⁃ NXT UK kicks off with the usual show opening video package.
⁃ Jordan Devlin makes his way down the ramp, and he’s in the first match.

The opening match bell rings, and the match is underway. Both men tie it up in the center of the ring, until Devlin scores a quick takedown. Both men stand back up, and Devlin takes Archer right back down, grinding the knee into the ribs of Tristan. Archer uses his strength to reverse the hold for a moment, but Devlin regroups, and nails Archer with a dropkick. Devlin tries a quick cover, and begins to lay in stiff shots to Archer, as Tristan tries to regroup. Archer briefly halts the momentum Devlin has, but Devlin scores yet another takedown, and begins to fully control the match. Jordan hits a few forearm shots, and drills Archer in the back with his knees. Devlin goes back on the attack with a hold, grinding Archer down, and landing a vicious elbow to the bridge of the nose of Tristan. Devlin applies a headlock, until Tristan begins to fire up with forearms, and an elbow drop. Archer follows up by catching Devlin with double knees from out of nowhere, and nearly steals a victory, but Devlin won’t go away. Archer hoists Jordan into the air, as Devlin jumps off of the shoulders, and immediately hits the Devlin Side on Archer for the 1-2-3.

⁃ After the match: Devlin cuts a promo, and runs down A-Kid. The former Heritage Cup Champion makes his presence felt, and he’s on crutches. Devlin kicks the crutches away, and A-Kid tosses Devlin to the outside of the ring to end the segment.
⁃ In a promo package: Jinny and Aoife Valkyrie exchange words. They’ll be facing off in the next match.

⁃ Earlier this week: Meiko Satomura cuts a promo on the entire women’s division, in an effort to fire them up. The entire locker room begins to argue, and Satomura walks away with a smile.
⁃ Back in the studio: Aoife Valkyrie ominously struts down the aisle, and it’s time for a women’s division bout.

The bell sounds, and both women get right to work. Valkyrie and Jinny tie it up in the center of the ring, and a brief test of strength breaks out. Both women grapple around the ring to find leverage, and neither woman can gain the early advantage. Valkyrie scores a surprise roll up, followed by another pin attempt, until Joseph Connors makes his presence felt from the outside of the ring. Jinny takes advantage of the distraction, and picks up a head of steam, before Valkyrie briefly stops her. Connors gets involved once again, allowing Jinny to take full control of the match. Jinny hits a brutal snapmare takedown, causing Valkyrie to land directly on her own shoulder. Jinny continues to focus on the arms of Valkyrie, until Aoife flips through a hold, and scores a takedown. Jinny uses Valkyrie’s decision against her, and goes back to work on the injured shoulder, as well as the arms. Aoife eventually forces a break, and both lady’s stand, before exchanging straight rights and lefts. Valkyrie begins to overpower Jinny, as Connors looks concerned at ringside. Valkyrie lifts up Jinny, but Jinny hits a strike to the back of Valkyrie. Jinny follows up with a spinning heel kick, and drops Valkyrie for a cover. Aoife kicks out at two, and blocks another kick attempt. Aoife heads to the top rope, but she’s stopped by Connors, allowing Jinny to take over. Jinny nails Valkyrie with the Rolling Liger Kick, and pins Aoife for the 1-2-3.

⁃ After the match: A video package hypes Brown vs Coffey III.

⁃ Backstage: A-Kid is shown leaving the building, and he briefly tops to talk about how confident he is ahead of next week’s 30-Minute Ironman match.
⁃ In the studio: It’s time for more action from the women’s division.

The bell rings, and the lady’s start off slow. Each women shows off their athleticism, exchanging holds, and rolling through them, until Turner scores a takedown. James pops back up, and takes Turner down with a wrist lock. Stevie answers right back, and finally escapes, as the pace picks up in the match. Both women continue to show great athleticism, until Turner takes control of things in the corner. Stevie grinds the face of Aleah into the ropes, and picks up a head of steam, before delivering a draping backstabber. Stevie begins to dominate the match, until James fires up with a babyface come back. James lands dropkick after dropkick, and tries a pin, but Stevie won’t go away. James tries to keep it going, but Turner grabs a handful of hair. Stevie follows up by draping James across the ropes again, and hits Aleah with a rope assisted flat liner for the 1-2-3.

⁃ At the PC: Dave Mastiff and Jack Starz are shown training together, ahead of their tag team match next week.

⁃ In the studio: Symbiosis make their way to the ring, led by Eddie Dennis.

Before the referee calls for the bell, Symbiosis goes on the attack. Primate and T-Bone briefly stomp a mudhole in Bate and Seven, until Tyler pulls out nunchucks. The referee settles things down a bit, and Seven starts the match against T-Bone. T-Bone goes to work on Seven, until Trent hits a leg drop from out of nowhere, and tags in Bate. Tyler lands a top rope maneuver, and tries a cover, but T-Bone is still in it. Tyler drags T-Bone to the corner, where Seven tags in. T-Bone and Trent go tit for tat, until Eddie Dennis causes a distraction. T-Bone takes advantage, and tags in Primate. Primate lands a few stiff shots on Seven, and immediately tags T-Bone back in. The heels work over Seven in the corner, completely controlling the match, and keeping Seven away from Bate. Eddie Dennis looks on with a smile, as Primate continues to dominate Trent. T-Bone tags in yet again, and the double team maneuvers continue, until T-Bone makes a cover. Seven kicks out on instinct, and T-Bone tries another pin, just to force a kick out. Bate tries to fire up Seven from the corner, and Trent shows signs of fight, but he can’t quite make the corner. Bate reaches for the tag, and Dennis yanks him off of the apron. After a brief pause, Seven lands a ddt on T-Bone, allowing Bate just enough time to hop on the apron again, and make a tag. Tyler comes in with a full head of steam, and nails bop, as well as bip, staggering Primate. Bate follows up by taking both members of Symbiosis down, and comes behind that with a Tyler Driver ‘97 on Primate, but T-Bone is there to break up the pin. Symbiosis go back in control of things, as Seven and T-Bone fall to the outside. Primate hits a flying headbutt on Bate in the ring, and tries to put the match away, but Tyler is still alive. Bate and Primate battle to the apron, and Tyler nearly falls to the outside. Eddie Dennis gets involved again, and hits a crucifix powerbomb on Bate, sending him into the guardrail, and back into the ring. Symbiosis hit another double team move on Bate, and make the cover for the 1-2-NO! Seven makes it into the ring to break up the pin, and Primate tosses him right back out. Symbiosis looks to put the match away, but Tyler takes them both down. Bate runs the ropes, as Seven makes a blind tag, and Tyler leaps over the top rope to take out T-Bone, as well as Dennis. Seven hits a Seven Star Lariat on Primate, who somehow manages to kick out. Bate hurries back to the apron, where Seven makes a tag, and lifts Primate into the air. Bate comes crashing down with a knee to the temple of Primate, putting him away for the 1-2-3.

⁃ After the match: Bate and Seven stand tall in the ring. Pretty Deadly makes their way to the ramp, and mouth off towards Moustache Mountain, as the show fades to black.

Superstar of the Night: A-Kid

Match of the Night: Moustache Mountain vs Symbiosis