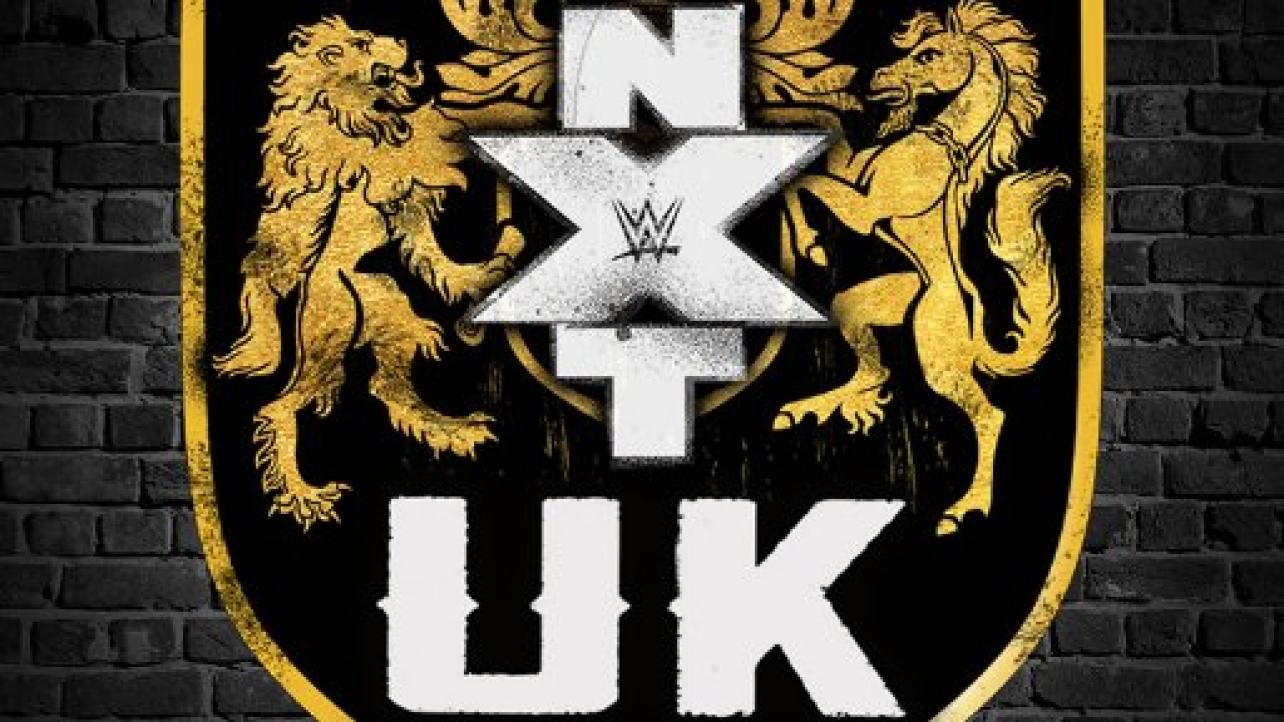 It’s that time again! NXT UK has been on fire as of late, and the brand looks to keep the good times rolling, with another episode of NXT UK. There’s no need for a long winded intro, so let’s just get straight down to business here!!

The show kicks off with the usual opening video package, and Andy Shepherd, along with Nigel McGuinness welcome the viewers to the show. Andy hypes the first ever NXT UK Mixed Tag Team match, and announces that Tyler Bate vs “Bomber” Dave Mastiff will kick off the show, in a match competed under Heritage Cup rules. After Nigel breaks down the rules, “The Big Strong Boy” Tyler Bate makes his way out to the ring.

The bell rings, and the match is under way. Both men tie it up to start the bout, and run each other into the ropes. Both men size each other up, and Bate tries a submission grab. Mastiff works his way out of it, and starts to control Bate with a wrist lock. Bate fights his way out in a unique way, and they have a standoff. A test of strength breaks out, and Mastiff powers Bate into the mat for a few quick pin attempts. Bate rolls out of the grasp of Mastiff, and Dave grabs Bate. Bate works out of the waist lock, and time runs out on the round.

The second round begins, and both men tie up. Bate quickly goes to work on the arm of Mastiff, until Dave turns it into a wrist lock of his own. Mastiff begins to ground Bate with the wrist lock, and Bate flips out of it. Bate grabs a headlock on Mastiff, and follows up with a few shoulder tackle attempts. Bate tries another, and scores a surprise roll up, claiming the first fall in the process.

The third round bell rings, and both men are starting to breathe heavily. Bate hits a stiff right jab, and follows up with a slap. Mastiff finally catches a jab attempt, and Bate goes down. Bate briefly regains control, until he tries to pick up Mastiff for an airplane spin, but he can’t lift the “Bomber”. Mastiff falls on top of Bate, and picks up the round three win.

The bell rings on round number four, and Mastiff immediately slams Bate. Mastiff tosses Bate across the ring, and he’s starting to get frustrated. Mastiff follows up with another body slam, and then another. Bate looks like he’s hurting, and Mastiff picks him up, then delivers a powerbomb. Bate rolls to the outside of the ring, and the ref begins the ten count. Mastiff goes to get Bate, and Irish whips him into the side of the ring, and the barricade repeatedly. Mastiff goes back into the ring as the referee counts again, and Bate barely makes it back in. Mastiff looks frustrated, and drives Bate into mat one more time. Mastiff goes for a cover, but time runs out on the round.

Bate is still trying to collect himself when the bell rings, and Mastiff turns up the volume with massive strikes to the back and chest. Bate tries to run the ropes and dive at Mastiff, but he gets caught. Bate fights out of the grab, and tries a suplex, but Mastiff is to big. Bate falls down, and Mastiff follows up with a massive release German suplex into the corner. Mastiff sets up for into the void, but Bate catches him with a boot to the face. Bate picks Mastiff up for an airplane spin very briefly, and heads to the top rope. Bate connects on the way down, and picks up the round five victory.

⁃ Aoife Valkyrie is shown talking to a mirror, telling herself she is her toughest opponent.

The match begins, and Teoman controls things right away. Jones kips up, and Teoman takes him right back down. Both men go into the corner, where Teoman hits a thunderous strike on Jones. Both men begin to run, until Teoman catches Jones with a drop toe hold. Teoman starts to taunt Jones, and slaps him around. Jones tries to fire up, but he gets caught with a swift strike to the stomach. Teoman hits a forearm strike on Jones, and starts to grind across his face with a boot. Teoman locks on a submission hold on the mat, and Jones forces both men to stand. Jones hits a back stabber, and tries to follow up, but gets caught with a kick. Teoman hits a missile dropkick, and lands a few kicks. Teoman jumps up and lands on the back of Jones, before locking in a cross face, and forcing Jones to tap out.

⁃ Earlier this week, Xia Brookside gives her “personal assistant” Nina Samuels a few chores to do.

⁃ Eddie Dennis “disciplines” The Hunt, and tells them about “the consequences” of losing the recent Tag Team Street Fight against Andrews and Webster.

⁃ A video package hypes Amale, who plans to add “a touch of French class” to the women’s division.

Webster and Williams start off the match with a tie up, and then another. They tie up yet again, and Morgan begins to work on the arm of Williams. Kenny kips up, and locks on a hold of his own. Webster works his way out of it, and takes down Williams. Williams quickly rebounds, and both men go into the ropes. Williams releases the hold, and they start to pick it up. Andrews makes a blind tag in, and follows up with a dropkick to Williams, who rolls to the outside. Williams gets back in the ring, and tags in Jordan. Andrews starts to go to work on the arm of Jordan, and grabs a few different variations of holds. Jordan nearly reverses the hold into a pin fall, and begins to come alive. Webster makes a blind tag, and stops the moment of Jordan. Webster isolates Jordan in the corner, and applies a pin. Jordan kicks out, and Webster tags in Andrews. Andrews hits a dropkick, and tries a pin of his own. Jordan kicks out again, and Webster tags back in. Webster hits a suplex, and follows up with a pin attempt, but Jordan once again kicks out. Jordan quickly hits a drop kick, and follows up with another strike, before trying a pin. Jordan tags out, and finally gets to his partner. Williams begins to work over the back of Webster, and lands a few vicious forearm strikes to the face. Jordan tags himself in, and hits a forearm, followed by a lateral press pin attempt. Webster kicks out at 2, and Jordan remains in control with a rear chin lock. Webster desperately leaps for a tag, and Williams tags in as well. Andrew takes down Jordan and Williams, and starts to focus on the legal man. Andrews hits a stomp to the chest, and runs Williams into the corner, before Webster and Andrews land multiple double team moves. Williams kicks out of a near fall, and Jordan tags in. Andrews continues to be on control, and lands a super kick, followed by a stunner. Andrews tags in Webster, who heads to the top rope, and hits a splash. Webster makes the pin, and Jordan stops the count. Williams tosses Andrews to the outside, and Jordan works on Webster. Williams tags in, and reverses moves with Webster, until scoring a quick roll up. Webster kicks out, and stands, but Williams meets him with a clothesline. Williams looks for a tag, but Jordan is down. Webster rolls Williams up from behind, and Williams rolls out of it. They end up in the corner with the referee, which causes a distraction, and allows a low blow from Williams to Webster. Williams follows up with a spike to Webster, and picks up the victory, while Jordan is mad about the cheap shot. Jordan and Williams argue to the back.

⁃ During a video package, the recent mental struggles Ilja Dragunov has gone through are quickly recapped.

⁃ Trent Seven talks about his training, as he tries to get down to 205 or less.

⁃ It’s announced that Devlin and Seven will have a “weigh in” on The Bump.

⁃ Ben Carter says “with a new brand comes a new name”, and announces he is now Nathan Frazer.

Joseph Connors and Jinny vs Piper Niven and Jack Starz

Jinny and Niven start the match, but Jinny tags in Connors. Starz steps into the ring as well, and Connors goes to work on him. Both men tie up, and Connors grounds Starz. Starz flips out, and Connors talks trash. They tie up again, and Connors applies a headlock. Starz reverses, and starts to work on the arm of Connors. Starz scores a crucifix roll up, but Connors kicks out. Starz locks on a short arm scissors hold, and Connors eventually hoists Starz into the air. Starz drops down, and follows up with a dropkick. Starz tags in Niven, and Jinny cautiously enters the ring. Niven tries to talk trash to Connors, allowing Jinny to hit her from behind. Jinny tries to follow up, but Niven is to powerful. Jinny takes a moment, and tags in Connors. Starz quickly enters the rings, and fires up on Connors. Connors halts the momentum, and Jinny aides Connors from the outside. Connors starts to completely control Starz, and tries a pin. Starz kicks out at 2, and Connors starts more trash talking. Connors slams Starz into the mat, and he defiantly kicks out. Connors gets even more aggressive, and trash talks Niven. This allows Starz to collect himself, and he begins to run the ropes. Starz misses a cross body attempt, and rolls to the floor. Jinny tries to go after Starz, but Niven stops her. Starz goes back into the ring, and Connors goes back on the attack. Starz starts hitting thunderous European uppercuts, and eventually takes Connors off of his feet. Starz tags in Niven, and Jinny runs away. They both return to the ring, and Niven starts to rag doll Jinny, until trying a cover. Jinny kicks out, and Boven remains on the attack. They go into the corner briefly, until Jinny chops Niven down at the knees, and she falls onto the ropes. Jinny tries to follow up, but she misses, and Connors tags in. Connors talks more trash to Niven, allowing Starz to come from behind, and hit a suplex. Niven decides to hit a suplex on Connors too, and follows up by dropping Starz on top of Connors. Starz lands perfectly in a pinking position, and he puts away Connors for the 1-2-3.

After the match, Nigel complains about Niven “breaking the rules”, as the show fades to black.

It’s now time for some awards:

Superstar of the Night: Tyler Bate

Match of the Night: Williams/Jordan vs Andrews Webster

That’s all for this weeks edition of the NXT UK Recap. Thanks for stopping by everyone, and have a great day!