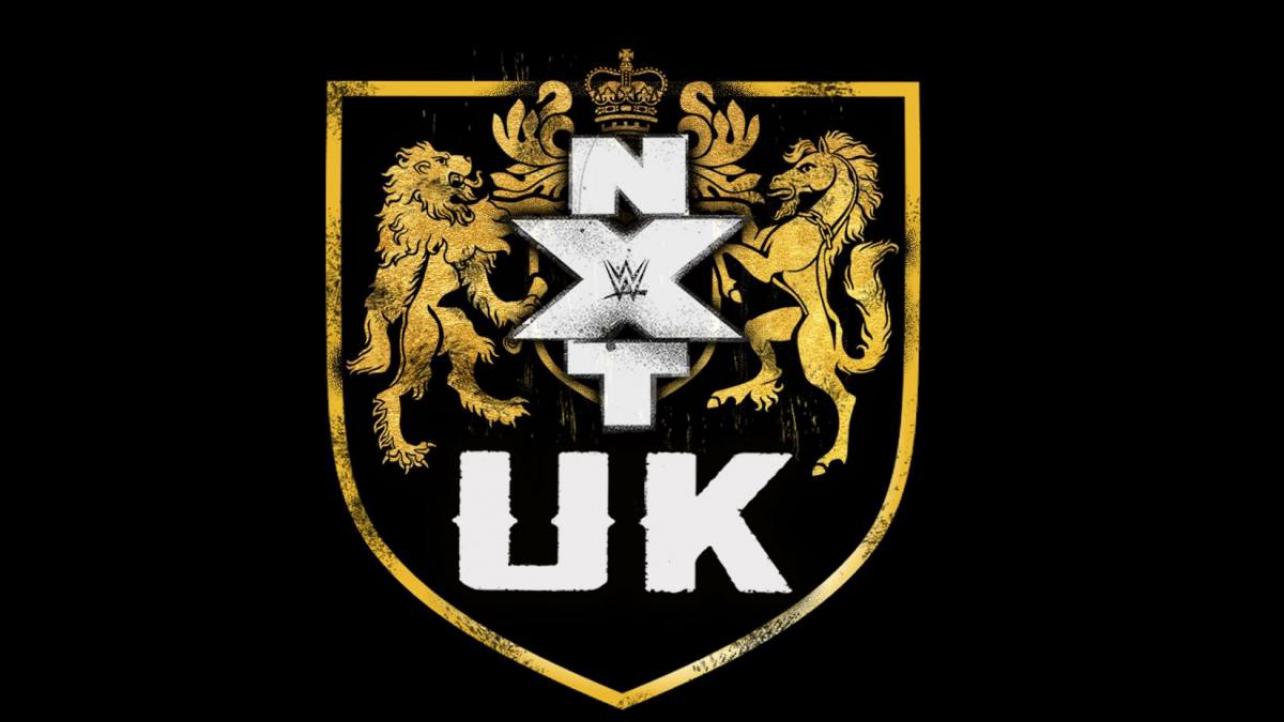 Hello again wrestling fans, and welcome back to the NXT UK recap! A video package hyping the NXT UK Women’s Championship match between Kay Lee Ray and Meiko Satomura kicks off the show, and Nigel, along with Andy, welcome the viewers to the B.T. Sports studio. Once the introductions come and go, Ilja Dragunov makes his way to the ring, and he’s in the first match.

The bell rings, and Gradwell slaps Dragunov. They go all around the ring trying to gain leverage on the other man, until Dragunov slams Gradwell. Dragunov goes into a head and arm clutch, before hesitating to punch a grounded Gradwell. The hesitation allows Gradwell to capitalize briefly, and they try to find leverage again. Dragunov starts to mount some quick offense, before landing a thunderous knee strike to the face of Gradwell. Dragunov follows up with a boot to the face, and before leaping off of the top rope onto Sam. Dragunov goes back to the top rope, but Gradwell stops him. They fight on the rope, until Dragunov knocks Gradwell to the mat, so Sam knocks him to the floor. Ilja comes back into the ring, and Gradwell starts to get going. Gradwell remains in control, until Dragunov tries to stop him, and they go into the ropes. The referee forces a break, so Gradwell slaps Dragunov again, and applies a pin. Gradwell begins to work over the head and neck of Ilja with a submission hold, and switches to a standing arm bar. Dragunov delivers a head butt to Gradwell, and he’s starting to get upset. Dragunov tries to calm himself down, and goes back on the attack. Dragunov lands vicious knife edge chops to the back of Gradwell, and follows up with a suplex. Ilja nails another suplex, and attempts a third, but Gradwell fights out. Gradwell hits a desperation elbow to the face, and both go down. Dragunov gets up first, and heads to the top rope, before hitting a banzai drop. Ilja tries to follow up in the corner, but misses, and hits the exposed turnbuckle. Gradwell tries to put the match away, but Dragunov unleashes a fury of elbows on him, and the referee calls for the bell.

After the match, Dragunov continues to have a melt down. Gradwell lays on the mat beaten, but smiling, before telling Dragunov “well done”. After Kay Lee Ray is shown warming up, the how heads to an ad break, and a video package hypes the arrival of Teoman.

Back from the break, Xia Brookside is shown getting some help from her “personal assistant” Nina Samuels. Once the brief segment wraps up, Noam Dar makes his way out to the stage.

Dar welcomes us to the show, and shares a few nice words the WWE Universe has shared about him. The comments quickly turn mean, so Dar brings on Tyler Bate. Dar asks if Bate thinks he needs a haircut, and Bate tells him “you look great”. Dar wants to know who Zen is, and Bate explains to him that Zen isn’t actually a person. Dar thinks he gets it, and says “zen means not reacting to those who push your buttons, right”? Dar covers the accolades Bate has had so far, and sweeps them under the rug. Noam wonders if Bate is a vegan, and offers him a few snacks. Dar drops the snacks on the floor, and hands them to him anyways. Noam grabs a “garnish”, and dumps it in the lap of Bate. Dar wonders if Tyler is “feeling Zen yet”, and says “Zen didn’t help you there did it”. Bate responds, and says “we only lose what we cling to”. Noam has no idea what that even means, so Bate explains. Bate talks about his most recent successes, and talks about his match next week, which will be competed under heritage cup rules, against Dave Mastiff. Bate stands up, and says “where fear ends, life begins”, then pushes Dar. Bate finishes by saying “I am Tyler Bate”, and the “funky music” plays him off.

The show then moves to a segment filmed earlier this week, where Ben Carter is working out at the UK Performance Center. Carter stops for an interview, and talks about adapting to the “UK Style”. After the interview, a video package hypes Aleah James, and she tells viewers “wrestling is all I’ve wanted to do. I can bring a different edge to the women’s division”. The show then heads to another ad break.

When NXT UK returns from the break, Isla Dawn is shown messing around with a crystal ball, and a ouija board. That’s pretty spooky! After Isla stops playing with spirits, Meiko Satomura is shown warming up. The show then returns to the ring for a tag team match.

Williams starts of the match against Jordan, and both men tie it up. Williams rolls out of it, and they begin to exchange moves, along with a few pin attempts. They both throw a few strikes, and miss, before tying up again. Jordan tags out, and Smith comes in on fire. Smith steam rolls Williams, and taunts Jordan. Smith throws Williams with a judo hip toss, and Jordan tags in. Amir goes to work on Smith with a submission hold, and switches to another submission. Both men get back up and run the ropes, until Jordan lands a crossbody on Smith. Jordan applies another submission hold, and Smith powers him into the corner. Carter tags back in, and lands a few big strokes to Jordan, before making another tag. The heels use an innovative double team move on Jordan, and Smith tries a pin. Carter quickly tags in again,and the heels continue to work over Jordan. Carter tries a few pins, but Amir stays in the match. Amir continues to show resiliency by kicking out of yet another pin attempt, and Smith comes back into the ring. Smith begins to dominate Jordan, until getting caught with a roll up attempt. Jordan tags in Williams, and he comes into the match on fire. Williams takes down Smith and Carter, and scores a surprise pin attempt on Smith. Smith kicks out and goes to the apron, and he’s joined by Carter. Williams runs the ropes, while Jordan joins him, and they both dive onto the heels. The match returns to the ring, and Williams along with Jordan try to seal the deal on a victory. Both teams exchange offense, and start to counter pin attempts, until Jordan hooks the leg of Carter for the win, after assistance from Williams.

After the match, Williams and Jordan celebrate their win. Nigel hypes next weeks mixed tag team match between Piper Niven and Jack Starz, who face off against Jinny, and Joseph Connors. After the video package, the show takes a pause for an ad break.

Jordan and Williams are shown talking about their victory on the other side of the break, and announce that next week they’ll be taking on Flash Morgan Webster and Mark Andrews. Nigel also tells the viewers about the Tyler Bate and Dave Mastiff match, and they will go to battle next week. The show then returns to the ring.

Both women quickly tie up to start the match, and go onto the ropes. The ref breaks the hold, and a test of strength breaks out briefly. Satomura takes Ray down, and Ray works her way back up. They run each other into the corner of the ring, and Ray locks on a submission hold. Satomura powers out of the hold, and Ray goes to the outside. Ray takes a moment to collect herself, and gets back in the ring. Satomura begins to land rapid strikes on Ray, and tries a pin. Ray kicks out of it, and begins to fire up with chops. Ray tries a pin, and Satomura kicks out at one, but Ray remains on the attack. Ray continues to chop Satomura, until Meiko hits a European uppercut. Ray goes down to the mat, and Satomura locks on a submission hold. Ray grabs the ropes, and forces a break, so Satomura lands a few kicks. Satomura continues to kick Ray, until KLR finally stops her. Ray locks in a submission hold of her own, but her shoulders are down on the mat, and she has to kick out, which breaks the hold. Ray goes back on the attack quickly, and chops Satomura in the throat. Satomura begins to “hulk up”, and catches Ray with a roundhouse kick. Ray falls into the corner, and Meiko lands a few kicks. Satomura tries another, but she misses, and Ray escapes from the corner. Both women go to the outside, after Ray drives Satomura face first into the mat, as she hung on the apron. Ray goes back into the ring to break the count, and sets up for a gory bomb on the apron. Satomura stops her, and hits a Death Valley bomb on the apron on Ray. Ray falls to the outside, and referee starts the count. Ray gets back into the ring at the count of 9, and Satomura starts to pick at the pieces that are left of Ray. Satomura tries a suplex, but Ray blocks it. Satomura tries again, and nails the suplex, before following up with a pin attempt. The resilient champion kicks out, and Satomura tries another suplex. Ray fights out, and hits a DDT, before following up with a nasty submission hold. Satomura nearly reverses, and scores a brief pin attempt, but Ray kicks out, and keeps the pressure on. Satomura finds her way to the ropes, and the referee breaks the hold, so Ray heads to the top rope. Satomura catches her, and takes the feet of Ray out from under her. Ray hangs on the ring post, and Satomura picks her up to deliver another Death Valley bomb. Satomura lands the move, and makes the cover, before pinning Ray for the 1-2-NO!! Both ladies go to the top rope after that, until Satomura knocks her to the mat. Meiko leaps off the rope for a frog splash, but Ray gets her knees up. Ray then nails a super kick, and follows up with a gory bomb, and the ref counts the 1-2-NO! NO!! Satomura stays in the match, and the frustrated champion heads to the top rope again. Ray tries a senton, and misses. Satomura tries to set up for her finisher, but Ray blocks, and tries another gory bomb. Satomura reverses, and nearly pins Ray. Ray kicks out of it, and sets up for the gory bomb yet again, before putting away Satomura for the 1-2-3. My gosh what a match!!

After the match comes to a close, the announce team recaps the match, as Ray stands tall in the ring. Ray helps Satomura up, and they share a nice moment, as the show fades to black.

Now it’s time to hand out a few awards:

Superstar of the Night– ilja Dragunov

Match of the Night– Meiko Satomura vs Kay Lee Ray

That’s all for this weeks recap! I’m going to catch my breath now. Enjoy your day everyone, and be sure to join me right here on ewrestling.com next week, for an all new episode of NXT UK.