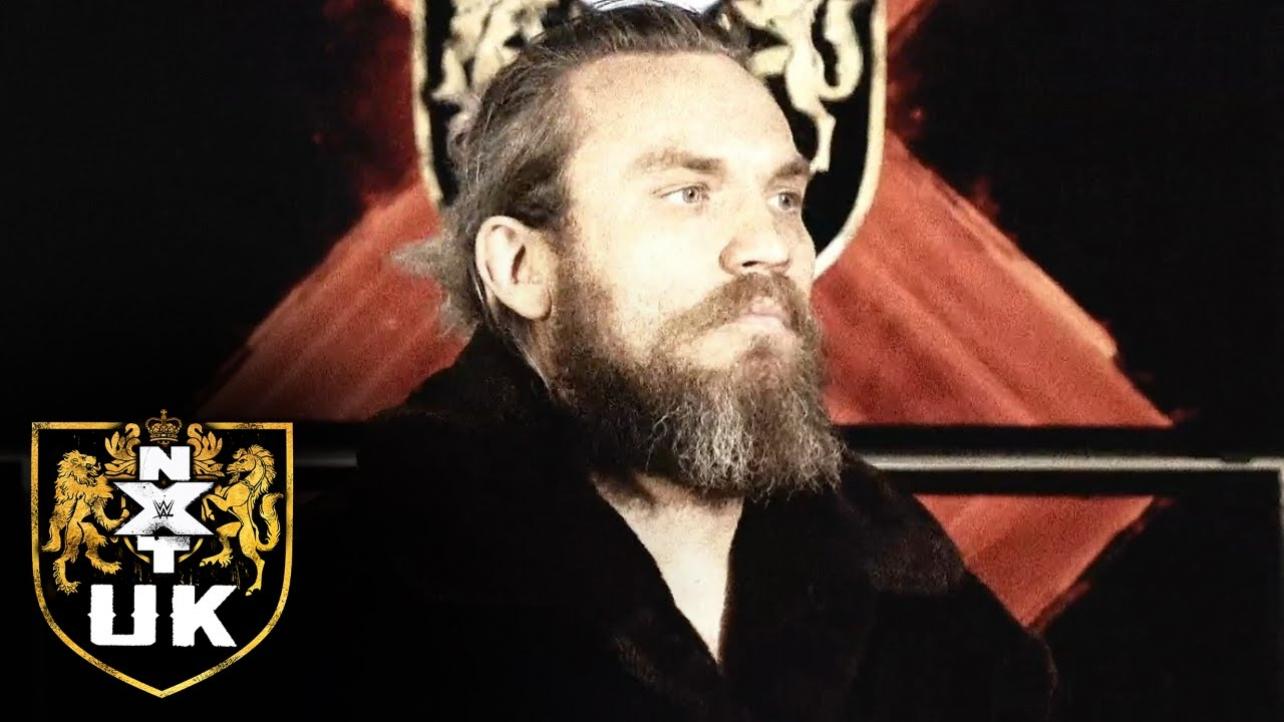 Hello again wrestling fans, and welcome back to the NXT UK Recap. Tonight’s show is centered around a battle of former teammates, as Amir Jordan takes on Kenny Williams in a Loser Leaves Town match! Let’s get down to it!

⁃ The show kicks off with the usual intro, and Andy Shepherd, along with Nigel McGuiness welcome the viewers to the B.T. Sports Studios.
⁃ Andy hypes the main event, until Ilja Dragunov makes his way down the ramp, and he’s in the first contest of the night.

The opening bell rings, and Dragunov starts off fast with rapid strikes. Mastiff lands one big strike, and rocks Dragunov, allowing them to trade shots. After an exchange of strikes and holds, Dragunov briefly staggers Mastiff with a huge elbow shot, and tries a suplex. Mastiff backs Ilja into the corner, but Dragunov jumps on his back. Mastiff hits a thunderous back body drop on Ilja, and the ref suddenly calls for the bell… It looks like the elbow to the face may have legit broken the nose of Mastiff.

⁃ A video package airs, and viewers hear from each of the competitors in the upcoming Gauntlet Match, which will determine the number one contender to the NXT UK Women’s Championship.
⁃ Earlier today: Sid Scala speaks to Kenny Williams, emphasizing that the result of tonight’s match will definitely be enforced.
⁃ A vignette hypes the arrival of Stevie Turner.
⁃ Moments ago: After a break, Dragunov says “my lack of self control has consequences…”
⁃ Earlier this week: Gallus is at the PC, where they a run in with Rampage Brown, setting up a future match.

Noam is accompanied by Sha Samuels, and Dar talks about people who think he is “underrated”. Noam says he doesn’t need the WWE Universe, and “never come at me with that nonsense again.” Noam and Sha welcome Nathan Frazer on set, but some other guy walks out… Noam questions “Nathan” about his name changing from Ben Carter, which happened “because I didn’t want my parents to know I’m a wrestler.” Noam mockingly asks what “Nathan” has learned so far, and “Nathan” talks about training, adding “I’m becoming a much more complete performer.” Noam tries to play “Nathan” off, but Sha Samuels explains “what gets on my nerves.” Sha says the fact is “you’re not a true British wrestler.” Samuels adds “you would drown in the ring with a real British wrestler, because your a fraud.” Noam tells “Nathan” that “we are British wrestling, and I challenge you to a match under Heritage Cup rules.” “Nathan” stands up, and says “wouldn’t it really be something if I beat you?” After a quick pause, Noam “plays that funky music”, and the segment comes to a close.

⁃ Earlier today: Sid Scala reminds Amir Jordan that “whoever loses tonight will never be in NXT UK again”.
⁃ A vignette airs for a new faction, which is named The Subculture.
⁃ After an ad break: Tyler Bate and A-Kid watch each of their past battles, and talk about how they both felt at the time of each match.

The bell rings, and both men look to gain the advantage with a tie up. Huxley forces Seven into the corner, and they release each other. Huxley begins to land tough shots to the ribs of Seven, and runs him all around the ring, before driving the air out of the lungs of Seven with a thunderous shot. Seven tries to come back with a cross body, but gets caught, before working out of it. Seven finally grounds Huxley, and tries a pin, but Saxon kicks out. Both men begin to run the ropes, until Huxley hits a knee to the face, followed by a Thesz Press. Huxley lands an elbow, and tries a cover, but Seven is still in it! Huxley remains on top of things, and hits a big splash in the corner, before heading to the outside of the ring. Huxley hits a drive-by boot, and Seven falls to the floor. Huxley then slams Seven hard into the floor, and he tries to get a count out victory. Seven begins to move, so Huxley changes course, and heads to the apron, before attempting an elbow drop. Huxley misses the big attempt, and both men are down, until Huxley rolls Seven into the ring. Seven begins firing up with chops, but Huxley strikes him in the throat. Huxley misses a strike, allowing Seven to hit a DDT. While both men are down, Sam Gradwell appears on the screen, and he tells Seven “you can’t get the job done.” Huxley capitalizes by planting Seven in the middle of the ring, and he tries a cover, which results in a very close near fall. Huxley tries to follow up, but misses the attempt, allowing Seven to nail the Seven Star Lariat for the 1-2-3.

⁃ After the match, an ad hypes “Throwback Smackdown”.
⁃ Moments ago: Amale is shown attacking Xia Brookside, and it’s not clear why. Luckily for Xia, 30 referee’s were around.
⁃ Andy reminds everyone about next week’s Gauntlet Match.
⁃ Nigel announces Noam Dar will take on Nathan Frazer, which will also go down next week.

The bell rings, and both men tie up, then grapple into the corner. The referee makes them bring it back to the center of the ring, and they begin exchanging blows, until Amir gets a surprise roll up. They go back to exchanging blows, until Amir whips Williams hard into the corner, twice. Jordan tries a pin, but Williams quickly kicks out. Kenny lands a kick on the previously inured shoulder of Amir, and he’s really going to work on the limb. Williams begins to gain full control of the match, and he hits a few stiff forearm shots to the face of Jordan. Amir falls to the outside of the ring, and Williams remains on the attack, as Jordan screams in pain. Williams cracks Jordan with a steel chair, and follows up by grabbing a tool box. They both go back into the ring, and Williams continues to land hard blows to Amir’s body. Kenny plants Amir in the tree-of-woe, and asks “how’s it hanging”, before getting serious. Williams grabs a foreign object, and tries to jam it in the face of Amir, but Jordan fights out. Williams goes to the floor, and Jordan follows with a torpe suicida through the ropes. Williams quickly rebounds, and begins tearing up the padding at ringside. Kenny grabs Jordan, and brings him to the exposed concrete, but Amir stops him. Kenny then slams Amir into the barricade, and tries to follow up with a splash, but Jordan tosses him into the area where seats would be. Both men fight all around the studio, and Jordan is in control. Jordan runs over Williams with some of the backstage equipment, as welts begin to form on Kenny. After a brief pause, Williams finds a a fire extinguisher, and blast’s Jordan in the face with it. Kenny follows up by scooping Jordan up, and slamming him through a table, causing both men to go down. Williams drags Amir back to the ringside area, and both go back into the ring. Kenny lands a stiff shot, and tries a cover, but Amir will not stay down. Kenny exposes the turnbuckle, allowing Jordan to score a surprise roll up, but Williams kicks out, forcing Amir to run into the exposed steel. Kenny follows up by planting Jordan, and tries a cover, but Amir is still in it! Kenny goes back to the toolbox briefly, but he rethinks it. Both men wind up on the apron, near the exposed concrete, and Williams tries a suplex. Amir hangs on to the ropes, causing separation briefly, but Williams scoops him up for a powerbomb attempt on the floor. Amir jumps off of the shoulders of Williams, and grabs Kenny for a suplex onto the exposed concrete. Both men land with an awful smack, and scream in agony, as the referee checks on each guy. Jordan gets up first, and rolls Kenny into the ring, before heading to the top rope. Jordan nails a senton, and makes the cover for the extremely close near fall. Jordan grabs a chair, and sets it up in the center of the ring, before repeatedly ramming the face of Williams into it. Jordan leaves Williams draping over the chair, before going back up top, but Williams throws the chair in his face. Jordan catches the chair, and throws it back at Williams, causing him to fall into the ropes. The fall makes Jordan rack himself on the previously exposed turnbuckle, and Kenny follows up by spiking Amir face first into the chair. Williams applies a cover, and the referee counts the 1-2-3.

⁃ After the match, Nigel and Andy recap the main event, as Williams looks remorseless.
⁃ Jordan begins to cry once reality sets in, and the show fades to black.

Superstar of the Night: Kenny Williams

Match of the Night: Kenny Williams vs Amir Jordan

That’s all for this weeks edition of NXT UK! Thanks for stopping by, and have a great day!