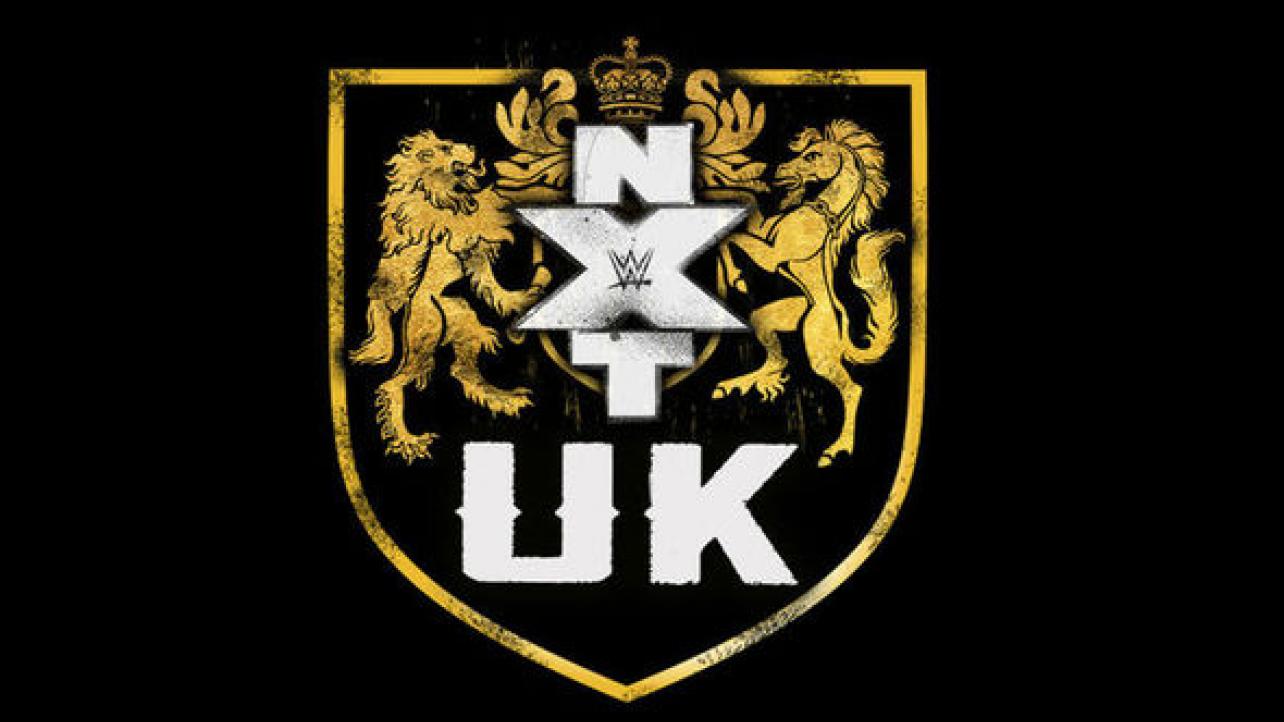 Hello again wrestling fans, and welcome back to the NXT UK Recap. This edition of the show is all about a huge mixed tag team match. Let’s get down to it!

⁃ The show kicks off with footage of last weeks closing moments of NXT UK, where Meiko Satomura became the new NXT UK Women’s Champion.
⁃ After the usual opening video package, Wolfgang makes his way to the ring.

Gradwell cuts a promo on his way to the ring, and the bell sounds, as the bout begins. Both men tie up fast, and Gradwell sends Wolfgang into the ropes. Wolfgang rebounds with a shoulder block tackle, but Sam hops back up, and there’s a brief stand off. Gradwell locks on a headlock, and grounds Wolfgang, until the big man breaks free with a hip toss. Wolfgang applies a hold of his own, and he’s met by a forearm from Gradwell. Wolfgang doesn’t release the hold, and drags Sam into the corner. Wolfgang whips Sam into the opposite corner, and follows up with a splash. Wolfgang heads to the top rope, and Gradwell pushes him off, causing Wolfgang to fall to the floor. Sam stays on the attack, and rolls Wolfgang back into the ring, where Gradwell stays in control of things. Sam applies another submission hold, and wrench’s the neck of a grounded Wolfgang. The veteran Wolfgang begins to use his size, and breaks free, before nailing a double axe handle to the face of Gradwell. Wolfgang follows up by using innovative offense, and tries a cover, but Sam is still in. Gradwell begins to come back alive, and he fires up with a few strikes, followed by knees to the face of Wolfgang. Both competitors go down, and Gradwell makes it back up first. Sam goes on the attack, but Wolfgang stops him, and heads to the outside. The veteran fools Gradwell, and hangs Sam up on the ropes as he tries to follow Wolfgang, who flips back into the ring from the apron. Wolfgang nails a spear as soon as he lands, and puts Gradwell away for the 1-2-3.

⁃ After the match: Kenny Williams cuts a promo. He’s up next.

⁃ A video package is aired, and most of the NXT UK roster congratulates Satomura on last weeks win.
⁃ Backstage: Jinny and Joseph Connors berate Subculture. Pretty Deadly interrupts, and they’ll be on commentary for the main event.

The bell sounds, and both men start off fast. Kenny immediately goes for a headlock, but Jones picks him up for a slam. Danny goes for a cover, and Williams kicks out at one. Kenny regroups, and nails a stiff shot, followed by a cover attempt. Jones is unphased, and he tosses Williams into the ropes, who rolls to the outside. Jones goes on the chase, but Williams tricks him, allowing Kenny to come back into the ring. Williams hits numerous strikes, and tries a cover, but Jones is still going. Danny tries to make it to the ropes to stop the offense, but Kenny strikes him anyways, while the referee counts to five. Kenny is finally forced to release Jones, and applies a headlock to Danny, who is grounded. Williams shifts gears, and works over the arms, as well as the neck of Jones, until Danny finally breaks free. Jones manhandles Williams into the corner, and tosses him from post to post, before falling into a cover. Kenny kicks out at a close two, and Danny sends Williams into the ropes. Kenny rebounds with a dive at Jones knee, and Danny goes down in pain. Kenny lifts Jones from the mat, and slams him back into it with the reverse ddt for a win.

• Back from the break: Mark Coffey is at the PC. Sha Samuels is there too, and they’ll have a match soon.

Noam Dar makes his way out to the set, and he says “let me announce the official drop of the new supernova 11 t-shirt… 5 years in the making. I deserve it!” Noam moves on, and introduces “The Irish Ace” Jordan Devlin. Both guys hug, and Dar tells Devlin “you look great man. You look like a star.” Dar and Devlin talk about designer clothes for a bit, and Noam gifts Jordan the new supernova t-shirt. Dar asks Devlin how he’s been, and Jordan says that he’s ok, but he’s upset he lost “our brands Cruiserweight Championship”. Devlin adds “we have both been to the land of opportunity, ‘The Sunshine State,’ and we’re both right back here in the UK. You know why? Because America sucks!” Dar agrees, and begins to talk about “our Cruiserweight Championship.” Noam says “I’m feeling generous today, and I like to pay things forward… I’ll give you the gift of time.” Devlin takes the floor, and says “this is an exclusive for the entire NXT UK roster… the franchise player on this brand is back. If you wanna fight, look for the door with the big golden star on it.” Noam plugs his new t-shirt one more time, and tells his sound guy to “play that funky music,” as the announce team moves on.

⁃ After the segment: Oliver Carter vs Teoman is announced for next week.

• On the other side of the break, Tyler Bate offers Jack Starz a Championship opportunity, but Jack graciously declines.

This is Rohan’s first appearance in two months. The opening bell sounds, and Frazer quickly rolls up Raja. Rohan comes behind that with a roll up of his own, and there’s a brief standoff. Both men get back to bouncing all around the ring, until Frazer lands a takedown on Raja. Frazer tries a springboard maneuver after that, and misses, allowing Rohan to capitalize. Rohan begins to stomp a mud hole in Frazer in the corner, and whips him into the other corner, before trying a pin. Nathan kicks out at two, and Rohan stays on top of things. Frazer eventually fights out, and uses innovative offense for a cover attempt, but Raja shakes it off. Raja tries to stay in control, but he gets caught with a thunderous elbow shot. Rohan backs off, while Nathan collects himself, but Raja gets going first. Frazer fights him off, and runs the ropes quickly, rebounding with a cross body. Both men go down for a moment, until Frazer heads to the top rope. Nathan goes for a moonsault, and lands on his feet, before immediately landing a standing moonsault. Frazer tries a cover, but Rohan is still fighting, and locks on a surprise submission hold. Raja releases the hold, and forces Frazer to run the ropes, then catches him with a pop up powenomb. Frazer kicks out at a close two, and both guys are down again. Frazer and Raja fight back up, where Nathan begins to take control. Frazer lands a kick to the head, dropping Raja near the corner. Frazer heads up top, but Raja knocks him off. Nathan hits a quick strike from the apron, and goes back up top. Rohan meets Frazer there again, and Nathan pushes him off, then follows up with a frog splash for the 1-2-3.

• Backstage: Jordan Devlin finds someone in his personal locker room, and he’s upset about it.

• Back from the last break, Nigel reminds viewers about next week’s huge triple threat main event.

The opening bell rings, and the main event is underway. Connors starts off the match with Webster, and both wrestle straight into the corner. After the referee forces a release, Webster takes Connors down with an arm drag, and another one. Joseph quickly rebounds, but he’s then caught with a roll up. Webster changes gears, and tags in Luna, as Jinny makes her way into the ring. Dani grabs a waist-lock, and tries a suplex, but Jinny grabs the hair of Luna. Jinny tries to mount some offense, but Dani won’t release the hold. Jinny finally escapes, and goes to the outside to talk to Connors. Jinny makes her way back into the ring, and she’s on fire. Jinny pounds away on Luna, and tries a quick cover, but Dani is still in the match. “The Fashionista” remains in complete control of things, and applies a nasty submission hold, as Dani screams. Luna tries to use her strength, and powers out of the hold briefly, but Jinny changes her grip. Jinny and Luna fight to the outside of the ring, allowing Webster and Connors to step into the ring. Webster runs and flips all around the ring, and springs off of the top rope for a crossbody takedown. Webster follows up by sending Connors to the outside, and follows him with a dive. Luna and Jinny take the fight into their own hands again, and Dani is in full control of the match. Connors jumps into the ring, and Webster follows him. Flash Morgan runs into a strike from Jinny, while the referee deals with Connors, and Jinny also strikes Luna. Jinny almost steals the match, but things are still happening. The match completely breaks down as the end draws near, and quick tags are made, as everyone is in the ring. Flash Morgan Webster eventually makes his way to the top rope, and hits a 630 splash on Connors for the win.

• Pretty Deadly look on from the commentary desk, as Subculture stands tall in the ring, and the show fades out.

Superstar of the Night:Jordan Devlin

Match of the Night: Sam Gradwell vs Wolfgang