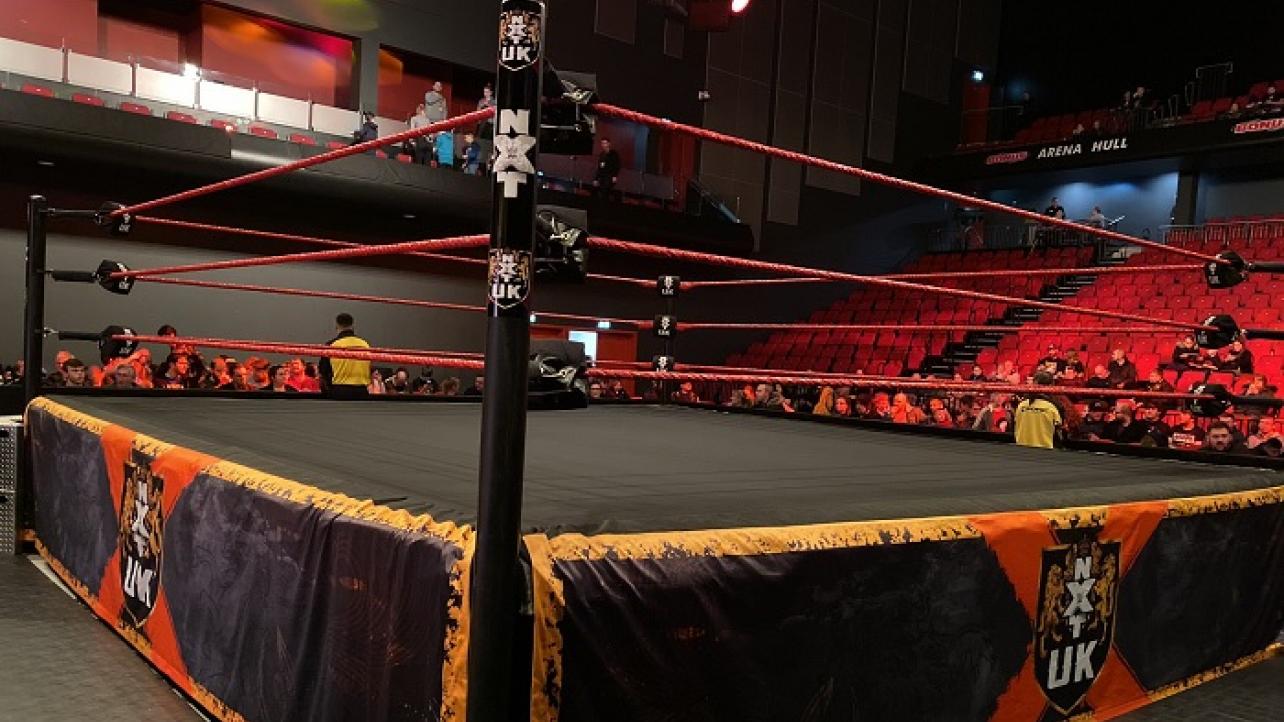 WWE kicked off two consecutive days of NXT UK television tapings from the Bonus Arena in Hull, England on Friday night for future episodes airing on the WWE Network as the build-up to the NXT UK TakeOver: Blackpool II live special on January 12, 2020.

Featured below are complete results of the first night of NXT UK tapings. The report was written by Dei Owen (@deiowen) and F4WOnline.com.

Make sure to check back here at eWrestling.com later today or tomorrow for a complete recap of the second day of NXT UK TV tapings from Hull, England.

NXT UK kicked off two straight nights of television tapings at the Bonus Arena in Hull today. Here are the results from night one:

– The show began with Andy Shepherd announcing NXT UK TakeOver: Blackpool II for 2020. The exact date of the event was not mentioned. This will be the second NXT UK TakeOver to emanate from the Empress Ballroom in Blackpool.

Andrews rolled Ohno up for the win. The crowd was energetic from the start.

Seven hit Reeves with the Birminghammer for the victory. After the match, the returning Eddie Dennis grabbed Seven’s hand and stared him down.

This was a very good technical showcase for both men.

– The Grizzled Young Veterans (Zack Gibson & James Drake) cut an in-ring promo and demanded an NXT UK Tag Team title rematch from general manager Johnny Saint. They stated that if if hadn’t been for the stipulation at TakeOver: Cardiff, they would still be the champions.

Despite his very aggressive nature, hometown favorite Holland had most of the crowd on his side. Ashton Smith helped Carter get back up after the match.

Wolfe’s victory came as a result of Imperium’s interference. After the match, Imperium beat down Dragunov before Gallus made the save. As the brawl came to an end, WALTER and Joe Coffey had a small tug-of-war with the WWE United Kingdom Championship.

Niven cut a promo after saying that she is coming for Kay Lee Ray’s NXT UK Women’s Championship. She was then blindsided by the champion, but Toni Storm returned to make the save. Niven and Storm stared each other down afterwards.

The returning Dennis got the win with the Next Stop Driver. Dreiss was very impressive and had a lot of fan support.

Dar got the pinfall victory with a Nova Roller.

Storm made quick work of Kelly and put her away with the Storm Zero. Kelly is still yet to have a televised victory in NXT UK.

Kay Lee Ray attacked Storm following the match, then Piper Niven ran out to save her. Niven offered Storm a handshake, but she just walked away.

Tyler Bate came out to watch the match at ringside. Devlin got the win with the Devlin Side suplex, with that putting an end to a hugely impressive match from both men.

Conners pinned Banks with the Don’t Look Down cradle DDT. After being attacked by Conners on last week’s TV, Ligero and Banks teamed together during the early stages here. Conners got busted open on the bridge of his nose near the end.

WALTER cut a promo after the match stating that no one on the NXT UK roster is able to beat him, then Tyler Bate ran out and hit him with a lariat and the Tyler Driver 97. The show finished with Bate standing tall.