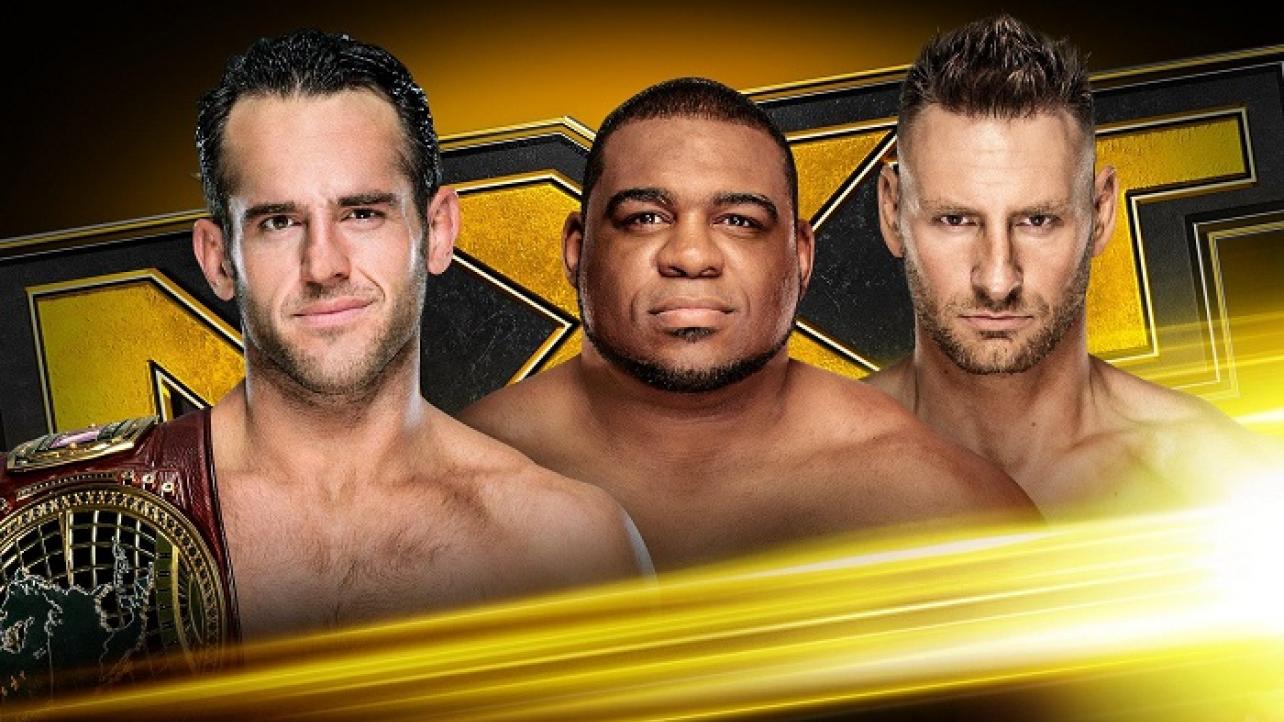 The Wednesday Night Wars return this evening, as WWE presents this week’s episode of NXT On USA from Full Sail University in Winter Park, Florida.

After The Undisputed ERA took out The Velveteen Dream and NXT General Manager William Regal made Keith Lee and Dominik Dijakovic’s rubber match a battle to determine NXT North American Champion Roderick Strong’s next challenger, Strong attempted to take matters into his own hands. The champion interfered in the battle, attacking both Superstars to ensure there would be no victor. Regal, however, was ready to make sure Strong’s title would be on the line. Therefore, Strong will defend the NXT North American Title against both Lee and Dijakovic this week on NXT. Can he fend off both titanic challengers? Find out tonight, live at 8/7 C on USA Network!

Roderick Strong attempted to ensure he would not have to face Keith Lee or Dominik Dijakovic tonight on NXT, interfering in the rubber match between the two titans. However, his meddling has seemingly backfired, as Strong will be forced to defend his NXT North American Championship against both men in a Triple Threat Match.

Originally, The Velveteen Dream was scheduled to get a championship rematch against Strong. However, Strong and his Undisputed ERA cohorts brutally attacked His Purple Highness before the Oct. 16 edition of NXT, where they unveiled their heinous actions.

NXT General Manager William Regal revealed that Dream would not be able to compete next week or for quite some time. Instead, Strong’s next challenger would be the winner of the rubber match between Lee and Dijakovic. During an epic battle between the two monsters, the NXT North American Champion attacked both Superstars, but Regal would not stand for Strong’s insolence, making this huge Triple Threat Match.

Can Strong survive a battle with two of NXT’s biggest competitors, or will a new NXT North American Champion be crowned?

As the race to become the next challenger to NXT Women’s Champion Shayna Baszler heats up, Bianca Belair and Rhea Ripley will battle for the first time tonight, with both women looking to move up the ladder.

Last week on NXT, the two women threw their hats in the ring for a future title opportunity, with Belair taking offense at Rhea’s claim to a title opportunity, and Ripley is ready to demolish anyone standing between her and Baszler.

Who will move one step closer to an NXT Women’s Title opportunity?

How is Finn Bálor’s past his future?

Since his surprise return to NXT, Finn Bálor has been a man of few words. And when he has spoken, The Extraordinary Man has left the NXT Universe asking more questions — like he did last Wednesday, when he said, “Next week, my future will be my past.”

Just what did Finn Bálor mean by that?

Can Pete Dunne deal with both Damian Priest and Killian Dain?

Last week on NXT, Pete Dunne was out for payback on Damian Priest, but found himself on the losing end of the battle after The Archer of Infamy hit The BruiserWeight with a low blow. After the match, Dunne made it clear that Priest has his attention.

However, Priest is not the only Superstar Dunne has to worry about. Before his main-event showdown with Priest, Dunne locked eyes with Killian Dain, who had just demolished Boa. After some jaw jacking between the two, Dain seemingly made the error of pointing a finger at Dunne, as The BruiserWeight snapped his digits in a split second. The Beast of Belfast had to be restrained from going after Dunne during the ensuing commercial break.

How will Pete Dunne handle his search for retribution on Priest, along with his newfound enmity with Dain? Find out on WWE NXT, live this Wednesday at 8/7 C on USA Network!

And #WWE stacks the deck for this week’s #WednesdayNightWars with #WWENXT vs. #AEW‘s #AEWDynamite TONIGHT with #NXTonUSA~!

FULL breakdown of what to expect~!