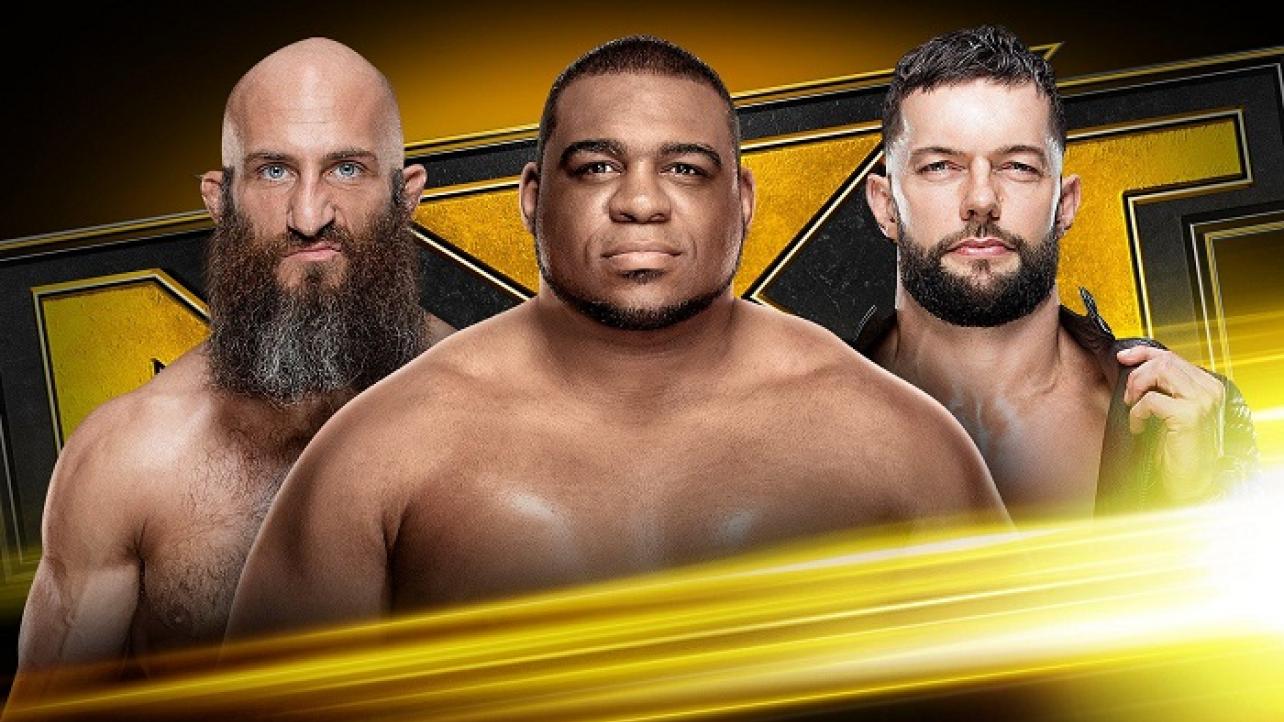 After Keith Lee pinned NXT Champion Adam Cole in a Six-Man Tag Team Match last Wednesday, NXT General Manager William Regal acted quickly to set the stage for the next title bout. Regal declared that the last two men to pin Cole — Lee and Tommaso Ciampa — along with Finn Bálor, who leveled the NXT Champion with a Pele Kick two weeks ago, would square off in a Triple Threat Match to determine Cole’s next challenger for Dec. 18. Who will walk out of Full Sail with an NXT Championship Match in hand? Find out tonight on NXT, live at 8/7 C on USA Network!

Tommaso Ciampa, Keith Lee and Finn Bálor square off to determine No. 1 contender to the NXT Championship

The next challenger to NXT Champion Adam Cole will be determined tonight on NXT, when Tommaso Ciampa, Keith Lee and Finn Bálor square off in a Triple Threat Match. The winner will challenge Cole for the title on the Dec. 18 edition of NXT.

All three men have a claim to the next crack at Cole. Ciampa pinned Cole in the brutal WarGames Match at NXT TakeOver, while Lee pinned the champion in a six-man tag team match last Wednesday. Bálor has had his sights set on the title since his return to NXT, but made his intentions clear when he clocked Cole with a Pele Kick last week.

Who will emerge victorious and earn an NXT Championship opportunity?

Mia Yim will be out for payback when she takes on Dakota Kai tonight on USA Network.

Kai has heavily implied that she was behind the attack that forced Yim out of the first-ever TakeOver: WarGames, and Yim tried to get retribution last Wednesday on USA Network, when Rhea Ripley revealed that her scheduled match with Kai was a setup for The HBIC to attack.

Kai tried to get away, but Yim kept the fight going all the way up the aisle and to the back. Will the ring be able to contain these rivals?

The heated rivalry between NXT Cruiserweight Champion Lio Rush and Angel Garza will reach its boiling point when the two battle for the title tonight on USA Network.

It all started during their first championship encounter several weeks ago, when Garza taunted Rush’s wife and family in the crowd. The champion warned Garza to keep his distance, then sent a message directly to his rival when he decked Garza backstage following his match at the TakeOver: WarGames Pre-Show. Garza had to be restrained from attacking Rush the following Wednesday during a WWE.com exclusive interview.

There will be no keeping these two rivals apart when they square off for the NXT Cruiserweight Title tonight.

Last week, Rhea Ripley got what she wanted, although not in the manner she expected.

NXT Women’s Champion Shayna Baszler granted The Nightmare a championship match on Dec. 18, though it was after she put Ripley to sleep in the Kirifuda Clutch. Ripley suffered a strained vocal box as a result of Baszler’s attack. She’s expected to be healed up for the title match, but is Ripley ready for next Wednesday’s showdown with The Submission Magician? Find out on WWE NXT, live tonight at 8/7 C on USA!

Make sure to join us here at eWrestling.com TONIGHT for LIVE NXT On USA Results coverage from Winter Park!

The #WWE‘s black-and-gold brand returns, as the #WWENXT crew gears up for a STACKED edition of #NXTonUSA, with #NXT Cruiserweight Title action, a HUGE No. 1 Contender match, Mia Yim-Dakota Kai, Baszler-Ripley saga & MORE!