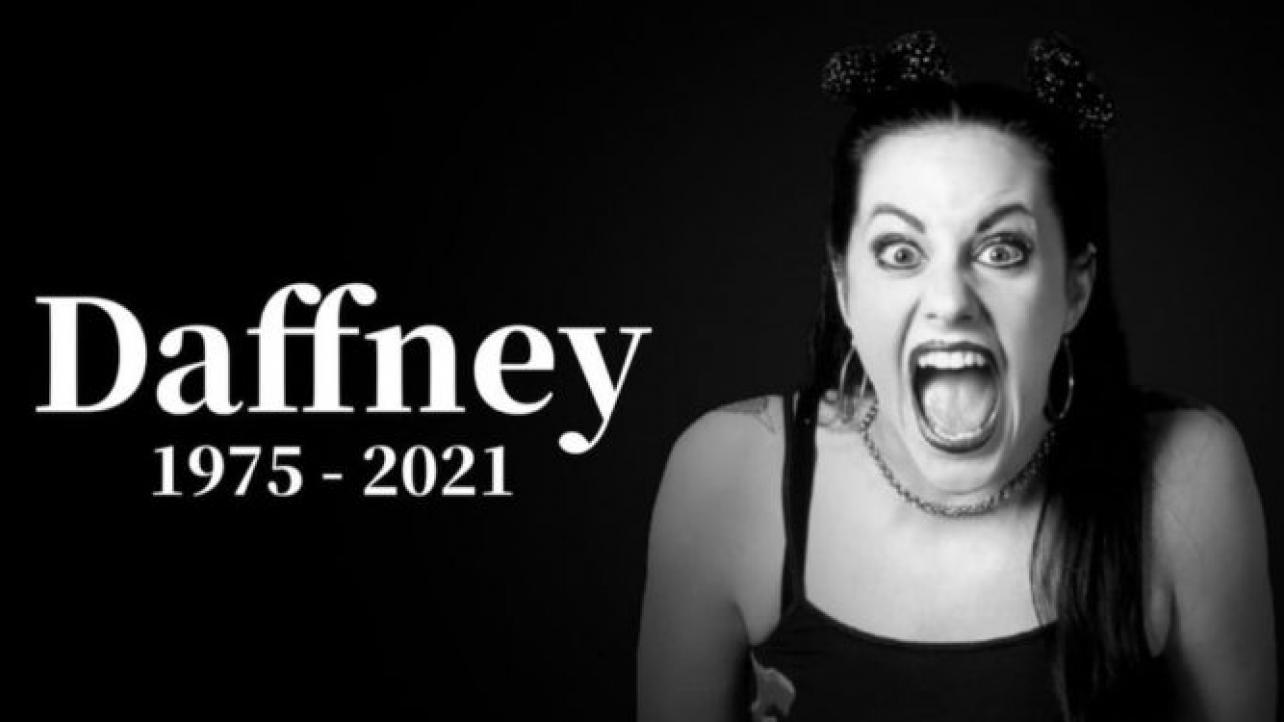 Funeral information and an official obituary on the life and career of Daffney has been released.

The funeral for the women’s wrestling veteran will take place on Friday, September 10, 2021 at the Peachtree Corners Chapel of Crowell Brothers Funeral Homes & Crematory in Peachtree Corners, Georgia. A reception will be held after the service at the funeral home.

Featured below is the official obituary that was published for Daffney on the funeral home website.

Celebration of Life services for Shannon will be held privately on Friday, September 10, 2021 in the Peachtree Corners Chapel of Crowell Brothers Funeral Homes & Crematory. A reception will be held following the services at the funeral home.

Shannon was of the Christian faith. She was a graduate of Norcross High School Class of 1993. She was an American professional wrestler, valet, and actress. Daffney began her professional wrestling career in World Championship Wrestling (WCW) in 1999. In WCW, she was known for her association with David Flair and Crowbar, and she became the second woman (after Madusa) to hold the WCW Cruiserweight Championship before the company closed in 2001. She subsequently appeared on the independent circuit until she signed with Total Nonstop Action Wrestling (TNA) in 2008. Injuries forced her to retire from in-ring wrestling in 2011 but she continued to appear in non-wrestling roles for various promotions until 2018.

As a “military brat”, Shannon Claire Spruill was born on July 17, 1975, at the Wiesbaden Army Airfield, a United States Air Force base in Wiesbaden, West Germany, where her father was stationed. In 1976, her family returned to the United States, residing first in Salt Lake City, Utah, then in Savannah, Georgia and finally on the Scott Air Force Base in St. Clair County, Illinois. They relocated to Oxford in the United Kingdom for three years, before moving to the Ramstein Air Base in Germany until 1987, when her father, by then a Lieutenant Colonel, retired.

In 1985, she had a small, uncredited part in the film Santa Claus: The Movie. In March 1998, Spruill graduated from Georgia State University, with a Bachelor of Arts degree in Film and Video production, with minors in Acting and Music. She went on to work in Media Production, before pursuing full time acting.

In November 1999, she responded to a World Championship Wrestling (WCW) contest looking to acquire new talent and was hired. In WCW, Spruill played Daffney, the mentally deranged, besotted girlfriend of David Flair, managing him and Crowbar. One of Daffney’s hallmarks was a piercing scream when she was lurking at ringside. The gimmick was based in part on Mallory Knox, the character played by Juliette Lewis in the film Natural Born Killers. Spruill has cited Batman supervillainess Harley Quinn as the original inspiration for the character. Spruill’s first appearance was on the December 6 episode of Nitro, when she was shown sitting on her bed and chanting Flair’s name.

On May 8, 2000, Daffney was appointed by Vince Russo to wrestle Miss Elizabeth in her first wrestling match. On May 15, Daffney and Crowbar defeated WCW World Cruiserweight Champion Chris Candido and his girlfriend Tammy Lynn Sytch in a mixed tag team match. The following week on the May 22 episode of Nitro, Crowbar and Daffney faced one another to determine the undisputed World Cruiserweight Champion. Crowbar held back during the match, but still dominated the smaller Daffney. After Candido entered the ring and hit Crowbar with a reverse piledriver, Spruill inadvertently pinned him while trying to revive him and thus became the second woman ever to hold the Cruiserweight Championship. Her reign lasted until June 7 when Lieutenant Loco pinned Disco Inferno in a three-way title defense while Daffney was hurt following interference from Miss Hancock. Daffney went on to feud with Hancock, who had stolen the affections of Flair. Daffney defeated Hancock in the promotion’s first ever Wedding Gown match after Hancock removed her own dress. Daffney then became solely the valet for Crowbar. She had a brief feud with Shane Douglas’s valet, Torrie Wilson, but was sporadically used as a wrestler.

Daffney’s gimmicks included frequently changing hair color, a wide selection of T-Shirts decorated with amusing or bizarre slogans, and her loud screams. She began screaming at the suggestion of WCW writer Ed Ferrara. She was released by WCW on February 2, 2001 due to budget cutbacks (WCW itself was purchased by its rival, the World Wrestling Federation, a month later).

After her release from WCW, Spruill opted to continue wrestling, attending Dusty Rhodes’ Turnbuckle Championship Wrestling training camp in Kennesaw, Georgia for eight months. She also worked for Xtreme Pro Wrestling in 2003 as Lucy, the manager of Vic Grimes. She also appeared in Ring of Honor, where she debuted on April 26, 2003, as Lucy, the valet of the Second City Saints. In July 2003, Spruill was signed to a developmental deal by World Wrestling Entertainment. She worked in Ohio Valley Wrestling as the manager of Aaron Stevens until she was released on December 17 of the same year. Spruill decided to retire from professional wrestling. Intending to focus on her acting career, she sold her wrestling boots to her then-roommate, Mickie James. While retired, Spruill worked as a personal trainer.

In June 2005, she posed for a website owned and operated by wrestling divas Francine and Missy Hyatt. In February 2006, Spruill returned to the independent circuit. Spruill debuted in Women’s Extreme Wrestling on April 6 under the ring name Lucy Furr (“Lucifer”), acting as a lumberjill in a match between Amy Lee and Tai Killer Weed. On June 2 in Irondale, Alabama, Spruill faced El Mexico for the NWA Wrestle Birmingham Junior Heavyweight Championship. With the help of her manager, Robert Fuller (who referred to Spruill as his “Million Dollar Baby”), Spruill defeated El Mexicano to win her third wrestling title. In February 2007, she began making appearances with Georgia Wrestling Promotions both as a manager and a referee.

In April 2007, Spruill debuted as Daffney for Shimmer Women Athletes. She conducted an interview where she revealed her goal was to return to what she did from the beginning of her career and that was to manage. Later that evening she appeared as the manager of the wrestler MsChif. In April 2008 she began wrestling as her Shark Girl character. However, she returned to wrestling as Daffney after only a couple of months. On November 8, 2009, Daffney teamed with Rachel Summerlyn against the International Home Wrecking Crew at Volume 27, only to turn villainous by abandoning Summerlyn during the match, causing a loss to the IHWC. Later in the night on Volume 28, Daffney got disqualified in a match with Summerlyn, after she did not release an illegal hold off her opponent. On April 11, 2010, at the tapings of Volume 31, the evil Daffney defeated Summerlyn in a No Disqualification match.

On June 27, 2010, Daffney won her only Women’s Championship defeating Rachel Summerlyn in the 1st round of Anarchy Championship Wrestling’s 2010 American Joshi Queen of Queens Tournament. She lost the title in the 2nd round to Jessica James. On April 6, 2013, Daffney returned to Shimmer Women Athletes at the promotion’s first ever internet pay-per-view, Volume 53, where she appeared as the manager of Regeneration X (Allison Danger and Leva Bates).

Daffney spent the next couple of months mainly managing Stevie and Raven, before making her in-ring return on the February 18, 2010, episode of Impact!, losing to the TNA Women’s Knockout Champion Tara via disqualification, after hitting her with a toolbox. After the match, Daffney continued her assault, before being dragged away by Dr. Stevie. The following week on Impact! she annihilated ODB in similar fashion as it was noted that she had her eye set on the title.

On the March 8 episode of Impact!, Daffney cost Tara and her tag team partner Angelina Love the Knockouts Tag Team Championship by hitting her with the Women’s Knockout Championship belt during a match for the vacant titles. At Destination X Daffney failed in her attempt to win the Knockout Championship from Tara, but managed to steal her spider Poison from her after the match. The following day on Impact! Daffney used distraction from Poison to pin Tara in an eight wrestler tag team match to earn her a First Blood match for the Women’s Knockout Championship the following week. The following week Tara defeated Daffney in a First Blood match after hitting her with a toolbox. The following week Daffney was one of the four winners in an eight knockout Lockbox match, contested for four keys to four boxes containing prizes. During the contest Tara, one of the three other winners, won back Poison, while Daffney came up empty handed and was forced to strip down, but before she could she was attacked by Lacey Von Erich. The attack resulted in a match on the April 19 episode of Impact!, where Daffney, now seemingly a face, and a partner of her choice, ODB, unsuccessfully challenged Von Erich and Velvet Sky for the TNA Knockouts Tag Team Championship. At the following day’s Impact! tapings, Daffney was injured in a dark match against Miss Betsy in her tryout match and was taken to a hospital, where she was diagnosed with a deeply bruised sternum, a severe stinger, and a concussion.

On May 26 it was announced that Spruill had been cleared to return to wrestling. She made her return at the June 14 tapings of Xplosion, wrestling once again as a heel and defeating Taylor Wilde with the help of a chain, only to have the referee of the match catch her afterwards, leading to Wilde defeating her after a restart. On the December 9 episode of Impact!, Daffney teamed with Sarita in a first round match of a tournament for the vacant TNA Knockouts Tag Team Championship, where they were defeated by the Beautiful People (Angelina Love and Velvet Sky). This marked Daffney’s final appearance for TNA as of March 15, 2011. On September 1, 2018 Daffney was inducted into the Alabama Hall of Fame.

In lieu of flowers the family asks that contributions be made in honor of “Shannon Claire Spruill” to National Alliance on Mental Illness, https://namiga.org and or Boston University’s Chronic Traumatic Encephalopathy, https://www.bu.edu/cte/.

On-line condolences may be expressed at www.crowellbrothers.com.