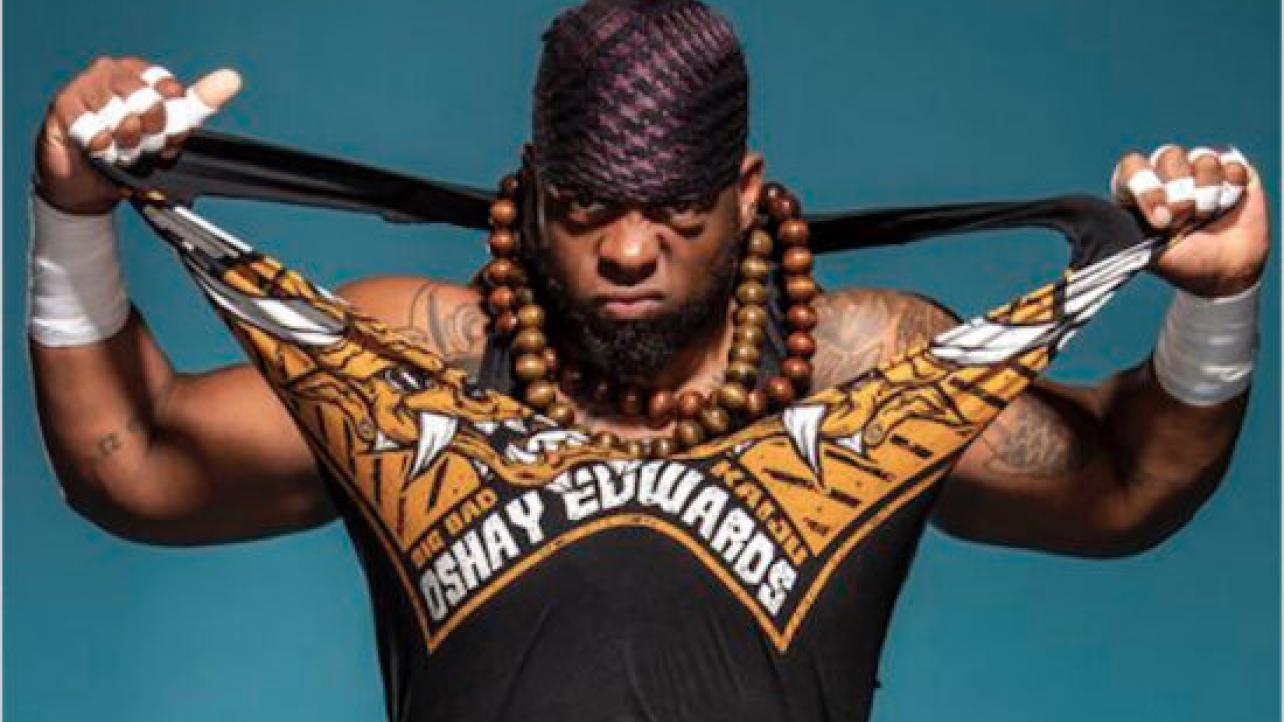 During his recent interview with The Shining Wizards Wrestling Podcast, Ring of Honor’s O’Shay Edwards recalled coming out as bisexual. “The Silver Tongue” also discussed Shane Taylor Promotions, and his own future goals. Check out his comments below.

On being a member of Shane Taylor Promotions:

“Everybody has the same mindset. Everyone kind of goes about it a little differently, but everyone has the same mindset. Everyone has their strong suits, and everyone has where they excel and where one guy excels the other guy may not so everybody just kind of slides in. So, no matter what, we got you covered. Everybody in our group does everything well. There are some aspects that people excel better than others but that doesn’t take away from anything. Our biggest thing is that we don’t want you to give it to us. That’s too easy. The way we’ve been living our life, nothing’s easy. So why would this be easy? We’re built differently. We’re ready for the grind. We’re ready for you to tell us no and give us the excuse, and give us the reasons why we can’t. And then, what we end up doing is giving you the reasons why we can and then we go do it. Talk is cheap. Everyone does it. The action is really what separates you from everybody else, so when we’re all together, we are a force, by ourselves. But when you put us together, no one can stop us. That scares a lot of people because we’re solidified in the ring, and we’re solidified out of the ring. We talk to each other every day and it’s a giant business meeting. We goof off and everything, but for the most part, it’s a business meeting and we talk about how we can further the brand, and how can further each other’s careers. We’re always looking for a new way to get better, and better, and better. Because for us, this is what we do. We continue to get better. We continue to strive for it because we’re trying to get paid. And we don’t care whose name is on that check as long as it clears.”

On his decision to come out as bisexual:

“If it wasn’t for wrestling, I wouldn’t have done it. Before I became a wrestler, I was a fireman for like fifteen years. Before that, I played college football, and pretty much at every single level. I knew this when I was like eighteen or nineteen years old, but there ain’t no way in 2003 or 2004, all of a sudden, I’m going to come out in a football locker room. Are you kidding me? My career would be done. Over. The times were different. I joined the fire department. Same thing. The fire department is full of Type A personalities. And there were a few firemen at the time that were out, and I saw the crap they were getting and everyone thought it was a joke. I was like, there ain’t no way (I’m coming out) because I’m gonna have to fight somebody. Someone’s going to tell a wrong joke and I’m going to have to fight somebody. And I’m not going to have all that. It’s not so much that I was ashamed, I’m just like man this isn’t it. Like, I’m living in the south. I understand where I live and I read the room rather well and it wasn’t the time. IT wasn’t until I got into wrestling and started meeting everybody and truly being accepted for who I am, I was like, If I’m gonna do this, this is the time. This is it. And, it was great. I was met with an outpouring. And if anybody said anything negative, they sure as hell didn’t say it to my face. Everyone’s been real cool. I’m a bisexual black man living in America. It’s who I am. I don’t define myself by it, but it’s who I am. It’s a part of me. It is what it is. I’m not asking anyone to really accept it. It’s not for you to accept. This is me. Once my bills get paid on time, that’s all I care about at the end of the day. But, it’s been great. Everybody’s been really cool.”

On his own future goals:

Part of STP’s goals is to be one of the most cohesive groups, not so much in Ring Of Honor, but in the business of wrestling altogether. We want to be — like we’re great individually, but you put us together and we’re just a machine. You’re not going to stop this machine. We’re trying to solidify the six-man titles as legit. We’re trying to take over the tag division as legit. We’re trying to capture everything. We’re trying to be a part of everything. We want our names in the conversation. We’re not trying to be a part of the conversation, we want to be the conversation. That’s within Ring Of Honor. That’s within the independents. It doesn’t matter, it’s just what we’re trying to do. Individually within Ring Of Honor, man I’m trying to be recognized as the greatest wrestlers in the world. I’m not PURE, and that’s perfectly fine with me. It’s cool. But when you step in the ring with me, win, lose, or draw, I’m going to hurt you. Some things you break just don’t get fixed. The television title: I want it. I want to etch my name in those plates. I want to be one of the greatest to ever hold it. And when that’s done, I want the world title. I want to go against everybody. I’m a grown man. I’m not afraid of nobody. I’ve gotten my ass kicked before and I’ve doled out some ass-kicking too. What are you going to do to me that nobody’s ever done before? Outside Ring Of Honor, I want to take over the world. I want to be in Germany. I want to be in England. I want to be in Mexico. I want to be in Japan. I want you to see me, and know that when this dude shows up, this dude isn’t playing around. This guy’s about his business and my business is putting you in the dirt. Hey man, sorry for you. Don’t take this personally, but this is the way it’s gotta go down. And if you don’t like it, try to stop me and we’ll see where we go from there.”