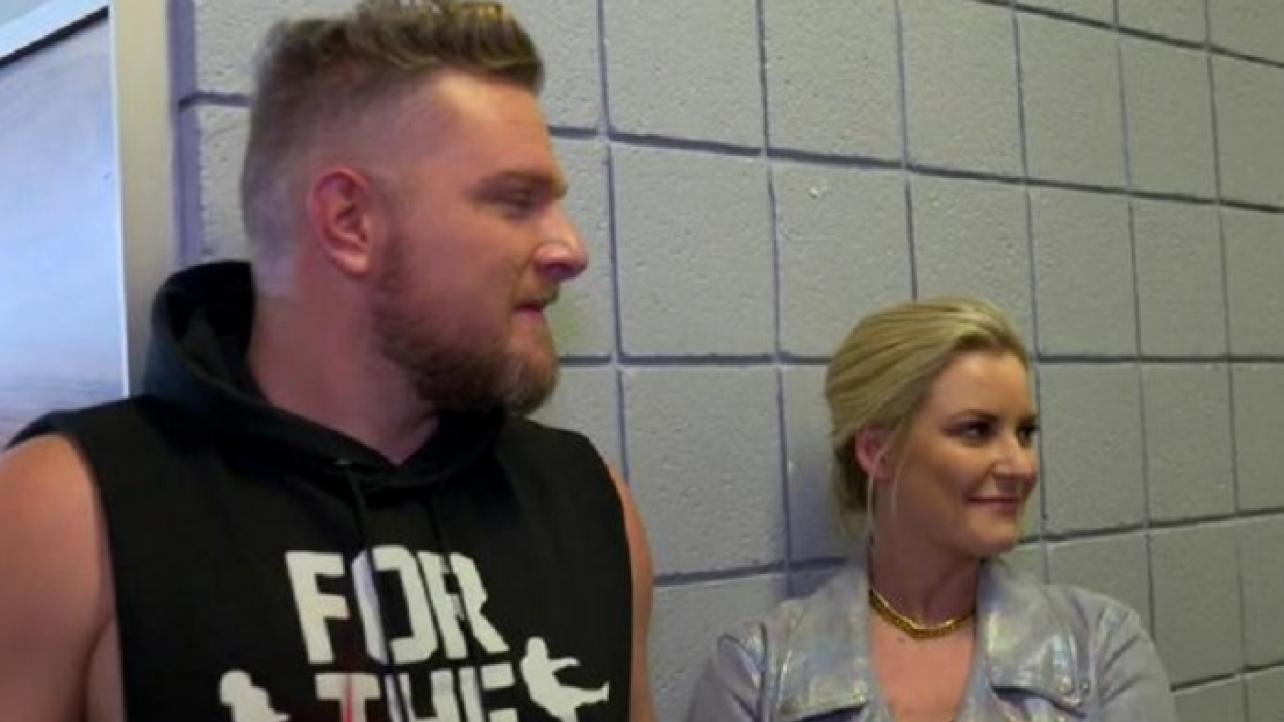 Following a crazy night of unexpected chaos, Renee Young and Pat McAfee spoke backstage at the KeyBank Center in Buffalo, New York this past Friday night after getting the late-notice call to work this week’s edition of WWE SmackDown On FOX.

After the show, WWE released a video interview with Renee and Pat backstage at the show, where they explained how they found out they would be working the show due to the travel issues that WWE Superstars and employees faced during their return trip from Saudi Arabia following Thursday’s WWE Crown Jewel pay-per-view at King Fahd International Stadium in Riyadh.

“Just a fun night,” said Renee when describing the evening. “I mean it was so chaotic that there was no time to prepare for anything. No time to get stressed about anything.”

From there, she explained how she found out she would be working the show.

“I mean we got the call … pretty last minute … I found out last night when we knew that there was some mechanical issues over in Saudi Arabia, that I was probably doing commentary but maybe I was doing backstage interviews,” Renee explained. “I really didn’t know until later today, it was like, ‘You’re doing it.’ So, here we are.”

After that, Pat McAfee told the story about how he found out he would be working the show, which lead to him borrowing an airplane from the owner of the Colts.

“And much like her … I got the text at 1:42pm, today from Mr. H that said, ‘Have you heard that have been some travel issues, can you make your way to Buffalo?'” McAfee started. “Jim Irsay, owner of the Colts literally leant me his plane. I didn’t know we were that good of friends to be honest. I was throwing a hail mary and he responded.”

McAfee continued, where he would mention the “bucket of makeup” he was wearing for his on-camera appearance on WWE’s FOX broadcast on Friday evening.

“So, I got here about an hour-and-a-half before the show,” McAfee explained. “To get to work with Renee, Tom [Phillips] and be on SmackDown with a bucket of makeup on my face … this has been a dream-come-true, bucket-list-type situation here in beautiful Buffalo, New York.”

Check out the exclusive backstage video interview from WWE Friday Night SmackDown On FOX with Renee Young and Pat McAfee from the KeyBank Center in Buffalo, New York below.

.@ReneeYoungWWE got kicked in the face. @PatMcAfeeShow wore a bucket of makeup…

…but here they are, still standing, and discussing the whirlwind that was last Friday’s #SmackDown! pic.twitter.com/yz1rxPx5lq

VIDEO: @PatMcAfeeShow reveals he borrowed airplane from @Colts owner @JimIrsay to make it to @WWEonFOX broadcast of #SmackDownLIVE this week at @KeyBankCtr in #Buffalo, #NewYork + @ReneeYoungWWE explains how she got the call to work the show#WATCH: https://t.co/PT00znRGvZ pic.twitter.com/s4o4aGaXWU