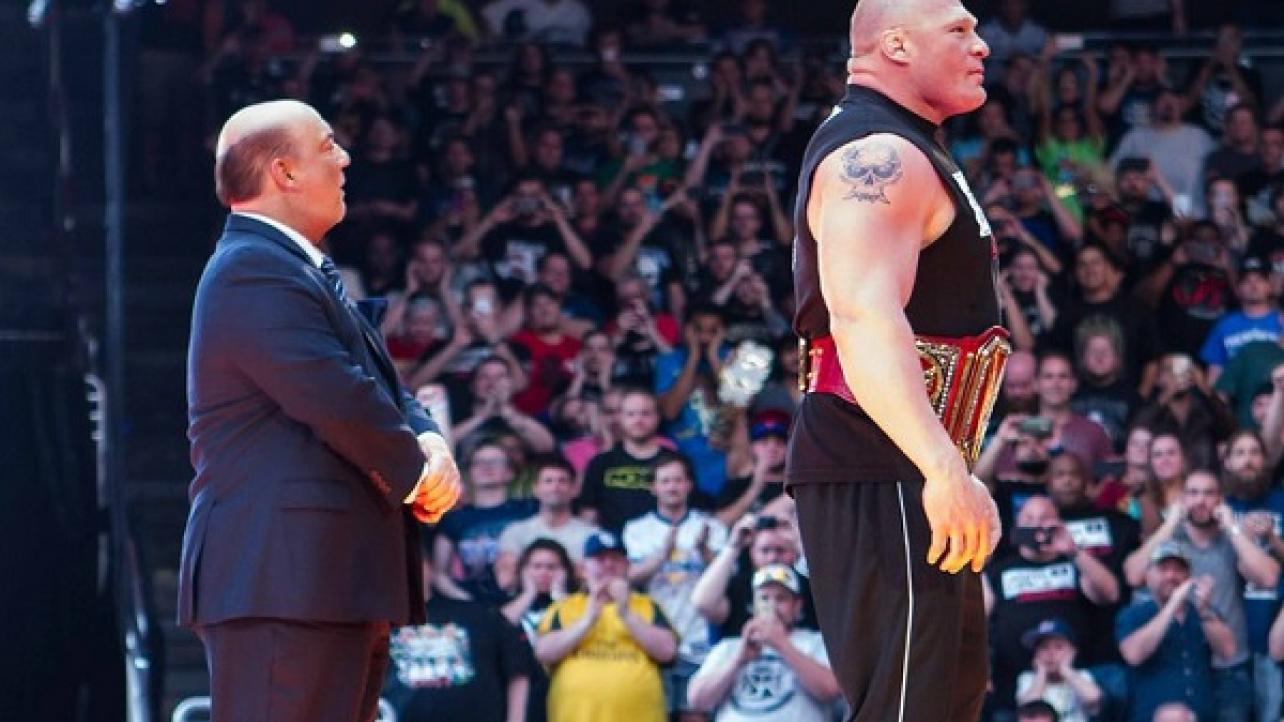 Paul Heyman recently spoke with the folks at Newsweek to promote next month’s WrestleMania 34 pay-per-view. Featured below are some of the highlights.

On what would happen if Brock Lesnar were to lose the WWE Universal Championship to Roman Reigns at WrestleMania 34: “I don’t think it’s any secret that Brock is looking to get back into the octagon. He is obviously eyeballing another fight in UFC. There’s no secret. He’s posing for pictures with Dana White wearing a UFC shirt in the UFC offices in Las Vegas. That’s not a negotiating tactic, Brock Lesnar wants to compete inside of the octagon. There’s no leveraging that; it’s a fact.

“I have an agency that has expanded so fast we’re now expanding into also being a full-fledged production studio. We have several projects and deals we will be announcing after April 8, for film, television, representing clients etc. We both have a number of projects we have been interested in pursuing that will start to kick off after WrestleMania. That doesn’t mean Brock Lesnar can’t retain the title and we do those other projects simultaneously in a continued run as Universal Champion. The proof I offer to you is Brock Lesnar fought Mark Hunt at UFC 200 and, six weeks later, main evented SummerSlam against Randy Orton.

“Brock Lesnar can do both and he has proven that time and time again. And I’ve been the co-founder and co-running my agency since I came back in 2012. I’ve been working on outside projects this entire time, so we can certainly walk that line when it comes to working in WWE and other projects. Mine is entertainment-based, Brock’s is beating the hell out of someone in the octagon.”

On his reaction to Daniel Bryan finally getting medically cleared to return to the ring: “Ecstatic. This is all Daniel Bryan has wanted since the moment he was told he was being forced to retire. And the emotional rollercoaster that he has been on since that moment has always been with the light at the end of the tunnel, thinking ‘somehow, someway a miracle will be bestowed upon me that I can be cleared and step back into the ring and do what I love to do more than anything else in this world.’ That’s all he wants to do. It’s what he dreams about, what he envisions, it’s what he wakes up wanting to do and thinks about when he’s going to sleep. So ever since that moment the doctors told him ‘sorry we’re going to have to advise if you retire’ the only dream Daniel Bryan has had, the fantasy in his life, is to be cleared and to exploit the opportunity of stepping back into the ring. And now he has that chance.

“So I’m ecstatic for Daniel Bryan. Very few people I know deserve to live out their dreams more than Daniel Bryan.”

On if he wants to see Bryan vs. Lesnar: “I have wanted to see Brock Lesnar vs Daniel Bryan even before Lesnar debuted on the main roster when Bryan was known as The American Dragon. I loved his matches even in the early part of his career and found him to be one of the most compelling, riveting performers in the history of this industry.”

Check out the complete Paul Heyman interview at Newsweek.com.