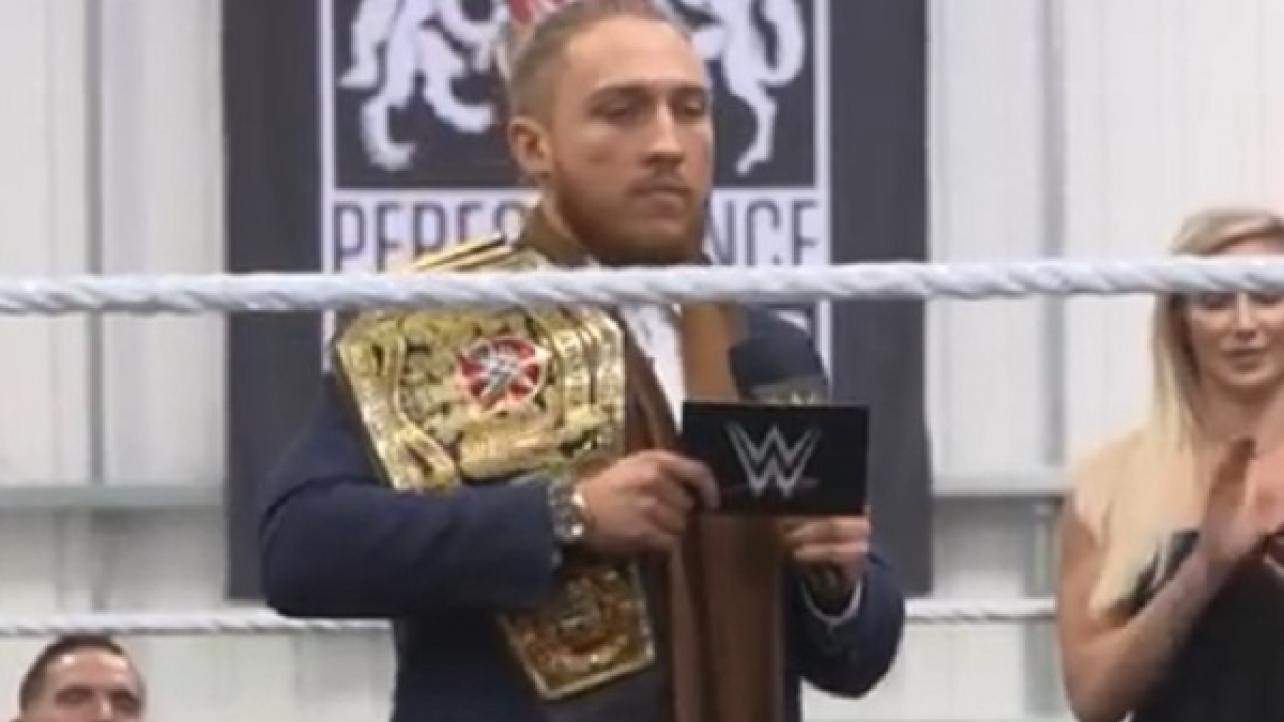 Pete Dunne On Triple H’s Promise To Him, Dream Match With Lesnar & More

As noted, WWE United Kingdom Champion Pete Dunne recently appeared as a guest on Edge and Christian’s podcast, E&C’s Pod Of Awesomeness, for an in-depth interview ahead of his title defense against Joe Coffey in the main event of Saturday’s NXT U.K. TakeOver: Blackpool live special on the WWE Network. Featured below are some of the highlights from the interview.

On the different priorities that NXT U.K. talent has compared to other WWE performers exclusively focused on making it to the main roster as soon as possible: “It’s this unique opportunity that we never thought existed, and then, being able to do that, and then being responsible for our own careers and taking the next step with that. But then feeling … pressure’s the wrong word because we’ve enjoyed the experience … but feeling that responsibility to [say], ‘Okay, let’s make a brand for everyone in the UK, for not only the wrestlers that have been doing this for so long,’ and ever since it went off TV — five years or however long it has been — there has been a bit of a gap. ‘When will British wrestling come back to TV?’ To get the opportunity to bring it back and to give us that little bit more of responsibility and a good focus as well. Instead of us thinking we need to get to the main roster as quick as we can, we have a completely different focus, which was ‘let’s build this from the ground floor and do something completely original.'”

On being promised by Triple H and William Regal from day one that the NXT U.K. brand would have some kind of regular NXT U.K. TV show at some point: “We were promised from Day One that something would happen. They just said they didn’t know when and they just said they didn’t know what it was going to be exactly. And it was still a long time after that [Tyler Bate TakeOver] match happened, but I definitely feel like that match helped to cement [NXT UK] a little, especially for a worldwide audience. It made them feel like [NXT UK] is something they would want to see and it legitimized the title a little bit more. But we were told from Day One by Regal and Triple H from even when we were doing the press conference and stuff that there would be a full time show.”

On potential dream matches against Brock Lesnar, AJ Styles, Rey Mysterio and Matt Riddle: “The one that I always say would be sort of a dream match for me would be Brock Lesnar. I think that would be a sort of interesting mix of styles, especially because a lot of guys my size don’t wrestle the style that I do, so I think that would be really interesting for people to watch. AJ Styles is a massive one for me. He’s someone I always wanted to wrestle. Rey Mysterio, he’s up there too. But then, aside from that, even in the NXT brand, there are so many people I haven’t had a chance to work with. I got to do one or two matches with Matt Riddle on the independents, but I’d love to work with Matt Riddle in NXT. I think we’d be able to do some really interesting stuff that people haven’t seen before.”

On the crossover between WWE brands leading to interesting possibilities: “It’s getting to the point now where different [WWE] brands can mix with other ones and there are so many different options all under the same banner, which has never happened before and I didn’t really think it was possible. It has all happened so fast. Before you could only really make a name for yourself on the independents or Japan, but Mustafa Ali is someone who has been chipping away since the cruiserweight tournament. He almost had this run on the main roster that someone like AJ Styles or Samoa Joe, someone like that, would have on the independents, but he has been able to do that within this company, which is a really cool idea and it’ll be really interesting to see it even more in the next few years.”

Check out the complete episode of E&C’s Pod Of Awesomeness featuring the Pete Dunne interview below, or at WestwoodOnePodcasts.com.

Pete Dunne On Triple H’s Promise To Him, Dream Match With Lesnar & More