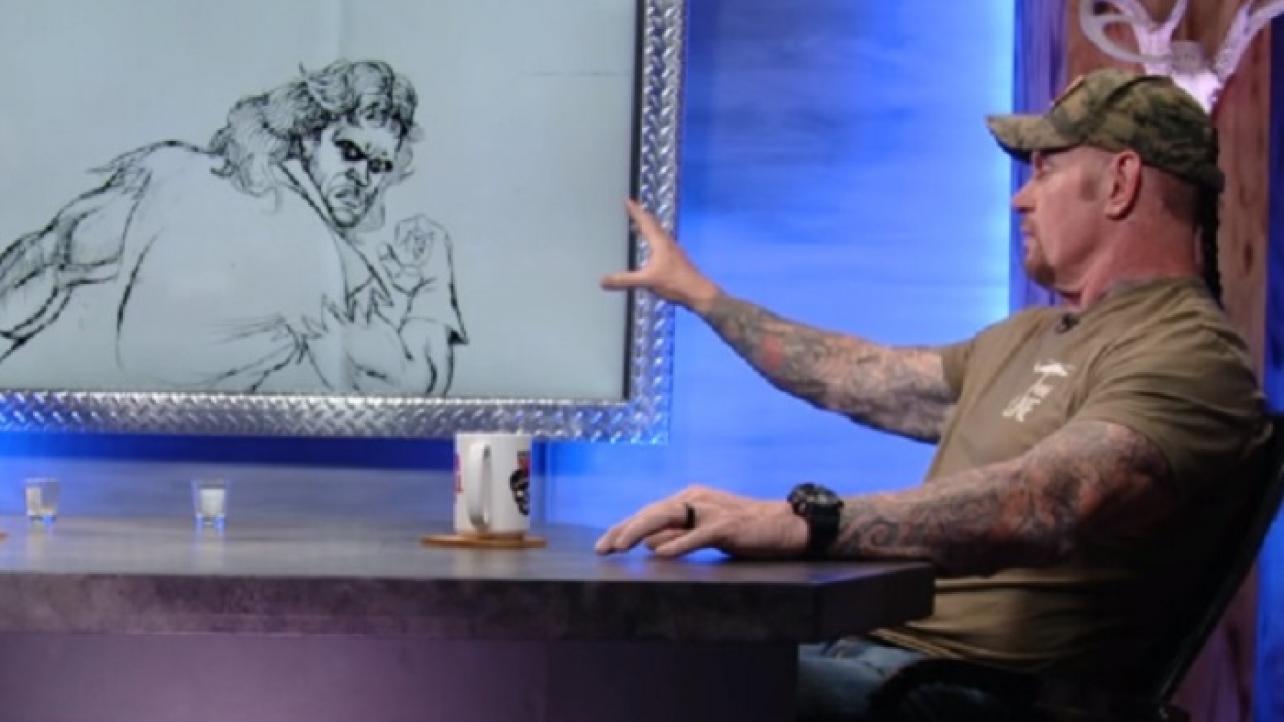 During the premiere of the new Broken Skull Sessions podcast featuring “Stone Cold” Steve Austin’s interview with The Undertaker, rare original drawings and storyboards for the original Undertaker character were shown as “The Dead Man” spoke at length about the true origins of his iconic WWE persona.

The new show hosted by the WWE Hall Of Fame legend debuted on the WWE Network on Sunday night immediately after the WWE Survivor Series 2019 pay-per-view.

After talking about his journey into the pro wrestling business through “Buzz” Sawyer, which also covered his early days in Memphis Wrestling and WCW, as well as his dealings with Paul Heyman, The Undertaker took a shot of Jack Daniels Whiskey given to him by Austin, as “The Phenom” and “The Texas Rattlesnake” geared up to “pull back the curtain” on the true origins of The Undertaker character.

The Undertaker spoke about fearing he would initially become “The Egg Man” before getting a chance-call from Vince McMahon asking him, “Is this The Undertaker?” to which he, fearing the Egg Man persona and thinking the name sounded cool, replied, “Yes!”

From there, rare drawings and storyboards for the original Undertaker character in WWE were shown while he spoke about meeting with McMahon at his home as the idea was pitched to him. He claimed the character was described to him as a traditional Old Western Undertaker, which he admitted seemed cool to him and fit with his personality at the time, which he says included “some darker type stuff.”

He would go on to talk about the changes he would need to make to his in-ring style of working to make the character truly connect and work as a whole. He noted that he would do everything slow until it was time to strike, and then he would use the unexpected athleticism that fans at that time would assume a guy his size isn’t capable of.

“The Dead Man” pointed to classic horror films and characters such as Michael Myers from Halloween and Jason from the Friday The 13th movies as inspiration for some of the ideas he would implement to make the change to the early version of The Undertaker.

From there, the debut of The Undertaker at the WWE Survivor Series 1990 pay-per-view was shown and the two would continue to talk about the rest of the career of “The Dead Man” as the interview — which runs at one hour and 39 minutes in length — played out and would go on to cover a heap of various subjects.

The official synopsis for the series premiere of Broken Skull Sessions reads as follows:

If you are not a WWE Network subscriber, fear not, as we’ve got you covered here at eWrestling.com!

Featured below are several photos of the rare drawings and storyboards for the original Undertaker character in WWE, as seen on the premiere episode of Broken Skull Sessions, as well as three FULL-LENGTH preview clips of Steve Austin’s interview with The Undertaker from the show.