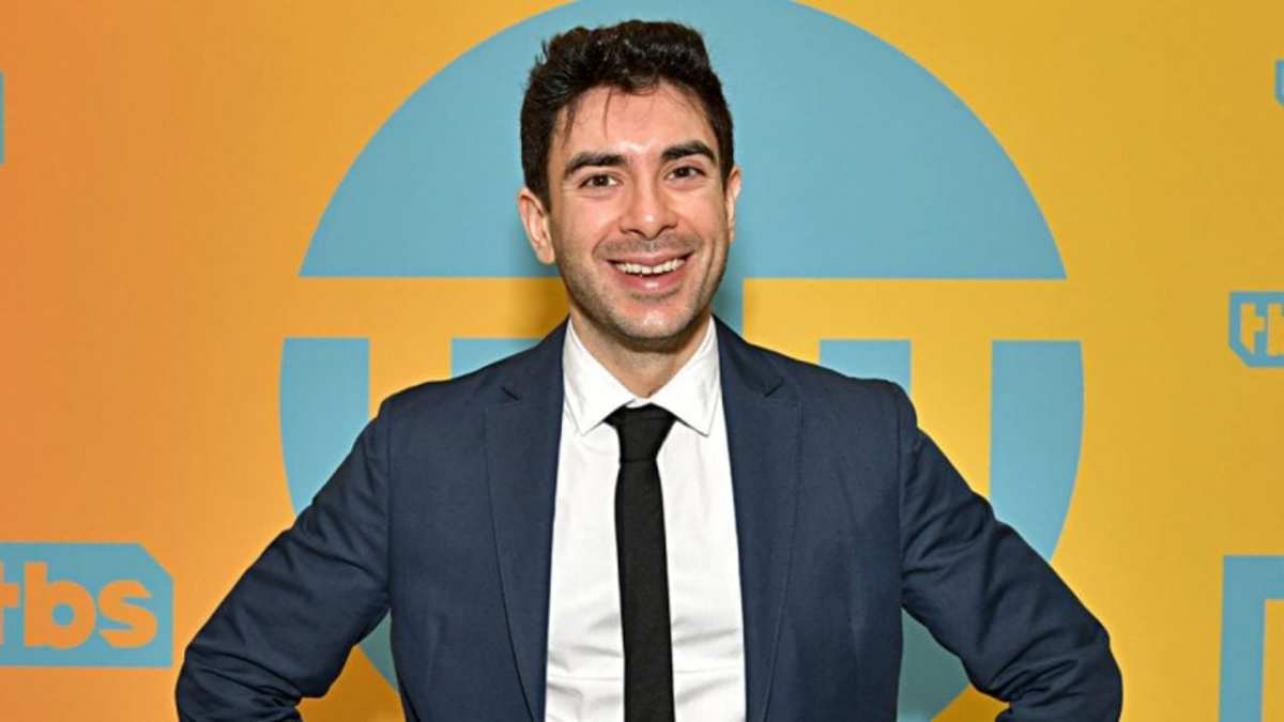 — Ahead of Double or Nothing, AEW President Tony Khan held a conference call with members of the media today. Here is a recap courtesy of Mike Johnson, pwinsider.com:

AEW President Tony Khan took part in a media call today to promote this Sunday’s AEW Double or Nothing 2022 PPV. Here are highlights from the discussion:

Tony is really excited to be on the call and thanked everyone for being here for the call. He thanked the media for helping to spread AEW to 130 countries and counting.

Kenny McIntosh asked about MJF’s status. Khan said wrestling strives when the real life intersects with what’s on the screen. There was no free agent market when AEW started. That has changed. The match is a huge opportunity for Wardlow to become an official part of AEW and be something more than MJF’s thug. He said that everything else MJF has brought to the conversation about his gripes, contractual discussions and other issues adds to the interest in the match.

Tony was asked about Warner Bros. Discovery and the relationship going forward there. Khan said they are featured in the best way possible via Dynamite and Rampage. They’ve gotten great feedback and feels they will have a great relationship. They were blessed that Warner Bros. Discovery is throwing them an awesome party at their Los Angeles debut next week. He hyped up how big the LA debut is going to be. Some of the top execs will be at the Los Angeles Forum to visit and get to know AEW. To have the top people from the largest creator of content in the world host and spend time with them is really cool. There are other shows that aren’t getting that attention or aren’t shows anymore and you can’t get more positive than the great feedback they’ve gotten. He’s so excited about the partnership and credits it to the wrestlers and the fans of AEW. They gave AEW a chance to survive and thrive.

Khan was asked about the CM Punk vs. Hangman Page main event and whether he was tempted to push Punk into the title picture right away when he debuted nine months ago. Khan said that he thought it made sense for Punk to come in and fight top wrestlers and work his way towards the top spot and the title picture. Punk worked really hard and has put in the work in and out of the ring. He worked a lot of veterans and a lot of younger talents. He said Punk vs. Eddie Kingston was a great match and helped give Kingston some spotlight, which was deserved. He said Punk and MJF was the most personal feud in AEW history. They’ve set new milestones with PPVs, merchandise and more with Punk, but Hangman is the best champion in wrestling. Hangman wasn’t handed anything and had years of hard work to get to where he is. Punk didn’t have a Hollywood comeback for one or two matches but came back every week. He said it’s like two trains colliding this Sunday at the PPV.

Khan was asked about how Forbidden Door being held in Chicago will change plans for All Out being held there. Khan praised Chicago, which is his home and he loves very much. Forbidden Door being at the United Center has no bearing on whether All Out will be in the Chicago area. They are four years out from the All In show that helped create AEW and things continue to grow. They will have to keep the tradition of All Out around Chicago important.

Khan was asked about the Owen Hart Foundation tournament and having Dr. Martha Hart there. Khan said he was a big fan of Owen growing up and was fortunate enough to see Bret and Owen Hart live. Due to the circumstances of his passing, he wasn’t able to truly have his legacy celebrated today. It meant a lot to have the Hart family in Long Island and to make that show an event that was meaningful. They all appreciate and have respect for history and have great love for Owen Hart. They wanted to have great wrestling matches and to have his family there to honor him and come back this weekend means a lot. He’s looking forward to Martha Hart having a chance to speak to the fans. He has enjoyed a number of matches in the tournament and has enjoyed having Owen associated with great wrestling matches. Samoa Joe vs. Adam Cole is a dream match for him personally. He said this was a different build for Double or Nothing because of the tournament. It was a difference cadence but similar to March Madness in that you don’t know who’s playing until 48 hours before the game because of the flow of the tournament. It took getting used to but he feels people enjoyed the matches and he’s excited for the finals. He looks forward to do the Owen Hart Foundation tournament annually.

Khan asked if he’s ever thought about doing a one night tournament as a PPV. He said that something he’s learned from the transition from fan to matchmaker and promoter is to take care of the health of the wrestlers and doing multiple matches on one night isn’t something he would necessarily ask that of the wrestlers. He’d like to see the wrestlers give their all in the finals, and given the way tournaments go, you are more likely to have injuries when talents are working multiple matches, which is why he laid out the Owen tournament the way it has been produced.

Khan was asked about grabbing more fans. Khan said for them, the best thing they’ve been able to do is see the year to year growth of their PPV numbers. They have to continue developing and take care of the talents and treat them well. He wants to have a company where young wrestlers want to sign up and grow and learn, but he always wants to continue to get top talents who enter free agency. You have to get young talents and recruit big names. They’ve added some of the top names in the sport over the last year. There’s a potential to hit new TV markets and that brings new opportunities to bring new eyeballs and revenue stream. There’s a potential for streaming service and the Warner Bros. Discovery partnership will help.

Khan said that everyone who has wrestled CM Punk thus far has come out better as part of the process. Punk amazes and surprises him and helped grow their business when he arrived, but has been a great mentor backstage. he’s helped them get more fans and sold more merchandise but will watch matches and help. He’s got a great mindset for giving back to the younger talents. He’s done a lot for the veterans as well. He’s been involved in some compelling TV. He hyped up Punk vs. Hangman again.

On the ROH purchase, Khan said that he was told if he paid a certain price, he could purchase Ring of Honor, so he agreed to do it. He did it personally and looked at it as the price and opportunity was right. He was looking out for AEW. It made sense for ROH to be its own brand and stand on its own feet. He’s not saying it’s a subsidiary or secondary to AEW. Supercard of Honor was one of the biggest ROH shows in years and when the numbers come in, it looks as if 20 times the amount of people ordered it vs. a traditional ROH show. He wants two different promotions that are operated separately but working together. Having some of the top ROH talents on AEW programming.

Khan was asked about the DDT Pro and whether there would be some women’s wrestlers coming in. He praised the talents who have come in from DDT in the past and left the door open for more.

Khan was asked about the Hangman Page-CM Punk promo from last night given Page buried Punk and treated him as an interloper into the company, given it was out of left field for the build thus far. Khan said the segment made sense because they are two guys who don’t like each other and want to fight. He said the comments helped make it a compelling fight and if you were someone like Page there from day one, you could see his perspective.

Khan was asked about talents speaking out about women’s health care and equality. He wants AEW to be a place where wrestlers can speak out on these things. He wants his talents to be authentic and for the fans to see who these people truly are, just as they do when they are on social media. He wants to keep making AEW a better place in and out of the ring for the wrestlers.

Khan was asked what the winners of the Owen Hart tournament will receive. Khan said everyone will find out Sunday. They’ve gotten approval from Dr. Martha Hart and her family and gotten their approval. He talked up the tournament.

On a potential Canadian debut, Khan would love to do it. They were shut down from touring and now they are servicing markets they planned to visit in 2020. Canada is something they want to do in the future. He praised TSN as a broadcast partner as well as the local media who love pro wrestling since there are so many great Canadian pro wrestlers, including the ones in AEW right now. He talked up his excitement at running the country when they can.

Khan was asked about John Hennigan. He gave a great match against Samoa Joe and gave them a great surprise. He said he’s open and interested in bringing Hennigan back in the future.

On whether there’s a timeline for ROH live events and TV, Khan said he’s still working on it. They’ve gotten some “very kind interest” and pointed out they are being hosted in Los Angeles next week by Warner Bros. Discovery. He’s looking forward to conversations about ROH and how to expand the current and future AEW programming as they start the fourth year of the company. He would love to get a ROH weekly series broadcasting or streaming “very soon” and he’s hopeful they’ll have ROH TV and keep the ROH PPV calendar going as well. They have great wrestlers and champions right now. He feels its the strongest position ROH has ever been in.

On new potential titles, Khan said that they’d love to do a trios titles as they get more teams and more talents who are injured back in the ring. He’d like to add more titles and champions if they make sense as they go.