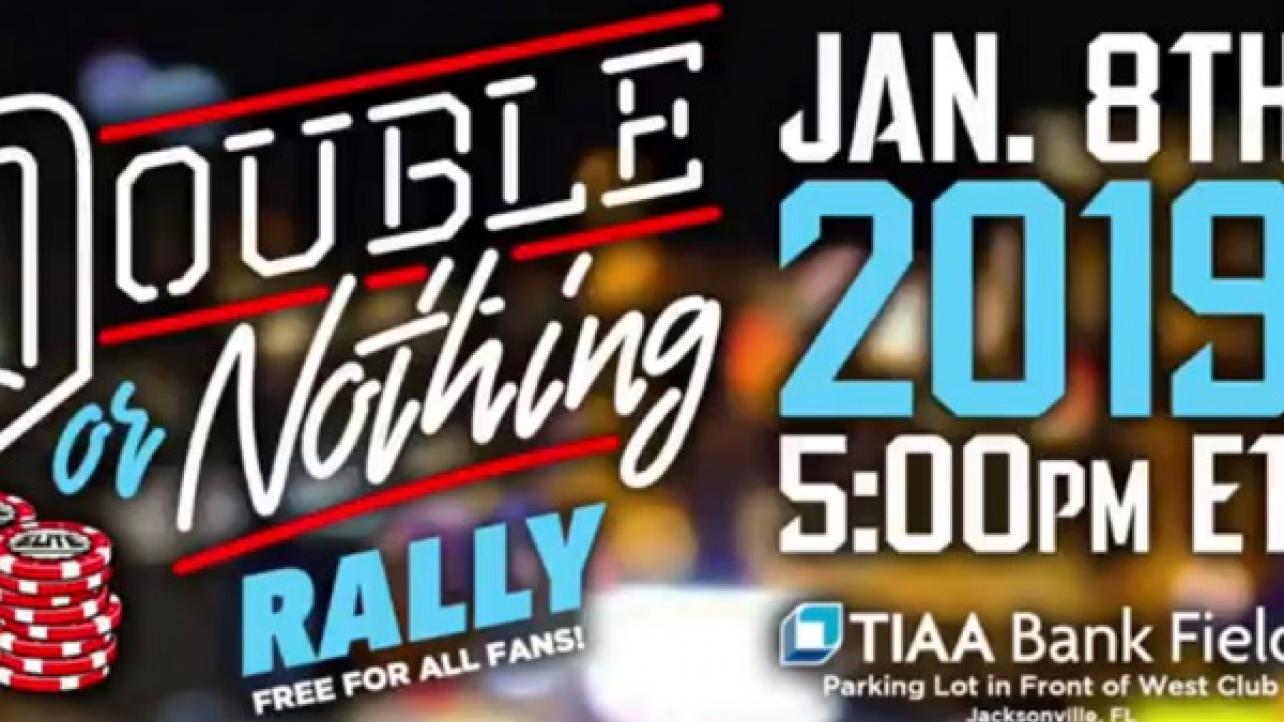 Reminder: AEW’s Double Or Nothing Rally Live TODAY (1/8) In Jacksonville

As noted, last week it was announced that a DOUBLE OR NOTHING RALLY will be going down in Jacksonville, Florida for Tuesday, January 8th at 5pm EST.

THE ELITE ANNOUNCES “DOUBLE OR NOTHING” EVENT RALLY IN JACKSONVILLE ON TUESDAY, JANUARY 8 @ 5PM

JACKSONVILLE, FL, (January 3, 2019) – All Elite Wrestling, the new wrestling promotion headlined by members of The Elite, today announced plans for a special DOUBLE OR NOTHING event rally in Jacksonville, FL. The event, which is free and open to the public, will take place on Tuesday, Jan. 8, at 5pm ET outside TIAA Bank Field in Parking Lot J (near Gate 1, adjacent to the TV compound).

The rally is on the heels of the unveiling earlier this week of DOUBLE OR NOTHING, the inaugural event under the new All Elite Wrestling (AEW) banner. Keeping in true The Elite fashion, attendees can expect the unexpected as the rally will showcase the true spirit of wrestling entrepreneurialism and feature special guests, inside info and limited edition merchandise. Fans can also watch the event rally live on the “Being The Elite” YouTube channel, as well as @AEWrestling (Twitter), /TheYoungBucks (Facebook), @TheBrandiRhodes (Instagram), and can interact socially at #AEW.

“The Young Bucks, Matt and Nick Jackson, are right with me in committing to deliver on our promise to change the wrestling landscape in 2019, and the DOUBLE OR NOTHING event is just the start,” said Cody Rhodes. “The time to change the world is now.”

Make sure you are following the Official #AllEliteWrestling Social Media Accounts pic.twitter.com/Xzfdbw6Sha

Join us January 8th in JACKSONVILLE for more information on Double or Nothing…and AEW! pic.twitter.com/72gnO6fqOh

Reminder: AEW’s Double Or Nothing Rally Live TODAY (1/8) In Jacksonville