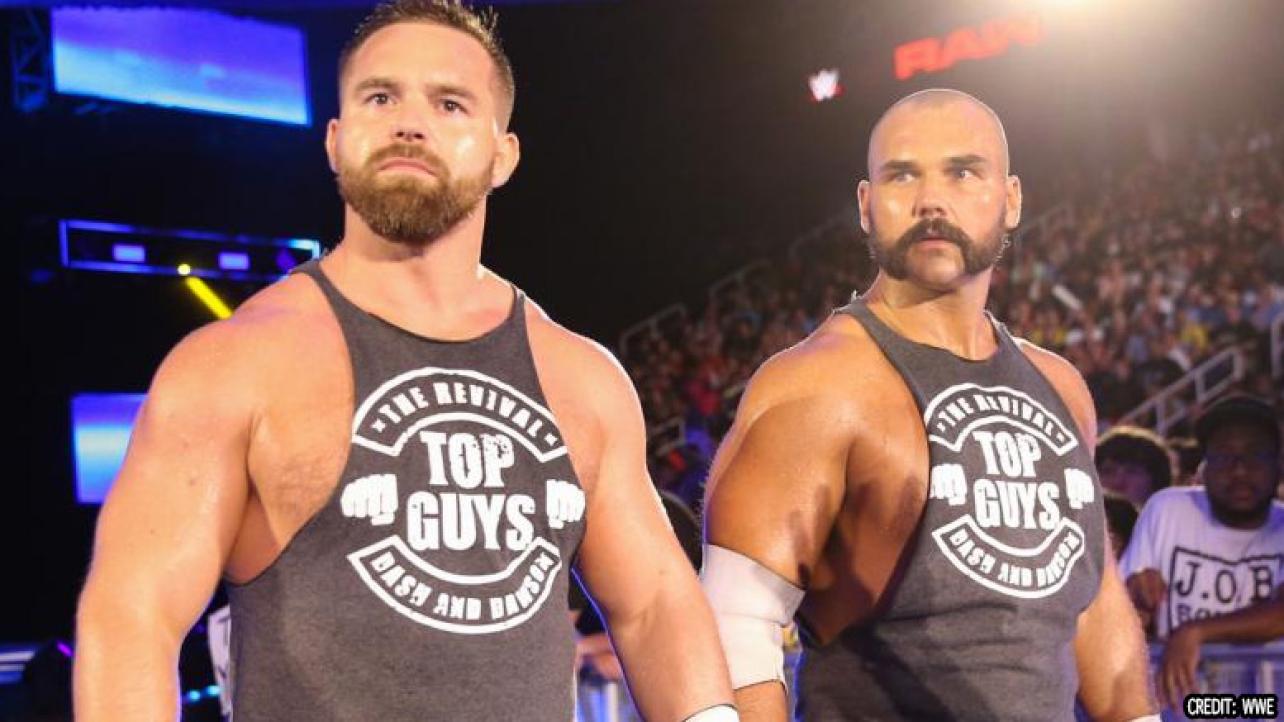 The Revival Confirm ‘Comedy Act’ Gimmick in WWE; Claim They Were Offered $750,000+

The Revolt, formerly known as The Revival in WWE, appeared as guests on Chris Jericho’s “Talk Is Jericho” podcast to shed some light on their recent WWE departures, as well as their highly-publicized negotiations behind-the-scenes with Vince McMahon and the company.

Featured below are some of the highlights of Dash Wilder and Scott Dawson’s appearance on the former AEW World Champion’s weekly podcast .

The Revival talking about the tag team division: “Long term, there is just not enough attention paid to the tag team division because there are so many good tag teams there all the time that I think can contribute so much more…We are not happy. The tag team titles don’t mean anything. Nothing against Brawn (Strowman), Brawn is a great guy and I get along with him very well, but he steamrolled the entire tag team division and then a 10 year old won the tag titles at WrestleMania. Then no tag teams were featured at SummerSlam until the last minute they added the women’s tag titles. When we sked for our release in January, we went straight to the top and asked for it. I think initially they thought we were bluffing and they said we were planning on putting the tag titles on you. We are planning on giving you this big run and Daniel said, it is not about the tag belts. We want the whole division to be featured and everyone to get an opportunity to work. They initially said they will give us our release. We went to the talent relations office. They said you can have your release, and I am not kidding you, as soon as we walked out of that talent relations office, everyone knew. I don’t know how but everyone knew we asked for it. We were getting texts from everybody. Right after that, we were getting tagged on twitter that we were complaining and being crybabies. I dare you to ask any of our coworkers if we ever complained.”

The Revival on meeting with Vince McMahon with new gimmick to stay: “There were multiple different versions of their vision for what they wanted to do for us. The pictures have leaked online. They are 100% legit. They were handed to us by Vince McMahon himself. I can tell you with 100% certainty that the boys are not the ones leaking out most of the information. Those photos had to have come from someone from creative who came up with that costume. We told them these are bad. These are not good, but we will do these until our contracts expire. We will do whatever you want. We will give it 100% and go all in and have fun with it, but when our contracts expire, we are done. There is no way that we are going to be staying here past June. We got a phone call saying we have been pulled from everything going forward. I don’t know if because we agreed to do it, it lost some of its hilarity to them. The numbers that have been reported contract wise, $750,000 per year, the number was higher than that. They offered more than that for us to do the clown cat in the hat.”

(H/T to Chris Siggia & rajah.com for transcribing above quotes. Please send all feedback to: jspodcast2020@gmail.com or @wrestlingfancs.)

The Revival Confirm ‘Comedy Act’ Gimmick in WWE; Claim They Were Offered $750,000+