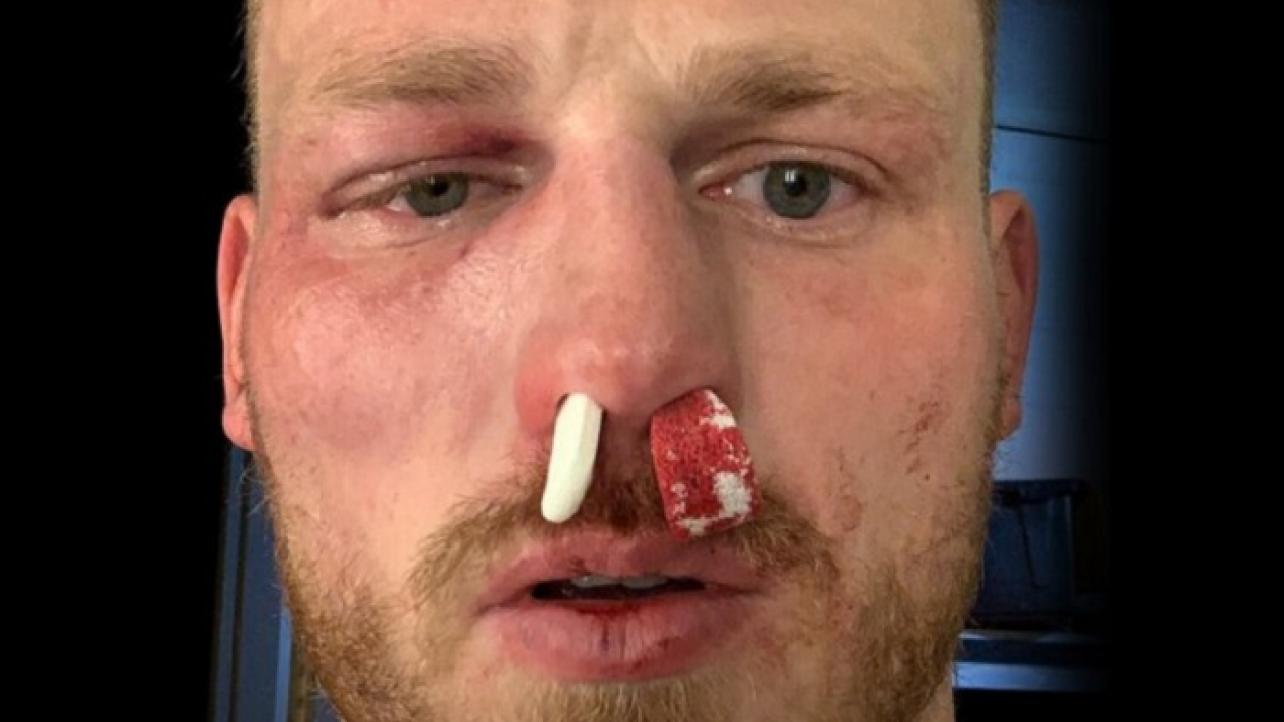 Not only was the final match scheduled for WWE Day 1 changed at the last minute on Saturday evening, the first bout of the evening was as well.

As seen during the WWE Day 1 Kickoff Show, Ridge Holland suffered an injury in the early moments of the match, resulting in him being taken to the back to receive medical attention while Sheamus continued the originally scheduled tag-team contest as a two-on-one handicap match.

“The Celtic Warrior” would go on to secure the victory despite the two-on-one disadvantage, connecting with a Brogue Kick and scoring the pin fall victory.

During the closing moments of the pre-show match, the commentary duo of Michael Cole and Pat McAfee checked in with updates on Holland’s status, noting that when Cesaro flipped his partner Ricochet onto Holland for a splash, he ended up flipping all the way around and smashing Holland’s nose with the flat-bottom of his boot.

Cole and McAfee would speculate that Holland’s nose was busted soon after the botched spot. They checked in later in the match with an official update from the backstage area where it was discovered that Holland did, in fact, suffer a broken nose.

Later in the evening, WWE provided an update on the injury status of Holland on their various social media outlets. On their official Twitter feed, WWE shared a photo of Holland’s face after he was worked on by the medical team backstage.

The caption to the photo read, “INJURY UPDATE: Ridge Holland suffered a broken nose in his match tonight at WWE Day 1.” Check out the tweet and the close-up photo of Ridge Holland’s broken nose via the tweet embedded below courtesy of the official Twitter page of WWE.

Also embedded below are some fan-shared video clips and GIF images that shows the actual spot where Cesaro flipped Ricochet right onto the snout of Holland.

.#WWEDay1 UPDATE: #RidgeHolland broken nose confirmed by #WWE with backstage #PHOTO + *EXCLUSIVE* #PHOTOS of doctors and medical staff tending to him at ringside and near the top of entrance way as #WWEDayOne pre-show match continued (#MUSTSEE)

This was ugly for Ridge Holland.