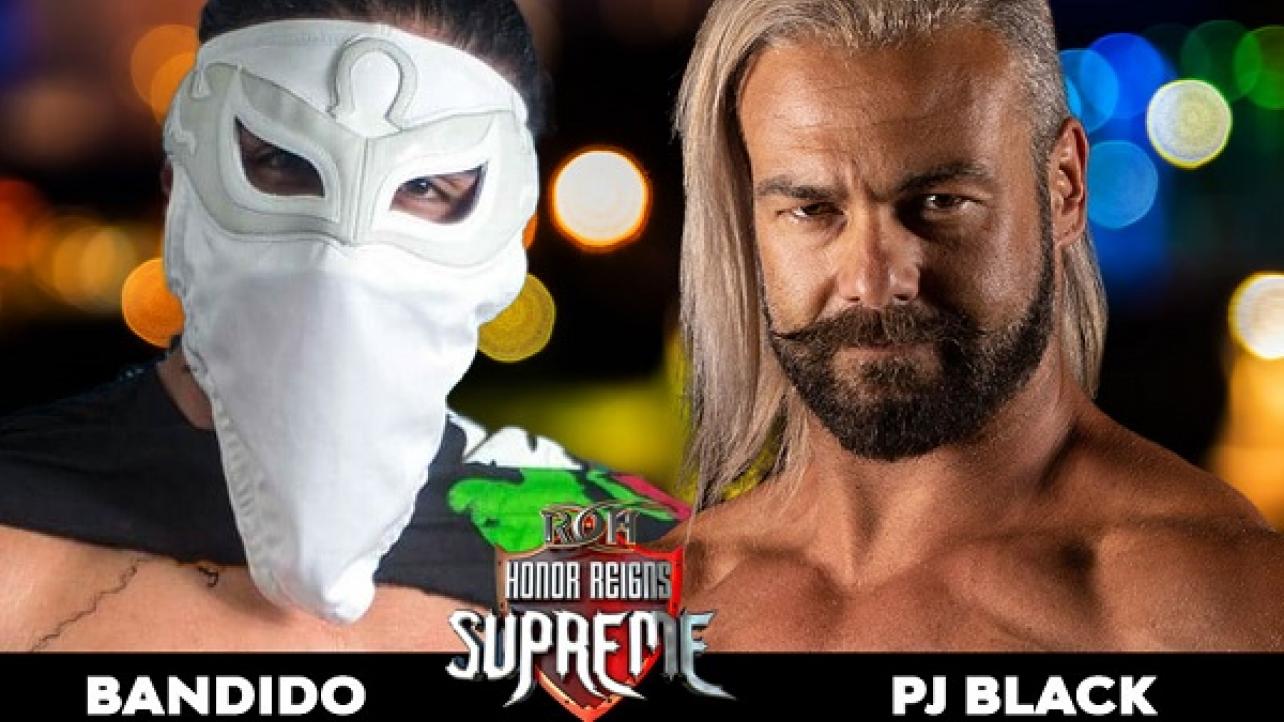 ROH has announced another match for their upcoming Honor Reigns Supreme event.

One of Bandido’s first matches for the promotion will be against PJ Black, a.k.a. Justin Gabriel, at the show, which goes down from the Cabarrus Arena in Concord, North Carolina on Sunday, January 13th, airing live on Honor Club.

Featured below is the updated lineup and official announcement from ROHWrestling.com:

The Best Wrestling on the Planet returns to Concord, N.C., on Sunday, Jan. 13 for Honor Reigns Supreme at Cabarrus Arena. The top stars in Ring of Honor will do battle on a can’t-miss show that will be streamed live worldwide for HonorClub.

All roads lead to the G1 Supercard, co-promoted by ROH and New Japan Pro-Wrestling, at sold-out Madison Square Garden on April 6, 2019, and the happenings in Concord undoubtedly will have an impact on the historic show.

Bandido was the fastest rising star in professional wrestling in 2018, going from spectacular but relatively unknown athlete from Mexico to international star headlining the All In event seen on HonorClub! Bandido has signed an exclusive ROH contract and now HonorClub will get to see much more of this high flying athlete, including a first-time match-up against a man who has competed in 63 countries and 48 states, PJ Black, in Concord!

BANDIDO vs. “THE DAREWOLF” PJ BLACK

Bandido was the talk of the professional wrestling world when he went from relative unknown to main event of the biggest independent wrestling event of all time. A fourth-generation wrestler, Bandido has made a name for himself around the globe. In addition to wrestling in his native Mexico, the 23-year-old luchador has competed extensively in Japan as well as the UK, Australia and on U.S. independents, most notably Pro Wrestling Guerrilla.

In September, Bandido competed in PWG’s Battle of Los Angeles and advanced to the finals, where he was defeated by current ROH World Television Champion Jeff Cobb. Earlier that month, he teamed with fellow masked stars Rey Mysterio and Fenix against The Golden Elite (The Young Bucks and Kota Ibushi) in the main event of the All In pay-per-view.

But while Bandido has seen his stock rise rapidly, he faces an opponent who has been competing globally since the age of 16, a man who left everything in South Africa to pursue and obtain international superstardom in “The Darewolf” PJ Black!

Black has competed in main events all over the globe, wrestling in more countries, 63, than just about any other wrestler and in nearly every state, 48. Black’s rise to the top in some ways mirrored Bandido’s but now both are in ROH, looking to climb the Championship ladders!