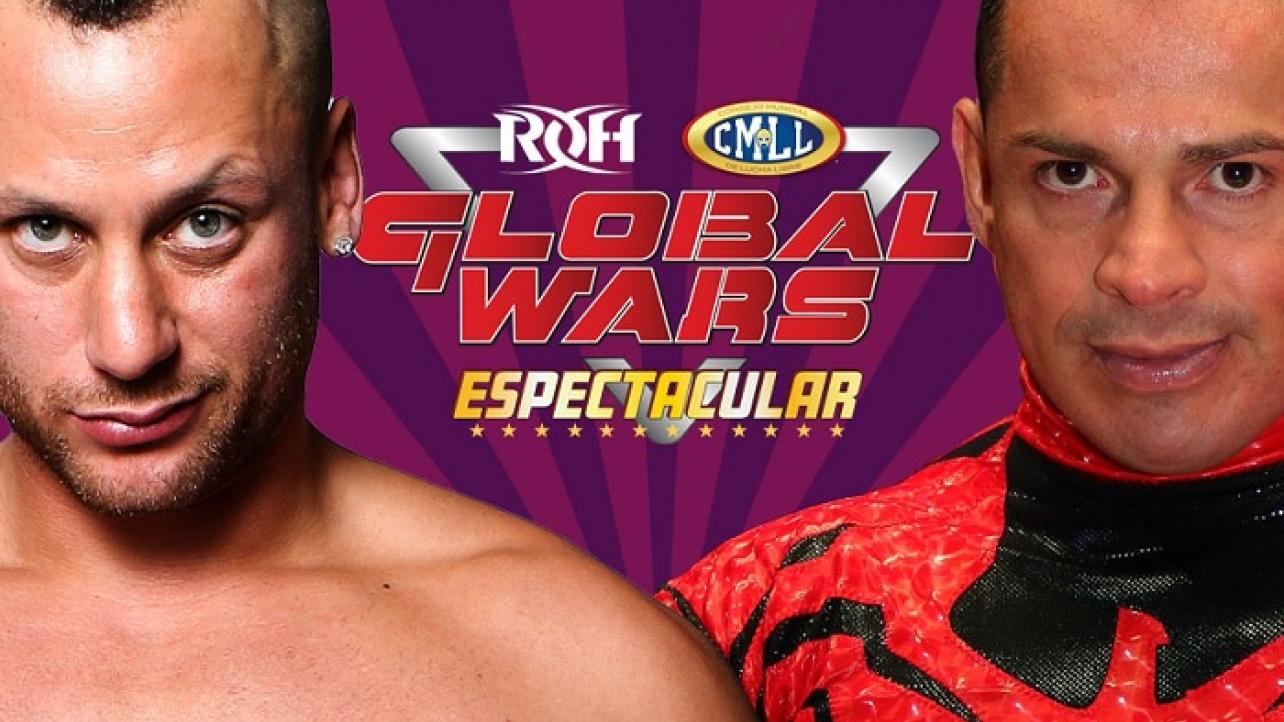 The promotions both announced today that ROH World Champion Matt Taven will be defending his title against Volador Jr. at the show in Villa Park, Illinois on Saturday, September 7th.

ROHWrestling.com released the following story today about the news:

The last time ROH World Champion Matt Taven was pinned in a singles match was Aug. 3, 2018. On that night, he was pinned by CMLL star Volador Jr. — twice — in a two-out-of-three falls match in Mexico City in which Volador Jr. regained the NWA World Historic Welterweight Title.

Now Taven will put his ROH World Title on the line against Volador Jr. on the Global Wars Espectacular show in Chicago on Sept. 7.

Taven and Volador have a storied history together in CMLL, where they have been both friends and foes.

In March 2018, Taven defeated Volador Jr. in a two-out-of-three falls match to become the first American to win the NWA World Historic Welterweight Championship. When Volador Jr. regained the title from Taven five months later, Taven — in a rare display of sportsmanship — congratulated the new champion. In an even bigger surprise, Taven then saved Volador Jr. from a sneak attack by RUSH.

From there, Taven and Volador Jr. became frequent partners in trios matches. In the main event at CMLL’s 85th Anniversary Show last September, they faced RUSH and Barbaro Cavernario in a Hair vs. Hair Match. A miscommunication between Taven and Volador Jr. led to them losing the match — and their hair.

As soon as the match was over, an incensed Taven nailed Volador Jr. with a knee to the face and then proceeded to taunt him. After Taven raised the hands of RUSH and Cavernario, he made a hasty retreat from the ring in an attempt to avoid having his hair cut. However, Volador Jr. recovered and took off after him. Volador Jr. caught Taven on the stage and dragged him back to the ring.

As Volador Jr. held Taven down, the CMLL barber cut off some of Taven’s long locks. After Taven scampered away, Volador Jr. honored the stipulation by allowing his long hair to be cut and shaved off. The rest of Taven’s hair was shaved off backstage.

Taven also made off with Volador Jr.’s NWA World Historic Welterweight belt. He showed up with the belt around his waist at CMLL’s International Grand Prix the following month, but Volador Jr. tackled him and retrieved his property. That was the last interaction between the two of them.

Since winning the ROH World Title in April, Taven has been nothing short of impressive, but could Volador Jr. be the man who has his number? Will Volador Jr. make history by becoming the first Mexican-born ROH World Champion?

Join us live in person or streaming for HonorClub to find out!