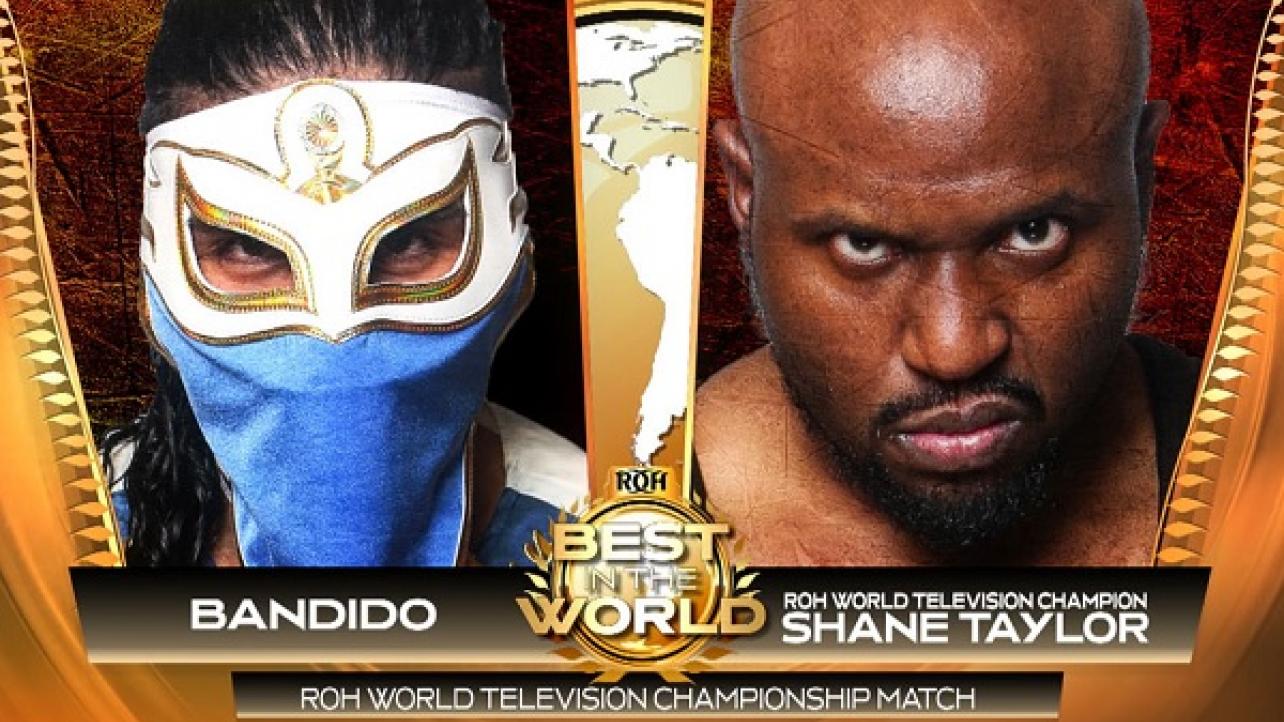 We have our Television Championship match signed, sealed and ready to be delivered at the ROH Best In The World pay-per-view in Baltimore, Maryland on Friday, June 28th.

Ring Of Honor announced that Bandido will be challenging current title-holder Shane Taylor for the ROH Television Championship at the 6/28 PPV, which emanates from the UMBC Event Center.

Bandido had future champion written all over him from the second he stepped foot in an ROH ring in January, and he will get his first opportunity to win gold in ROH when he challenges for the World Television Title at the Best in the World pay-per-view on June 28 at Baltimore’s UMBC Event Center.

Bandido, who is in Japan at the moment competing in the Best of the Super Juniors tournament, will face current champion Shane Taylor or whoever is the champion at that time. The 24-year-old luchador earned the title shot by defeating Taylor on a recent episode of “Ring of Honor Wrestling.” That match actually took place prior to Taylor capturing the ROH World Television Title in a Four Corner Survival Match on May 9 at the War of the Worlds tour stop in Toronto.

In addition to his victory over Taylor, Bandido has defeated other established stars such as Silas Young, Rocky Romero, PJ Black, and fellow LifeBlood member Mark Haskins.

While Bandido’s arrival in ROH created a huge buzz and he immediately became one of the promotion’s most popular stars, Taylor has long been vocal about being overlooked by ROH officials and fans.

Taylor’s rise has been more gradual, but no one ever doubted how dangerous of a competitor the big man from the mean streets of East Cleveland is. Possessing a devastating right hand, a nasty attitude and a huge chip on his shoulder, Taylor has vowed to force everyone in ROH to call him “the baddest champion you’ve ever seen, boy!”

At first glance, Bandido versus Taylor appears to pit speed and agility against size and power, but Bandido is much stronger than his 5-foot-7, 183-pound frame would suggest, and Taylor is incredibly agile for a 356-pounder.

Will Bandido win his first title in ROH? Or is Taylor’s reign of terror just getting started? Join us live in Baltimore to find out!