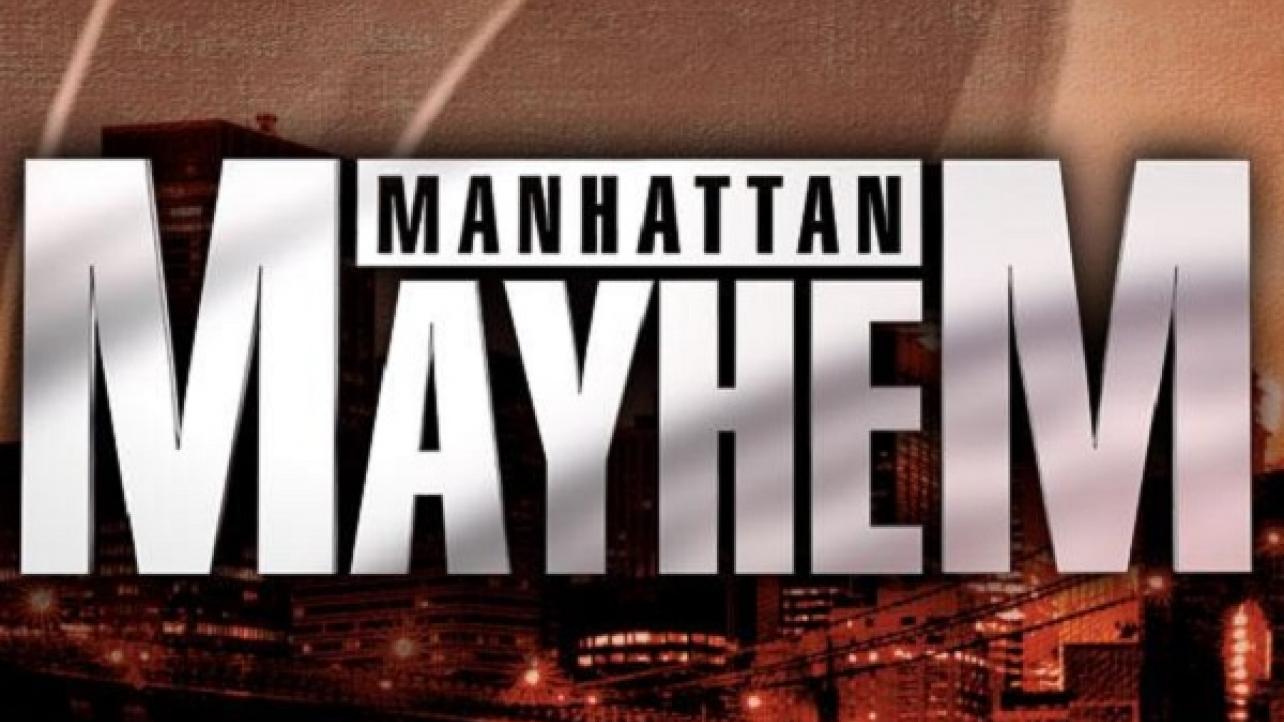 As noted, Ring Of Honor (ROH) held their ROH: Manhattan Mayhem VII event at the Hammerstein Ballroom in New York City on Saturday. Featured below, courtesy of Bryan Rose and F4WOnline.com, are complete results of the show.

Bully Ray came out to start the show, hyping up the crowd. Said there were would be professional wrestling tonight and not sports entertainment.

They announced at the start of the show that the main event has been changed. It will now be Bullet Club vs. The Kingdom (who are replacing SoCal Uncensored) & Shane Taylor.

This was a solid bout, mostly quick action between the three teams. The Dawgs were arguing with one another when the Briscoes jump then. Jay struck Will Ferrara with the Jay Driller for the win. how on Friday.

The Briscoes cut a heel promo with Jay saying they’ll do whatever the hell they want, this is their house and everyone here can go to hell. Mark says they’ll become the 9 time tag team champions. Chris Sabin, who was doing commentary, came out to the stage and posed with the title.

This was a good match, but the crowd was largely dead for it. They built a hot tag to Tenille as she finally came in and cleared house. She got some near falls on Sakai until she hit her new finisher, a running knee called the Spotlight, for the win.

Commentators said that Soberano had literally just arrived in the building. This was a total styles clash and not in a good way, as there were a ton of missed moves. Martinez is also doing the monster gimmick so he didn’t sell for a lot of Soberano’s offense early. Martinez grabbed him off the apron and chokeslammed him for the win in a short, but pretty bad match. This did no favors for Soberano, who is normally a great talent in CMLL. Beyond me why they’d book this match with this layout and finish for someone coming in from CMLL.

Martinez powerbombed Soberano Jr. on the apron after the match for good measure.

They are now having a Q&A with Jonathan Gresham.

It was revealed that, in fact, fans voted for the stipulation that if Flip Gordon wins his match tonight, he’ll be booked for All In in September.

This ended up being a pretty good match. To me, in terms of a heel act Cody is above and beyond everyone else right now in terms of presence and knowing his character. He stalled before the match, yelling at the crowd for being on Team Kenny and called Gordon a flat earther. He told Brandy and Bury the Bear at ringside that that they were all leaving. Eventually, Cody came back in and they did start having a match. Brandi played possum by pretending to take a bump early, so when Flip had his back turned she grabbed him, allowing Cody to strike him for the heat.

Flip came back with a dive and was going for another when Cody caught him on the top rope and attempted a superplex. Flip, well, flipped over him and hit a variation of the cheeky nandos kick Will Ospreay is known for. Cody came back with a moonsault and spiked him with the crossroads. Instead of pinning him, Cody motions that he’s going for another moonsault. He misses, allowing Flip to hit a 450 splash, but Cody kicks out.

Brandi went to the apron to confront Flip. Cody went for the disaster kick but Flip ducked and instead struck Brandi. Flip and Cody argued as Flip started to fight back, but Cody cut him off and hit the crossroads again for the win. This means Flip is still not booked for All In.

Caprice Coleman came out for his talk show, Coleman’s Culpit. He revealed that fans voted for Colt Cabana to come on the show. The Kingdom cut Cabana off as he was about to join Coleman and cut a promo running down SoCal Uncensored and hyped up tonight’s main event.

This was solid, it told a nice story. I thought the spots between the big men (Milonas and Bruiser) and Cheeseburger were pretty good. Cheeseburger is a substitute for Baretta, who tore his pectoral and triceps muscles a few weeks ago and is out for the foreseeable future. He and Chucky T’s team are apparently called Chucky Cheese.

Kenny King and Silas Young had a good exchange early. Milonas and Bruiser worked on Cheeseburger. King made the hot tag. Cheeseburger went for a dive but Young smacked him. King followed through instead did a dive on Silas as they brawled to the back. The two big guys were in the ring with the miniscule Cheeseburger. Milonas took Cheeseburger to the top rope and launched off with a superplex, then Beer City Bruiser followed with the frog splash, in a tandem move they call the Last Call for the win.

This was a great match. Castle and Lethal started things off, then Volador and Guerrero went at it. The latter two looked great. This turned into a really good match; Ultimo Guerrero knows exactly how to get a crowd into a match and Lethal did some great dives. He took out Castle and the Boys on the outside with a suicide dive at one point. Lots of frentic back and forth action. Lethal went for the Lethal Injection on Volador but he blocked it, allowing Castle and Ultimo Guerrero to at it. Volador stepped in and scored the win for his team with the Volador spiral on Guerrero.

An absolutely crazy match, full of wild dives, crazy spots and a hot crowd. It’s your usual great Young Bucks/Bullet Club match where they put out all the stops, and people were super into it as a result.

So an Ultimate Mayhem match is akin to a War Games match in that two men start the match, with more coming in as time progresses and a winner can only be determined when all eight men are in the ring. There’s no rules beyond that, so there were a lot of weapons used during the bout.

Taven and Scurll started things off for their team. The Kingdom won the coin toss, with Vinny Marseglia coming in from what may have been under the ring. Matt Jackson came out not too long after that to even the odds, wiping out Taven with a dive off the stairs, ran to the ring and took out Marseglia with a dive to the floor. TK O’Ryan came in next, masquerading as a Bullet Club fan. He took out Matt Jackson with a trash can and was being escorted out when he revealed himself.

Nick Jackson entered the match next and was able to take out The Kingdom on his own. Matt joined in as the two continued to dominate. Matt put Marseglia through a table with an elbow. Shane Taylor came in and cleaned house on the Bullet Club. He got a table and was setting it up as Hangman Page came out with a steel chair and started whalloping people with it. He took out the Kingdon and Taylor on the outside with moonsaults, then the Young Bucks followed, then a hesitant Marty Scurll pulled one off as well.

Hangman Page went to the balcony and did an amazing dive off the balcony to the floor, wiping out pretty much anyone who could catch him. He met Shane Taylor in the ring and tried for the Rites of Passage but couldn’t get it. The Young Bucks came in and started to wipe people out with superkicks. Marseglia put Page through a table as the Kingdom started to get their heat back. So much crazy stuff going on, including a shooting star Indytaker and another Indytaker on the outside. O’Ryan was put through a table as well. Nick Jackson jumped off the top rope to the outside with a 450 splash, taking out Shane Taylor who was, you guessed it, on a table.

O’Ryan was put back in the ring, where Hangman Page grabbed him and finished him with the Rites of Passage for the win. Overall, a pretty good show with the top two matches delivering.