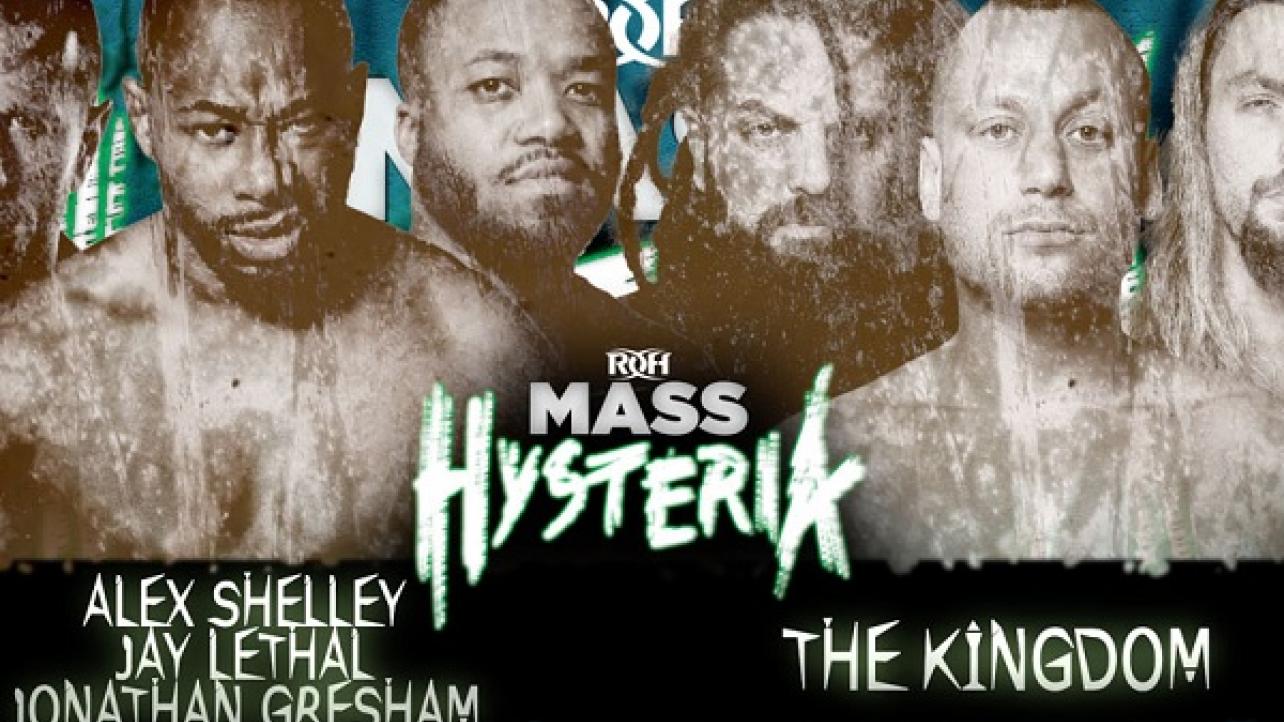 The following report comes from F4WOnline.com:

ROH was at the Lowell Memorial Auditorium in Lowell, Massachusetts on Sunday night for their Mass Hysteria broadcast streamed live on HonorClub. Ian Riccaboni, Colt Cabana, and Caprice Coleman were the announce team for the night. The balcony was almost entirely empty in the establishing shot at the top of the show.

Riccaboni announced that both Flip Gordon and Brody King were injured and were not allowed to compete tonight. The main event instead would be The Kingdom vs. Jay Lethal, Jonathan Gresham and the returning Alex Shelley.

No handshake beforehand. Where’s the honor anymore? The Bouncers shoved The Briscoes and said they wanted “a fight.” They were on the floor within seconds. Bruiser did a running somersault senton onto Jay Briscoe, then ran off a different side of the apron and blockbustered Milonas. Mark did a chair-assisted tope after that, similar to how Sabu does his dives.

Milonas did a big swinging Bossman slam that livened up the crowd. Milonas is from New England, so I imagine he had a good pocket of fans there supporting him. He followed up with a stinkface.

Beer City Bruiser did a running hip attack but completely missed Jay in the bottom turnbuckle. The camera caught all of Bruiser’s behind hitting the second turnbuckle and none of Jay. Later, Bruiser did the biting spot he does in every match and screamed “I ain’t got no teeth!” at the ref. I don’t think many in the crowd got it.

I don’t know what happened midway through but Milonas put Jay Briscoe in a bear hug and then fell forward and dropped him. I guess it was a spinebuster, but it looked awful. Milonas then crushed Jay with an Earthquake splash that didn’t look fun for Jay at all. Jesus. Colt Cabana sounded floored.

Mark Briscoe hit a Froggy Bow a few minutes later and that was that. The Briscoes were solid but the match itself not so much. They all drank beer in the ring afterwards.

– The lights went out and the Guerrillas of Destiny’s music started playing. Guerrillas of Destiny came out and ambushed The Briscoes from behind with the IWGP Tag Team belts. Both Briscoes were bleeding from this and Tama Tonga called Jay “Chicken Little.” He was particularly great here. Riccaboni teased a rematch on commentary.

This was pretty good. ROH is preparing for their Top Prospect Tournament and showcased these two.

These were two local wrestlers from Beyond Wrestling and other New England promotions. Silberkleit was “Human Thrill Ride” Jimmy Preston’s manager and he screamed a lot. He did the “I’m rich and you’re poor” gimmick and said Preston was a seven-figure superstar. Preston called himself a “meat missile.” Part of the crowd knew his catchphrases.

Casanova was impressive and did some innovative flying moves, like a backwards springboard leg drop at one point and some interesting capoeira-esque kicks. Preston took the second part of this match and looked solid. He’s very athletic and all of his strikes and power spots looked crisp.

When Casanova did La Mistica, Riccaboni and Coleman started singing “Dirty Diana” by Michael Jackson. So I guess Casanova’s version of the move is called that. He flew halfway across the ring with a flying guillotine leg drop. Silberkleit tried to interfere, but he didn’t make it through the ropes in time. Casanova got the win.

Black did some really impressive moves in this, but I couldn’t pick up much story. Young made fun of people at ringside and kept referring to himself as a technical wrestler. Black did a springboard 450 and landed on his feet. Young later used Misery (a TKO) to win the match and end Black’s mini-win streak from last month.

Satisfactory match with paint-by-numbers booking. This felt like ROH was cramming as much Women of Honor content into 10–15 minutes as possible.

Women of Honor World Champion Kelly Klein was on commentary for this match. Before the bell, Velvet Sky told ring announcer Bobby Cruise that he sucked and to get out of the ring, then said “Go Yankees!” like Bully Ray usually does. The crowd started shouting “What?” after everything she said.

Love got on the mic and said Steelz stole the number one contender’s match in Philadelphia. Love insisted on Steelz putting her title shot on the line in this match and Steelz agreed and even called her a “puta.” I guess that also meant that Rivera got an opportunity at the spot.

Rivera took out both wrestlers when they were jaw-jacking. Riccaboni mentioned that her father was actually an ex-WWWF wrestler in the 70s. Love later did a jumping flatliner then locked in a Koji Clutch, but seconds later she was up doing a springboard bulldog to Rivera.

They all did a Tower of Doom at one point that got zero reaction. After Love landed a Botox Injection kick on Rivera, Steelz threw Love out of the ring and did a cutter to win the match.

Velvet Sky came into the ring and sprayed Steelz and Rivera with perfume and Love kicked them. Klein came out and chased The Allure. Klein gave Steelz a hard handshake until the lights went out again and Maria Manic came out. Coleman kept singing “Maneater” by Hall & Oates.

Manic took out Rivera until Sumie Sakai tried to save her, but Manic took her out too, then Manic laid out some male staff members. The crowd liked her.

Decent match with a really weak finish. King stalled early on and said “Yo soy el luchador” into the camera. Lee did the Tranquilo pose. They traded really hard chops. Things heated up when the action spilled to the floor and King threw Lee over the barricade into the crowd and Lee crash landed into the front row.

King asked if the fan was okay and he no-sold it. Not sure if that was the intent of the spot but it looked cool, and if no one got hurt then all the better.

The crowd was quiet until Dragon Lee started flying to the floor and into King feet-first with the Shibata dropkick in the corner. He was twice as explosive as King in this. They had a chop-off and really laid into each other with them.

King hit what I think was one of the best spinebusters of his life after this — and I think it’s because of how fast Dragon Lee ran into it. The crowd started banging on the barricades after this.

King got caught up trying to do something to Lee on the top rope, so Lee was able to land the flying double stomp as King hung in a tree of woe.

Timekeeper Amy Rose, who was King’s assistant when he was “blinded” by The Great Muta’s mist in MSG, distracted Lee as he went for a running knee. While Lee was looking in Rose’s direction, King caught him with a kick and then landed the Royal Flush to win. People booed and most of the air left the room.

King got on the mic and said he was going to CMLL next month.

These two are very underrated. This wasn’t perfect, but it was still very good and real hard-hitting.

Isom dropkicked Taylor to the floor early and tried a pescado, but Taylor caught him. Isom sent him into the ring post and then did a suicide dive through the ropes. He tried doing another one, but Taylor countered and did a draping DDT from the apron onto the floor.

Back in the ring, Taylor laid in a ton of hard chops. The crowd would dip in and out of this. Taylor’s punches look great and Isom sold one of them like he was out on his feet and fell through the ropes.

The first “holy sh*t” chants of the night came when Taylor hip tossed Isom from the apron to the floor. It looked crazy. Isom eventually came back with a moonsault off the second rope and later lifted Taylor up into a fireman’s carry and landed a Kryptonite Krunch for a really close two count.

Taylor muscled his way back into the match and used a powerbomb, knee strike, and package piledriver for another extremely close near fall. Taylor spiked Isom with Greetings from 216 for the win. The crowd was on their feet for the finish. It was the best match of the night so far.

Since Flip Gordon and Brody King couldn’t wrestle tonight, ROH rearranged the card and put these four in a tag together. Scurll and Bandido were in first and had a smooth exchange that was more of a tease than anything. Haskins then talked some smack to PCO until things went to the floor, where Scurll superkicked Haskins from the apron with an assist from PCO.

Fans loved PCO in Lowell and chanted for him quite a bit. He did a running basement dropkick to Haskins. The stories here were clearly between Scurll & Bandido and PCO & Haskins. The crowd would stay quiet until wrestlers would pull off a cool spot, waiting for the GIF moments.

Haskins and Bandido tried some interesting double team moves, but not all of them landed — particularly that assisted standing-twisting moonsault-stomp thing.

PCO later tagged in and used a string of power moves on both Haskins and Bandido. He and Scurll did the Quebecers spot — a Boston Crab and guillotine leg drop from the second rope. Bandido later took a brutal half-nelson suplex from Scurll.

They tried doing the spot from Saturday night where Bandido was supposed to catch PCO mid-air from the ropes, but he fell over and did a powerslam instead. PCO essentially no-sold it so it didn’t look all that bad. All could be forgiven when Bandido did a top rope Spanish Fly to the 51-year-old.

Gordon distracted the ref and landed a cheap shot on Bandido, then sunk in the chicken wing for a quick tap. This was good.

They teased a redux of their MSG match with Rush hitting the Bull’s Horns early but instead just did a regular shotgun dropkick, then booted Castle in the face in the corner. Rush also did the spot that TK O’Ryan botched on Saturday, where Rush slingshotted himself over the ropes, landed on his feet and then did a surprise back kick.

Castle came back shortly after this and whipped Rush into the barricades on the floor and slammed him onto the apron.

Castle slowed things down for a while until Rush began cursing at him in Spanish. He threw a filled garbage bin at Castle on the floor. The crowd was way into Rush and cheered a lot when he threw a chair in the ring. Castle tried using the chair, but Rush punched him and it fell out of Castle’s hands.

Castle eventually used a blatant low blow and was disqualified. The crowd howled and groaned as Castle beat on Rush with a chair. What a heat killer.

Shelley looked great for someone who hasn’t wrestled in a year. He’s still in awesome shape and didn’t look to have all that much ring rust. He did a double single-leg crab to Marseglia and O’Ryan and later used the Paradise Lock on O’Ryan and dropkicked both O’Ryan and Marseglia, who were prone.

There was a part midway through where Lethal, Marseglia, and finally Taven did dives to the floor. Taven gets so much air on his tope. Marseglia sounded to have a good number of supporters in the crowd.

The match sort of heated up from this point. Lethal and Gresham did the Cornette Cutter for a two count. The announcers started to talk about how this was the best wrestling on the planet.

Lethal hit the Lethal Injection and dove to the floor before Shelley tapped O’Ryan with the Border City Stretch (Rings of Saturn) to win via submission.