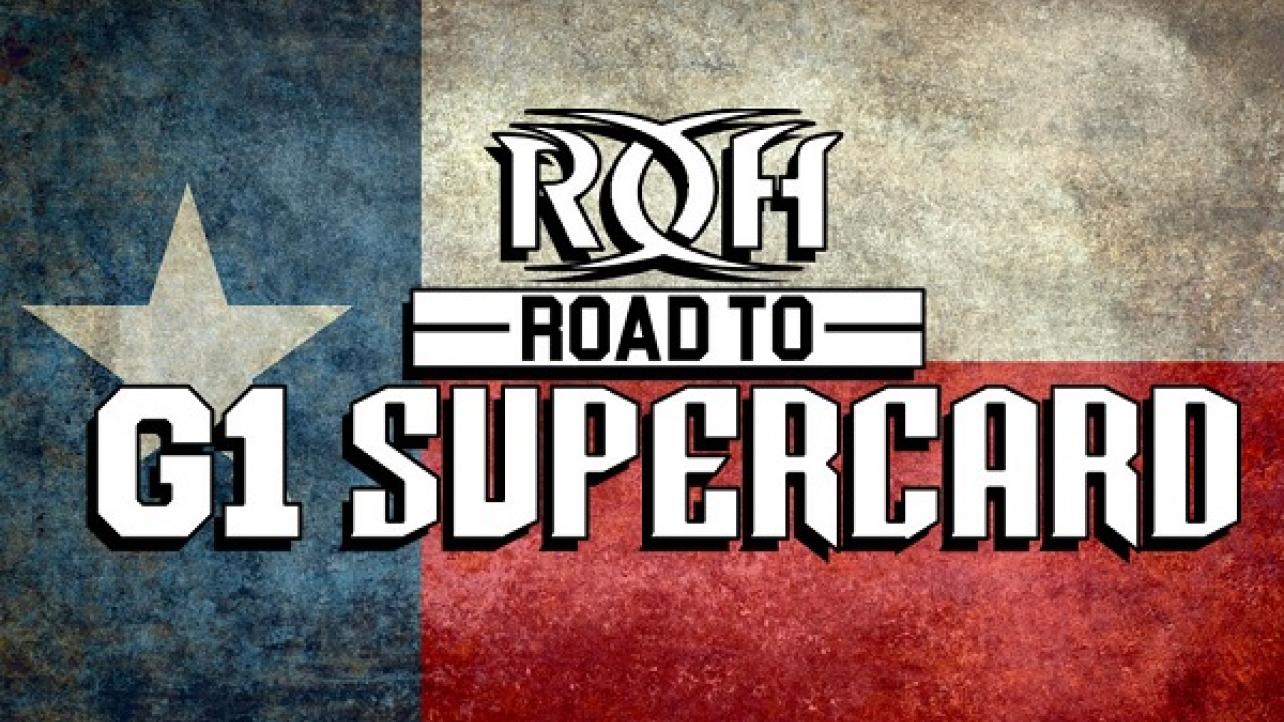 Ring Of Honor held their ROH: Road To G1 Supercard event at the NRG Arena, streaming live via the HonorClub digital subscription service on Friday. Featured below are complete results of the show from Jason Powell of ProWrestling.net.

Ian Riccaboni was on commentary and hosted the show with a variety of guest color commentators.

2. Twisted Sisterz defeated Madison Rayne and Sumie Sakai. Thunder Rosa rolled up Rayne and held her tights while getting the pin.

4. Marty Scurll, PCO, and Brody King defeated Clark Conners, Karl Fredericks, and Alex Coughlin. Scurll wore a t-shirt that read, “All My Friends Are Dead”. Conners took a series of moves from the Villain Enterprises trio that concluded with PCO performing a moonsault and pinning him.

5. TK O’Ryan (w/Matt Taven) over Jonathan Gresham. Taven was scheduled to face Gresham, but he cut a promo before the match and complained about having to face “a little Melvin like you.” He claimed that he defends his real world title against people who deserve it and questioned why Jay Lethal’s “young boy” would challenge for the title if Lethal actually held the real title. O’Ryan said he would take the match in order to make Gresham prove himself. Taven sat in on commentary. Late in the match, Gresham applied the octopus hold, but Vinny Marseglia appeared and distracted referee Paul Turner from seeing O’Ryan tap out. O’Ryan ended up pinning Gresham while using the ropes for leverage. Marseglia and O’Ryan put the boots to Gresham until Jay Lethal ran out and chased them from the ring. Lethal cut a promo and called for his title match with Marseglia to take place on the spot.

6. Jay Lethal defeated Vinny Marseglia to retain the ROH Title. Lethal hit a Lethal Injection and scored the pin. Gresham took out O’Ryan with a suicide dive after the match.

7. Kelly Klein defeated Dr. Britt Baker to retain the Women of Honor Championship. Mandy Leon sat in on commentary. Baker applied a late mandible claw, but Klein reached the ropes to break the hold. Klein came right back with a running knee to the head and applied The End of the Match submission hold for the win. After the match, Klein took the headset from Leon and told Sumie Sakai that she is “the road” on the way to G1 Supercard. Klein will defend the WOH Championship against Sakai on Saturday’s event.

8. MVP and Kenny King beat Colt Cabana and Willie Mack in a Tag Wars match. Riccaboni noted that Mack replaced Flip Gordon as Cabana’s partner. Mack wore his NWA National Championship to the ring. Riccaboni referred to King and MVP as Beatdown Klan and played up the surprise of MVP appearing. Cabana had some fun by dancing on the middle rope and doing MVP’s basketball show bit. He also spun an imaginary basketball on his finger and taking a shot only to have MVP reject the imaginary ball. Funny. MVP hit a late Playmaker on Mack, who kicked out of his finisher. Mack performed a double stunner and tagged out. A short time later, Mack performed a flip dive onto both opponents. Back in the ring, MVP hit Yakuza kicks on Mack and Cabana, then King performed a Royal Flush on Cabana and pinned him.

A graphic showed the updated Tag Wars brackets. Villain Enterprises vs. The Bouncers vs. Kenny King and MVP will be featured in one three-way semifinal match, while Coast 2 Coast vs. Juice Robinson and David Finlay vs. Jay Lethal and Kenny King will meet in the other on Saturday. The winning teams will meet in the finals later in the evening. The winning team will get a title shot at the anniversary show and a spot in the NWA Crockett Cup tournament.

9. Rocky Romero defeated ROH TV Champion Jeff Cobb and Dalton Castle (w/The Boys) in a Proving Ground match. In the end, Castle went for a Bangarang while Cobb was at ringside. Romero countered into an inside cradle and scored the pin to earn a future ROH TV Title match. Romero celebrated the big upset win. Romero went face to face with Cobb. Riccaboni noted that it was not an instant reward, meaning the title match would not take place on the spot. Castle shook the hands of both men while Riccaboni spoke about how frustrated he must be. Cobb held the title belt out, pointed at it. Romero said not now and went to ringside. Cobb offered Romero a fist bump through the ropes, which Romero accepted.

Riccaboni set up footage of from a forthcoming ROH television show that showed the formation of Lifeblood. Tenille Dashwood joined Riccaboni on commentary for the main event. Ring entrances for the main event took place. Bully Ray walked out before the opening bell. “No,” Riccaboni said. “Why is he here?” Riccaboni called Bully a quitter and a coward. Bully took a mic and said he would normally ask “Do you know who I am?” Instead, he asked if the Lifeblood members know who “we” are. He said they are the guys who got rid of the Bullet Club. Ray turned his attention to referee Todd Sinclair and accused him of screwing him over at Final Battle. “I never said I quit,” Ray said. Ray told Sinclair he was going to make the match a handicap match and started to threaten him when Juice Robinson took the mic away. Robinson said Ray thinks he’s a bully, but he wouldn’t bully an ROH referee and get his way. Robinson said Bully doesn’t call the shots, the people do. Robinson played to the crowd and asked if they wanted to see Lifeblood against the five heels. The crowd cheered and then Robinson asked Sinclair to make the match.

10. Bandido, Juice Robinson, David Finlay, Mark Haskins, Tracy Williams defeated Bully Ray, Silas Young, Shane Taylor, Jay Briscoe, and Mark Briscoe in a handicap match. Bully taunted Finlay while claiming that he used to beat his father. Later, with all the babyfaces down at ringside aside from legal man Robinson, Bandido limped to ringside while selling back pain. Sinclair made Bandido a legal entrant and allowed him to tag into the match. Late in the match, Williams superplexed Mark Briscoe onto a pile of wrestlers on the floor. In the ring, Robinson performed a spinebuster on Ray. Bandido followed up with a frogsplash and pinned Ray.