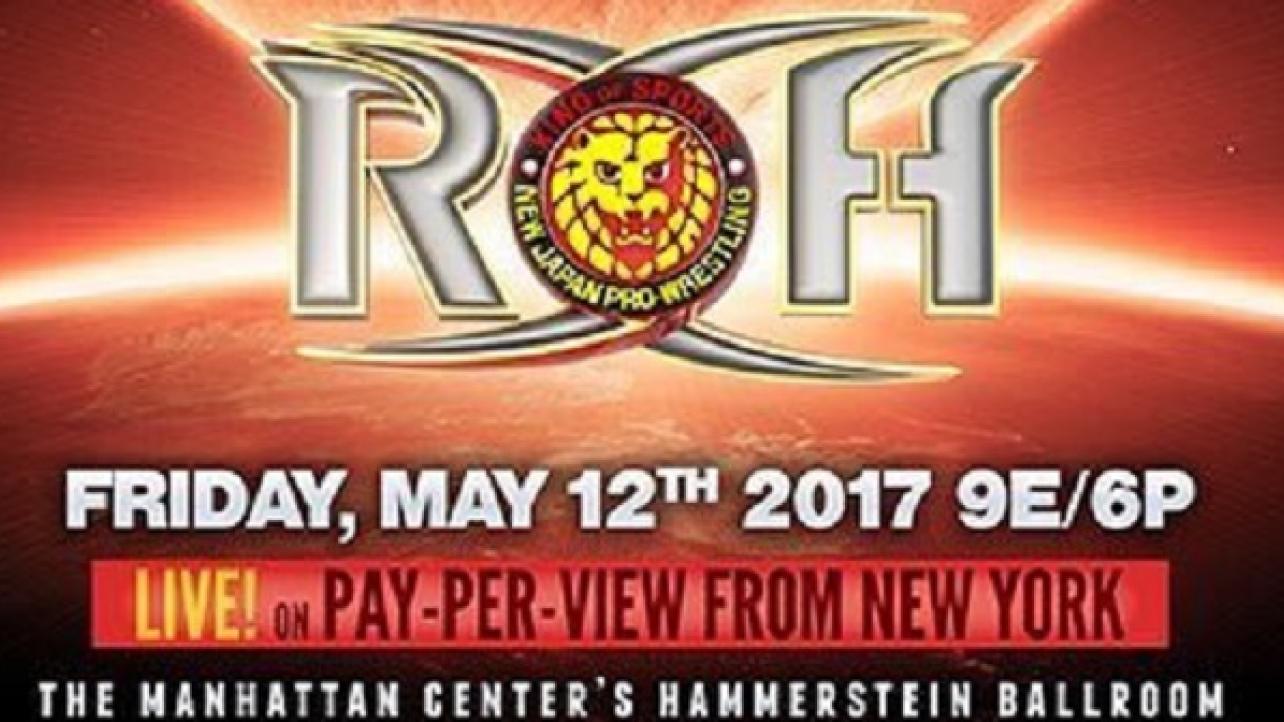 ROH: War Of The Worlds 2017 PPV Results From NYC

On Friday evening at the Hammerstein Ballroom in New York City, Ring Of Honor held their “ROH: War Of The Worlds 2017” pay-per-view.

Below are complete results of the show. The following report comes from Dave Meltzer of F4WOnnline.com.

KUSHIDA VS. BOBBY FISH VS. DALTON CASTLE VS. SILAS YOUNG

This was a fast match with everyone doing big moves and being broken up. Kushida and Castle were the most over. Castle pinned Fish clean after the bang-a-rang.

Another rushed match. Kazarian went for a sunset flip out of the corner but Page blocked it and held the ropes and got the pin. The match was hot while it lasted. There was a spot where Page spit in Kazarian’s face, Kazarian spit back, Page blew his nose on Kazarian, Kazarian spit in Page’s mouth, but actually go ton his chin and Page then grabbed the spit and ate it. Kazarian alsodid a dive and a slingshot into a diamond cutter.

This was another very good but rushed match. Really it was great while it lasted. Hanson powerslammed Sabin and did a tope on four guys and then Rowe pinned Sabin. Lots of dives. Rowe did a belly to belly overhead on Sabin & Gresham at the same time. Sanada is one of the most talented guys around. Everyone looked good here. Evil did the chair around the head and chair shot on Hanson.

WILL OSPREAY VS. JAY WHITE

This was one of the best mathes in North Ameria so far this year. Ospreay got the win after a springboard shooting star press to the floor and an Oscutter. Both got on their kneees and showed repect for each other. Fans gave them a few standing ovations. There was so much insanity here including Ospreay doing a space flying Tiger drop but White caught him and gave him a brainbuster on the apron. There were so many big spots you can’t even list them all but it was prefect timing, super hot crowd once they were about 8:00 or so in when the crowd realized how special this match was.

After the match Punishment Maritenz, gave Ospreay a kick and then choke slammed White. This was a good way to do this because people loved that match so much and how much they gave tghat it got Martinez real heat for attacking both. Martinez lost to White in Hopkins, MN so that was the reason.

Another really good match. This was no DQ and there were early dives byt he Briscoes. Lots of chair shots to the head, not brutal, but way too many and needless. Super fast paced. Bully was super over. The finish saw Bully power bomb Baretta off the middle ropes through a table after the Briscoes got the tables. The Briscoes then worked with Bully to do a 3D on Romero and got the pin. Bully and Goto did the Japanese trading of elbows in the middle in between all the chair shots that Mark and Baretta were taking. Baretta also did a great dive and Mark did a moonsault tothe floor, a blockbuster off the apron and elbow off the apron among his spots.

Another very good match. It was tough coming off those last two matches. Sydal did some cool huracanranas standing and jumping on the top rope and another coming off a suplex by Scurll. Of course Scurll’s big spot was the finger break. The finish saw Sydal go for the shooting star press, but Scurll go this knees up and then got the chicken wing for the submission.

Another very good match. It wasn’t as long as most Bucks title matches but all action. Bushi blew mist in Matt’s eyes but he superkicked Naito, Bushi, Nick and the ref. Naito did most of his stuff. He did the destino on Matt but Nick saved with a swanton. The finish saw Nick take out Naito with a springboard flip dive and they pinned Bushi with the Meltzer driver.

They talked about the U.S. title tournament and announced Jay Lethal as the first entrant. Hangman Page confornted him so he’ll be in as well.

They pushed this as one of the best champions in ROH history against the best champion in New Japan. Colt Cabana teased Cole leaving saying that Tanahashi was Cole’s dream match and maybe he’ll go somewhere else. They had a very good match, not the level of almost any Tanahashi match,but still good. The crowd was really into it and they did a good enough match but not a great match. Tanahashi won with a high fly flow.

The Bucks came out and teased superkickcing him but isead hugged him. They called this the curtain call. The lights then went out. Kenny Omega was on the screen. Omega made fun of the curtain call. Omega said he was disappointed at the Young Bucks. The same man who tired to fire you is being showered with adulation. Omega said to Cole that your tenure in Bullet Club and pro wreslting has been long and storied. In every fairy tail there has to be a hero and haves to be a villain. Omega was with Scurll. Omega fired him and they teased Scurll replacing him in Bullet Club. The lights went on and Scurll was in the ring with a Bullet Club umbrella. The Young Bucks then superkicked Cole and Scurll had a Bullet Club t-shirt. Scurll nailed Cole with a hard umbbrella shot and the Bucks both kissed Cole. They talked about how Cole poisoned Nick whcih was a storyline on Being the Elite.

CHRISTOPHER DANIELS VS. CODY VS. JAY LETHAL FOR ROH TITLE

Daniels retained the title. Cody had Lethal in the figure four and Daniels did the best moonsault ever on Cody and pinned him. Daniels had been taken out a minute earlier when Daniels knoked daneils off the apron through a table. Rhodes kicked out of the Lethal injection and then Lethal kicked out of crossroads. Lethal did a tope early where he hurt his knee but until very late when Rhodes used the figure our, and one dragon screw, nobody really worked on the knee. They pushed the idea that Daniels outsmarted everyone enroute to winnning. Shorter than most world title matches and it was fine. Really nothing on this show could touch with Ospreay match. They ended right at the three hour mark so to get all these matches on the show they had to rush everything.

ROH: War Of The Worlds 2017 PPV Results From NYC