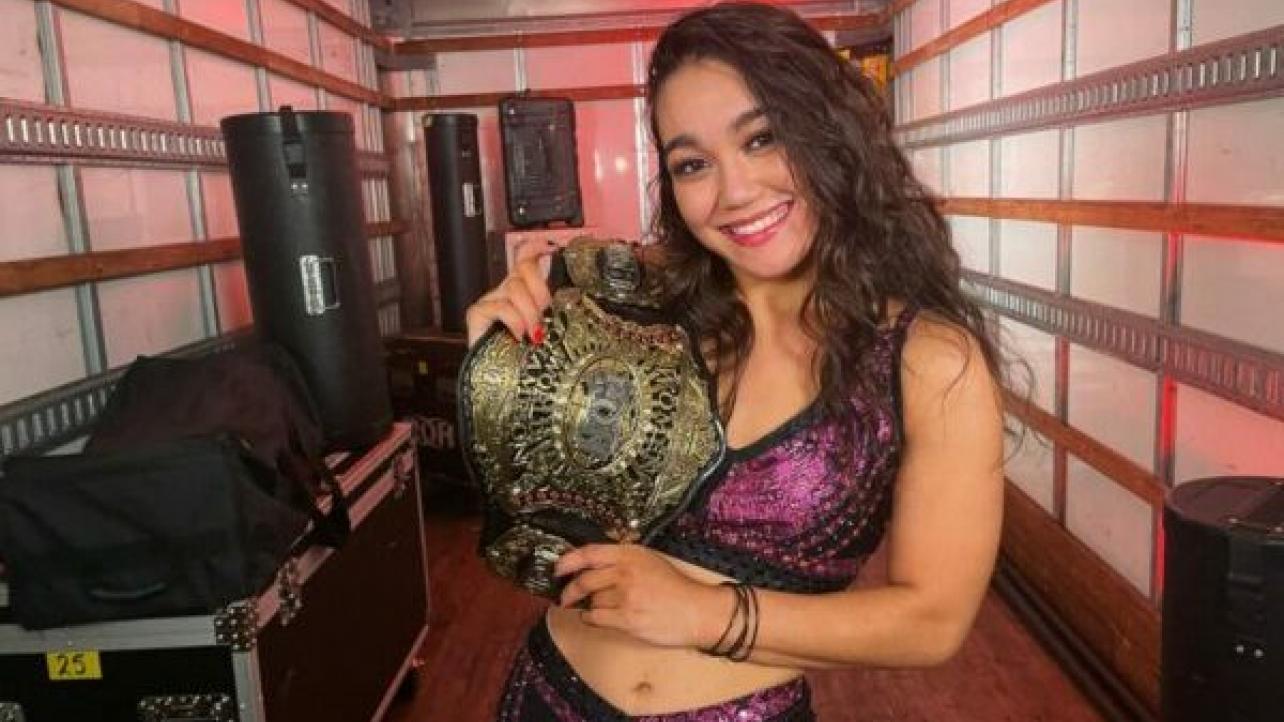 Rok-C recently appeared as a guest on the Wrestling Epicenter for an in-depth interview covering all things pro wrestling.

During her appearance on the show, Rok-C spoke about capturing the ROH Women’s Championship and more.

On being introduced as the ROH Women of Honor Champion: “It’s still a little weird to me sometimes. Like, it’s just, it’s a little crazy. Just because I wouldn’t have expected all this to happen at 19 years old! I always knew that I wanted to be a professional wrestler. But, to be the first Ring of Honor Women’s World Champion at 19? I would not have ever expected that!”

On how she got hooked on wrestling: “I was actually a fan of THe Rock for a long time because of his movies prior to me watching wrestling. There was this one time where The Rock was on WWE when my dad was flipping through the channels. I was like, “Wait! Really? That’s The Rock!” So I watched his segment. Then, I stay watching the rest of the show. I was hooked! My Uncles, they have always been avid fans of wrestling. They always had the pay-per-views on and Monday Night RAW and whatnot… So yeah, I ended up just starting to sit with them and watch along!”

On what female talent jumped out at her as a young fan: “Then I saw AJ Lee and she was like, the first Diva at the time that kind of caught my eye. Seeing the male wrestlers, I never really thought, “Oh, I could do that!” Then I saw her. She was tiny and too short and a tomboy. That represented what I was! I was like, “Oh, I can definitely do this!””

On her background in sports and performance: “I also grew up in theater and theater arts. And I think that that kind of caught my eye as well – The entertainment part of wrestling. Along the way, I just fell in love with the craft!”

On how her peers felt about her being in school and being a wrestling fan and then wrestler: “I actually kept it to myself for a while. I started training when I was in 8th grade. And When I was in elementary, school and I was like a fan of wrestling. I was kind of bullied for it a little bit. So I kind of went into to middle school and high school not really wanting to share that part of myself – Keep that to myself. But, I had some really close friends that I told and they were super supportive about it. Then, when I started breaking out a little bit more is when people just started finding out on their own and were kind of like, “Hey, you’re a wrestler?” They thought it was pretty cool! But uh, yeah, it was mostly just something that I kind of kept to myself.”

On if her parents were supportive of her decision to become a wrestler so young: “Yeah, super! My parents were also fans of wrestling so my mom like knows all the wrestlers and she would actually watch with me sometimes and my stepdad. He would take me to lthe wrestling shows. He actually took me to my first live event! As soon as I started watching Wrestling, I was like, “I’m gonna be a wrestler!” I told them and they were super supportive about it. I’m sure at a point they were kind of like, “She’ll grow out of it!” But no. I was so determined that I wanted to do this. I told my mom when I was like 11! I realized that there was a some local wrestling promotions. I had no idea what the Indies were. So, I found a local wrestling promotion that was in my hometown. My stepfather, one of his co workers was a wrestler. So, he started taking me to those shows. And when I was about like 11, I was like, “Mom, can I please like, can you please ask if I can start training?” She was like, “Okay!” She asked, and they were like, “Well, she’s a little too young. You should kind of put her into tumbling and cheerleading, gymnastics, that’ll kind of help her out.” That’s what I did. Then, when I turned 13, I asked my mom to ask again… And, she did! That’s when I started training. But I feel like my whole life, I’ve just been working towards becoming a professional wrestler!”

On the unique “Rok-C” name: “My mom actually came up with my ring name when I was like 10! I had this little journal where I would come up with signatures and gear and names and whatnot. And me and my mom were just like, coming up with random names. And I liked his name, Roxy. I was a huge fan of the Rock. So I kind of switched up the letters a little bit, and then I use the dash… The C stands for my name, Carla. It also stands for confidence, just because I feel like when I first started training and trying to break out into the business is really hard. Especially because you don’t see 1516 year olds being in the business, obviously. But I felt like I had as much heart as everybody else that was in the business. It brought my confidence a little down for a while. But I feel like in wrestling confidence is so important, something you kind of have to work towards. And I’m still working towards it to this day.”

On Booker T’s influence on her career thus far: “Booker T has been such a big help. I started training at Reality of Wrestling when I was about 16. And yeah, he’s been such a big help and Sharmell his wife.She’s awesome as well. And I think me being so young and kind of, I was getting on buses and traveling to Houston, which is like six hours away from my hometown. So I was traveling on buses and just going over that. I think being so young, really, I think Booker and Sharmell really helped because it wasn’t just like them helping me out with like, wrestling and training and whatnot. It was like they helped me become a better person. Booker has always been great. And, I feel like I’ve learned most of what I know from him.”

On beating frontrunner Angelina Love in the ROH Women’s Title Tournament: “Angelina is awesome. She’s a 7 time World Champion. And, she’s been wrestling longer than I’ve been alive! (laughs) That was a crazy full circle moment for me. I remember watching her on TV and then I found myself put in the ring with her. That was a lot of pressure. But, I remember when I was on the indies, I’d often face people with a lot of experience. Like, I remember when I was 17, I wrestled Jazz! Jazz is like… A legend! I didn’t pull out the win against Jazz, but I think that these experiences at a young age really helped me and shaped me.”

On the experience of winning the ROH Women’s Division Title in front of a live crowd at Death Before Dishonor: “Yeah. So during the show, Chris Hero was there to help. Help out agent and Maria, both of them, like came up to me and tell me, “Take in this moment. Soak it in. Look around. These moments don’t happen very often.” This was my second pay-per-view. My first was GLory by Honor and that was cool because that was my first experience on the Ring of Honor scene. (At Death Before Dishonor), I was in the back and they put on my promo and the crowd started chanting my name. I was like, “Why are they chanting my name!” My mom and my stepdad were there. That was so important to me because they were such an important part of this journey and they have been just so supportive of me. Without them, I woudln’t be Ring of Honor Women’s Champion at 19… Maybe eventually. But, not this young, not at 19 without their support. I am so grateful to them. And, to have that moment and to see my mom crying and seeing how proud they are of me was such a precious moment.”

On who is the biggest threat to her ROH Women’s Title: “I wouldn’t see it much as a threat but I do know that holding this championship means that I have a giant target on my back. But, I’m ready. Maria said it before I won the title… There really isn’t a door here. So, anyone that wants a shot at the title can get it. And now, it is like, I hope people aren’t underestimating me.”

On how women’s wrestling is so hot right now: “It is absolutely wild to me. When I first started watching Wrestling, the first wrestler that caught my eye was like AJ and before that, they all had kind of like two minute matches. There was one match on the card. It was a commodity match. Even me going to indie shows I remember g hearing, “Oh, are you guys ready for the eye candy? Are you guys ready for the woman’s match?” I don’t like that. Like, I think women are athletes and I feel like people are finally seeing it that way and it’s kind of being shown that way. We had NWA EmPowerrr and I thought that was amazing because there were so many of my friends from the Indies that I saw on there. It just makes me so happy because I feel like it’s possible now.”

On signing with ROH: “It brings me so many mixed emotions. It is my first contract that I’ve ever signed. And, as soon as I was brought into Ring of Honor, Maria was so welcoming. I think she could tell I was very nervous. She was like, “Hey, don’t be nervous. This is your home.” I just think this is the perfect place for me to be right now.”

On the “Forbidden Door” and if she’d like to see ROH embrace it as teased recently: “Yeah, absolutely. Hopefully! Like Maria said, there isn’t really a door here. So, who knows who might want to challenge me? And, maybe we can work with other places like maybe even AEW? Who knows? But, I would love to see that happen.”