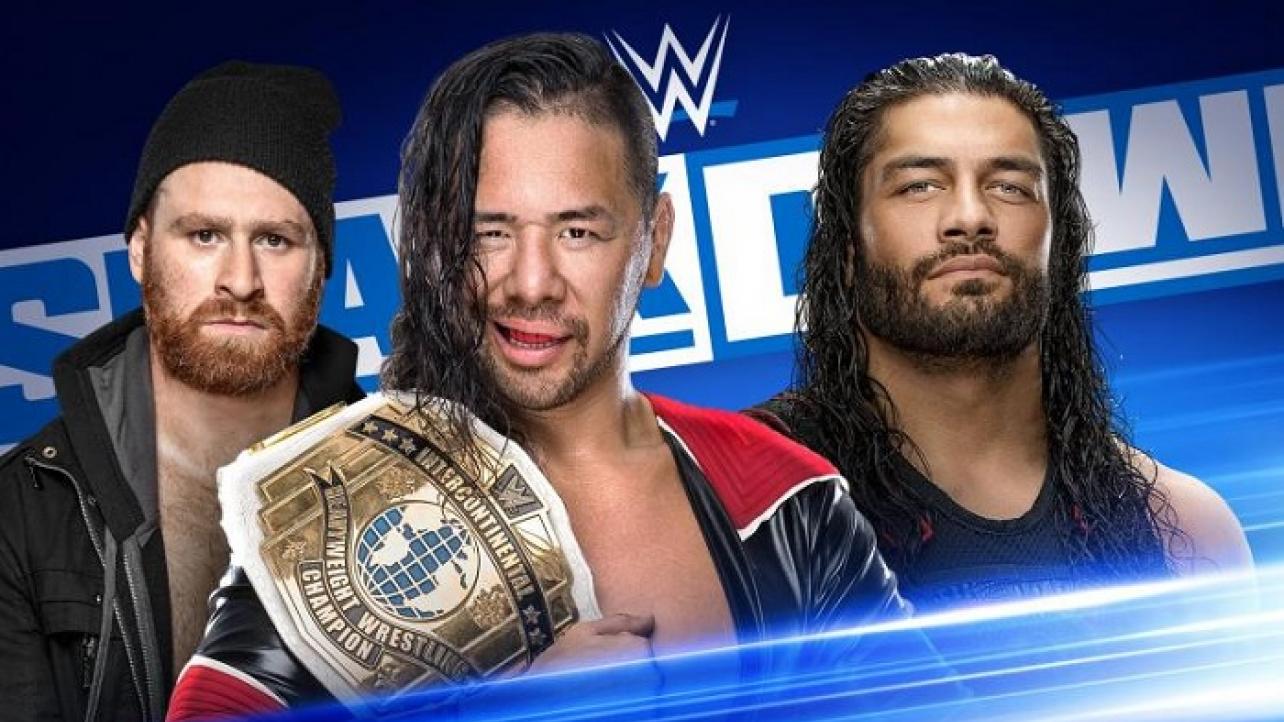 An Intercontinental Championship match has been confirmed by WWE for this week’s episode of Friday Night SmackDown on FOX following an interesting back-and-forth social media exchange between current title-holder Shinsuke Nakamura and Roman Reigns.

Things began when Sami Zayn took to his official Twitter page on Thursday morning to react to he and Nakamura being drafted to SmackDown in the third round of the WWE Draft.

“Nakamura-san [and] I were eligible to be drafted together [and] got picked in the [third] round by SmackDown,” wrote Zayn on Thursday. “Imagine being able to get a generation-defining performer AND the Intercontinental Champion together in one pick [and] still deciding to pick The Big D Roman Reigns first. Unreal.”

This prompted “The Big Dog” to take to his own Twitter page to post a response to Zayn.

“Don’t concern yourself with the Big D Sami,” wrote Reigns in response to Zayn’s tweet. “But if you and Shin want to go from [third] round to face [number one]…you know where to find me.”

He added, “And bring the [Intercontinental Title] with you. #BigDog #BigDeal #SmackDown.”

Finally, the champion himself, Nakamura, chimed in with his thoughts.

“Are we talking about same thing,” Nakamura questioned out loud in response to Reigns’ tweet. “If the Big Dog wants to play, I’ll allow him to come into #MyYard with #treats.”

This all built up to WWE.com confirming the title match for this week’s show in the following announcement released on their official website on Thursday afternoon:

After Shinsuke Nakamura fell to the third round of the WWE Draft, Zayn took exception and spouted off on social media about the disrespect for the champion.

Zayn’s tweet entered The Big Dog’s yard, and Reigns responded that he was ready to place the Intercontinental Championship back on his shoulder.

Can The King of Strong Style continue cashing the checks that Zayn’s mouth writes? Or will Reigns end Nakamura’s reign and begin his own championship run to kick off the new era of SmackDown?

Tune in for Friday Night SmackDown on FOX at 8/7 C to see the thrilling Intercontinental Championship Match.

Check out the aforementioned tweets from Sami Zayn, Roman Reigns, Shinsuke Nakamura and the official announcement tweet from WWE about the I-C title match on SmackDown this Friday night below.
Make sure to join us here at eWrestling.com on 10/18 for LIVE WWE Friday Night SmackDown On FOX Results coverage!

Nakamura-san & I were eligible to be drafted together & got picked in the 3rd round by #Smackdown.

Imagine being able to get a generation-defining performer AND the Intercontinental Champion together in one pick & still deciding to pick The Big D Roman Reigns first. Unreal. – SZ

⁉️Are we talking about same thing?
If the Big Dog wants to play, I ’ll allow him to come into #MyYard with #treats https://t.co/dcttC8xJE2