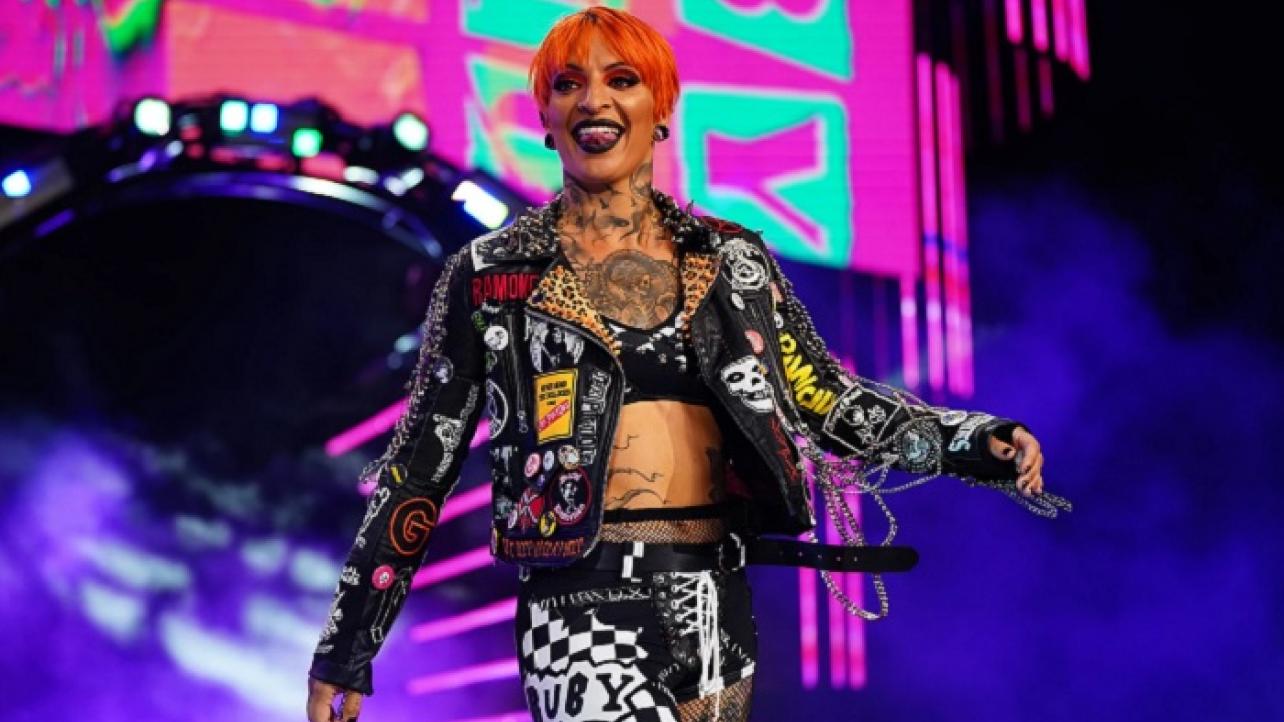 Ruby Soho recently spoke with the New York Post for an in-depth interview earlier this week to promote her match against Jade Cargill in the finals of the tournament to crown the inaugural TBS Women’s Champion on the debut edition of AEW Dynamite on TBS.

During the interview, the AEW contender spoke about coming up short in her title opportunities in WWE, moving to Ohio on Sarah Logan’s farm, Liv Morgan’s recent title shot against Becky Lynch, as well as Big Swole’s criticism regarding Tony Khan and lack of diversity at the top of the roster in AEW.

Additionally, the women’s wrestling star discussed her critically-acclaimed intergender match against Josh Alexander at the AAW: Unstoppable event, her “Ruby Soho” theme by Rancid and how she never wants to let go of that song.

On having opportunities at titles in WWE that never came to fruition, specifically why she thinks she was never given a run with the women’s tag-team titles during her run as part of The Riott Squad: “Honestly, I don’t know. We had such a talented roster over there and so many amazing women. I just know that Liv (Morgan) and I at the time were just trying to be the best possible tag team we could be, and honestly that was some of my favorite times was being able to share a ring with her and be able to learn and grow with her. So I don’t feel like that time was wasted by any sense of the word. I learned so much about tag team wrestling during that time and I got to experience it with one of my best friends.”

On talking on Renee Paquette’s podcast about being a small town kid and moving in with fellow former WWE Superstar Sarah Logan in Ohio: “(Laughs) I tell a lot of people often I want you to picture that exact opposite of the lifestyle that you think I would live and that’s the lifestyle that I live. It was a pretty easy decision. I moved here in I believe February, probably closer to March of last year. I am godmother to Sarah’s son, Cash, and she asked me to be as much as part of his life as possible. I love that little boy to death and she is one of my best friends, so it was an easy choice and I was able to find this farm in the middle of nowhere and I was able to get horses and I have a place for my dogs to run around. I honestly have found this peace out here. When I’m at work, it’s go, go, go. It’s people all the time pulling me in different directions and then coming home it’s just this sense of calm that I think that I needed not just for myself, but my mental health as well.”

On being able to find peace and if there is something at the place in Ohio that she does, or a place she goes while there where she finds that peace: “There is a moment when I let all three of my horses out to this part of my farm that’s a big pasture. When they go out, all three of them together, they get very excited. Horses are herding animals so when they’re around each other a lot of times they’ll just run. They’ll run in circles and they’ll jump up and down and get excited to be out to this big area. There’s that moment right there where I see them at their most free, at their most exited. And I’m gonna get emotional talking about, that truly brings me to this place of peace that I can’t even explain.”

On Liv Morgan also living on a farm: “Sarah kind of spread the bug to all of us. She moved to a farm, the other two kind of followed.”

On Morgan coming up short in her attempt to capture the Raw Women’s Championship but still impressing her so much with her performance against Becky Lynch at WWE Day 1: “I couldn’t possibly be more proud of that girl. I’m going to get emotional if I start talking about it. She was kind of put into a position where she is now on her own when she always had one of us next to her to kind of guide her. She has taken that ball and run with it so fast, nobody can see her because she is thriving right now. She is coming into her own. She is finding herself. She‘s finding her voice and her in-ring ability is at the top of its game. I told her that after her match. It’s a pleasure and an honor to be able to watch and be able to say I was a small part of her journey to see where she’s at now because she’s a star.”

On Big Swole’s recent criticism of AEW for lack of diversity at the top of the rosters and how speaking from a personal perspective, she can’t relate to those sentiments about Tony Khan: “I can only speak from my personal perspective. My personal perspective and my experience has showed me with Tony (Khan), Tony giving me a lot of creative freedom to be able to be the exact person that I want to be and to represent myself the exact way that I want to be represented. That’s really all I can speak to and that’s the experience that I have is having my creative freedom that I was not granted before and to be trusted. I’m grateful for that and that’s something as a performer that I do not take for granted by any means.”

On her recent intergender match with IMPACT Wrestling star Josh Alexander at the AAW Unstoppable show and why it was so special: “It was my first return to the company that helped me make my name on the independents. AAW was a company that really took a chance on me. I was just a no-name girl from Indiana and that that company took a chance me and the company saw my growth over years and years and years of trying to get my bearings and really learn about myself, who I was and what I wanted to do. I came back five years exactly to the date of my last match on the independents, which was a complete accident by the way. But then being able to face someone like Josh Alexander that I have tremendous respect for, I think being able to face him and experience that, being able to main event that show and have the match with him is something that’s I’ll remember forever. It was a really beautiful moment.”

On the Rancid song “Ruby Soho” being so fan-friendly that it could make her a babyface performer for life, and if she would have to lose the theme if she turned heel: “I never want to let go of that music. It does what I feel entrance music is supposed to do for you. It really puts me in that mindset where I’m ready to take over the world, especially hearing the fans sing it along with me. It’s so empowering and so cool to know that the band has kind of knighted me in punk rock and Rancid’s been so cool and Lars (Frederiksen) has been so supportive and everything. Every time I come I feel so unbelievably lucky to use that as my entrance music, so regardless of where I am in the company I never want to let that go.”

Check out the complete interview NYPost.com.