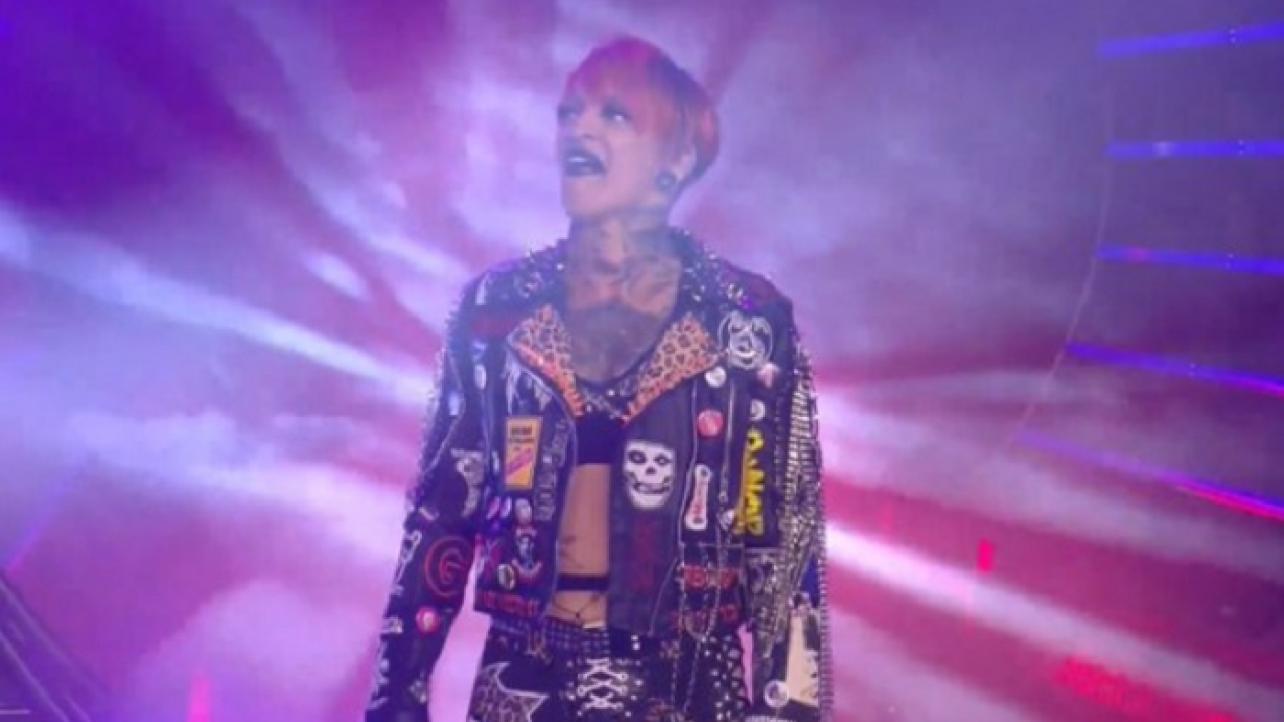 Ruby Soho Comments On Her WWE Release, AEW All Out Debut Appearance & More

Ruby Soho recently appeared as a guest on the Oral Sessions with Renee Paquette podcast for an in-depth interview covering all things pro wrestling.

During the appearance, Soho spoke about her WWE release, AEW debut at All Out, being surprised by Sarah Logan at the event and more.

On her WWE release being difficult to take and her friend Sarah Logan helping her through it: “Full blown panic attack,” Soho said of being released. “It was just unexpected, it was super unexpected. I did not see it coming by any means. I probably wouldn’t have bought a house (if I had). But I’m very happy that I did and that it all happened in the time that it did. But I definitely had full blown crying and freaking out, and I ate a couple boxes of Oreos. Just had a full blown meltdown. Thank god Sarah was immediately (there). I called her ‘hey, I got fired.’ ‘I’m on my way.’

“And she just came and gave me the biggest hug. Thank god for her, because I was freaking out. And I went through waves of that over the 90 day time period, of ‘oh no I’m good. I’m going to be fine.’ Then I would panic, then I’d be like ‘oh no I’m going to be fine’ and then panic. It was waves of it that that just kept coming. But right now I’m just so happy with how things have played out and how things have fallen into place so perfectly. I’m not mad at all.”

On not regretting buying herself a house shortly before her release: “I knew that one of the steps in buying the house, whenever I bought houses previously it had been when I lived with a family member or for the guy I was dating at the time, or whatever,” Soho said. “I had never bought a house for me. And this was the first step in buying something for me, buying a home for me. And then I kind of wanted to just be like ‘okay, I made that step. Now the decisions I make going forward, especially now having been released, I have to start making choices for me. I have to start being selfish a little bit.’

“I love helping. I wanted to take care of my family and now that I was financially able to when I was in WWE, I did a lot of that. But I didn’t focus on myself a whole lot. So that’s pretty much what I spent the next 90 days doing, is building a life for me when I wasn’t involved in wrestling in some capacity.”

On being surprised and overwhelmed by the crowd reaction to her All Out debut, winning the Women’s Casino Battle Royale and Tony Khan’s reaction to it: “I thought I knew what nervous was,” Soho said. “But it was so much of my own anticipation, having known what I was going to be doing and thinking about it over and over for a few months and everything. Then getting there and meeting everybody or seeing everybody again was awesome, and I was just like ‘okay, this is the first step. I can’t make this up. I can’t.’ I played it over and over again in my head. Any time I listen to the song, I play it in my head and hope that ‘oh man, I hope that this is the reaction that I really want.’ I didn’t expect it, I just hoped for it. When I was at the bottom of the stairs and they started chanting ‘Ruby Soho!’ before I had ever came out, I was looking up and I looked down at every body and I’m about to cry in this moment. Tony (Khan) pops up from the other side of the screen and goes ‘LET’S GO!’

“It was the best. I couldn’t believe, first of all, that they were chanting for me, that that’s who they wanted. Secondly they were chanting a name I hadn’t even called myself yet, and that was amazing. I told Giancarlo ‘thank you so much for helping me do those videos, cause that helped the spark of letting people know this is what I wanted to be called.’ Everything had fallen together so perfectly, and then when my music hit and I came out, the reaction on my face is every ounce of genuine, real, authentic. I could not contain how happy I was in that moment. I just wanted to live right there forever, cause I couldn’t believe the reception that I got. I just couldn’t believe it. I was just like ‘wow, these people are excited that I’m here. And I’m so excited to be here. We’re sharing this moment together.’ And then hearing ‘Ruby Soho’ behind me was unbelievable, because I’m like ‘wow, this is my love for punk rock and my love for pro wrestling. Something that’s built who I am as a person coming together for this one perfect moment.’ I came to back afterwards, I was like ‘Tony if you want, I can retire. I can be done after that.’ He was like ‘you’ve got stuff to do!’”

On being surprised by Sarah Logan at All Out: “Funny story, I got pulled over on the way to the show. So I was fifteen minutes late,” Soho said. “I was so excited, I was so excited that I was speeding like a mad woman. I got pulled over, got a ticket. But I’m like freaking out and I’m trying to calm myself down because I’m fifteen minutes late. And I’m texting Sarah at different points going ‘hey girl, I was going to call you, but I’m just trying to stay focused and be calm right now. I’ll text you when I get to the venue.’ And she texts me back and said ‘I’m here for you.’ I’m my head I’m like ‘she’s here for me. That’s so sweet of her.’

“I get to the venue, I have a hood on and everyone’s trying to sneak me in and whatever. I’ve got a bag and I’m so flustered because I’m late and I’m excited. And I open the door and she’s the first person I see. And she has Cash with her. I just start bawling and I just like hugged her and I grabbed Cash and I just held him. I was like ‘why are you guys here?’ She said ‘I said I’d be here for you.’ She apparently had it planned for awhile, and she’s terrible at keeping secrets, so she almost spilled it three or four times. But yeah, it was amazing. She’s always been there for all of our milestones in our career. We’ve been together since we first started, so for her to be there just made it all that more special.”

On this being an opportunity to prove herself to the fans that she is worthy of the reception they gave her coming into the company: “This all happened way faster than I ever anticipated,” Soho said. “I only got here a couple weeks ago. So I know I have no time to waste, I have to prepare as much as humanly possible. And it’s been a long time since I’ve had that high caliber of a match. I need to prove to myself that I can do it, because it has been such a long time since I’ve had such a high caliber singles match that I can really prove to myself and hopefully everyone else that there was a reason they were all excited to see me. There’s a reason that I have so much more to offer, there’s a reason that I’m here in this moment and this time, and it’s to prove that I still got it. And I hope I can, I honestly hope I can. I’m so nervous, I’m so nervous. But I’m excited.”

Ruby Soho Comments On Her WWE Release, AEW All Out Debut Appearance & More