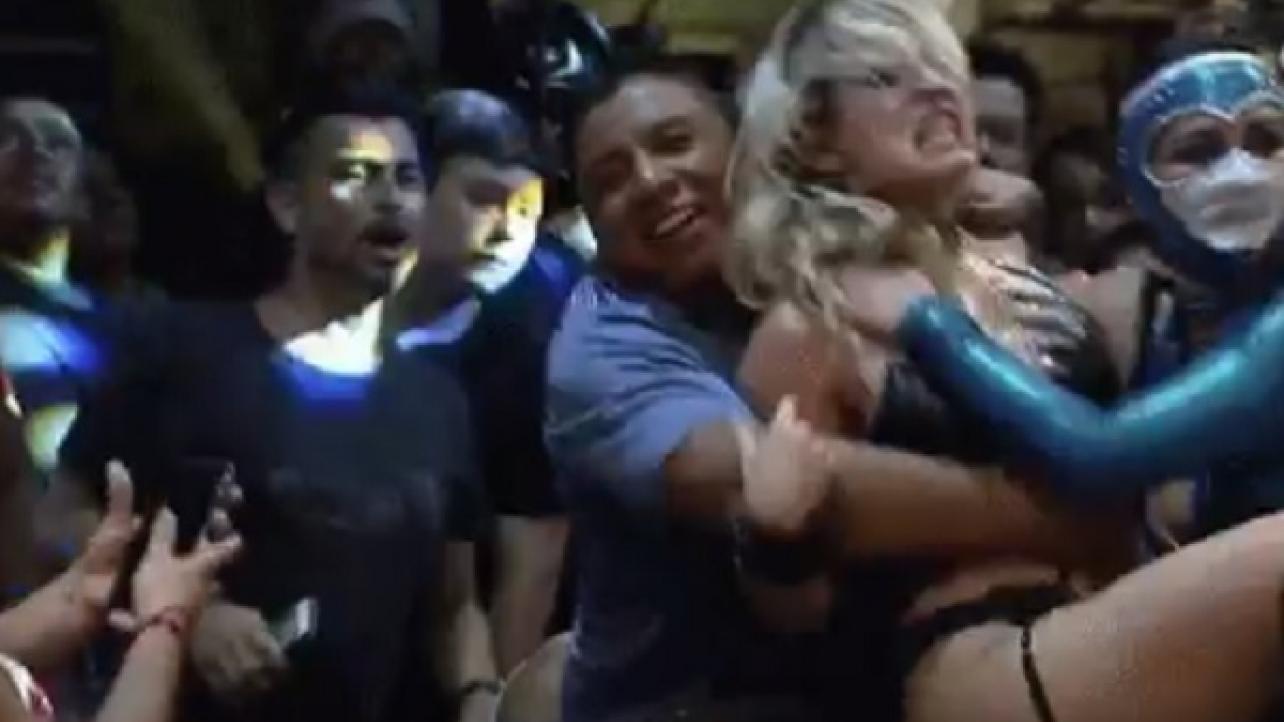 Scarlett Bordeaux/Fan Incident At AAA Show (Video); Bordeaux Goes Back & Forth With Fans

Add yet another fan-wrestler incident to the growing list in recent weeks.

At the AAA Verano de Escandalo 2019 event on Sunday evening in Merida, Yucatan, Mexico, which also featured the Lucha Bros recapturing the AAA Tag-Team Championships by defeating The Young Bucks in the main event, Scarlett Bordeaux was grabbed by a fan during a match.

Bordeaux partnered with Lady Shani and Taya Valkyrie in a six-woman tag-team match against the trio of Chik Tormenta, La Hiedra and Tessa Blanchard. As the Impact Wrestling Knockout and pro wrestling veteran was getting back to her feet on the outside of the ring during the contest, an overzealous fan reached over and grabbed her from behind.

This led to her partner, Lady Shani, helping to pull her away from the barricade and the fans, and back to the ring.

After the show, Scarlett Bordeaux took to social media to comment on the incident.

“It is NEVER okay to touch a performer without their consent,” Bordeaux wrote via her official Twitter page (@Lady_Scarlett13). “I didn’t realize what happened until I watched the footage afterwards being so in the moment after a dive with my back turned otherwise I would have reacted much differently.”

Bordeaux added, “[Thanks] to [Lady Shani] for having my back.”

please do not try to keep the wrestlers pic.twitter.com/f6VtwmToMY

This led to a back-and-forth exchange involving Bordeaux and several fans talking about what is and isn’t appropriate interaction between fans and pro wrestlers at live events.

Bordeaux was criticized for dressing in such a way that provokes this kind of behavior, which, of course, she took exception to.

Check out the tweets related to the Scarlett Bordeaux incident at the AAA Verano de Escandalo 2019 event in Mexico on Sunday evening, including videos and photos of the incident itself above and below.

It is NEVER okay to touch a performer without their consent. I didn’t realize what happened until I watched the footage afterwards being so in the moment after a dive with my back turned otherwise I would have reacted much differently. Thnx to @LadyShaniAAA for having my back https://t.co/2YKT64sKIj

Just a final thought. If you wouldn’t want a stranger to grab you on the street, don’t do it to a wrestler as they’re putting their bodies on the line trying to entertain you. To the few who tried to justify this persons behavior-

What I wear is completely irrelevant. Could be a string bikini or a snowsuit, it doesn’t matter. My body is mine and you cannot touch me without my permission. Most fans I encounter are respectful, awesome people and I appreciate you.

That’s not entirely accurate. Scarlett is a bit more complex than that. My character is someone self-liberated beyond other people’s subjective opinions on how a person should dress, behave and act. Sexy is subjective. I dress how I like. https://t.co/3jvqUu39Wi

Sounds to me like you dont respect women unless they fit YOUR standard of what they should be. If someone finds the way I’m dressed attractive. It doesn’t give them the right to do whatever they want to me. Your lack of self control doesn’t mean you can violate whoever you please https://t.co/qX5TuuGgv6

Scarlett Bordeaux/Fan Incident At AAA Show (Video); Bordeaux Goes Back & Forth With Fans