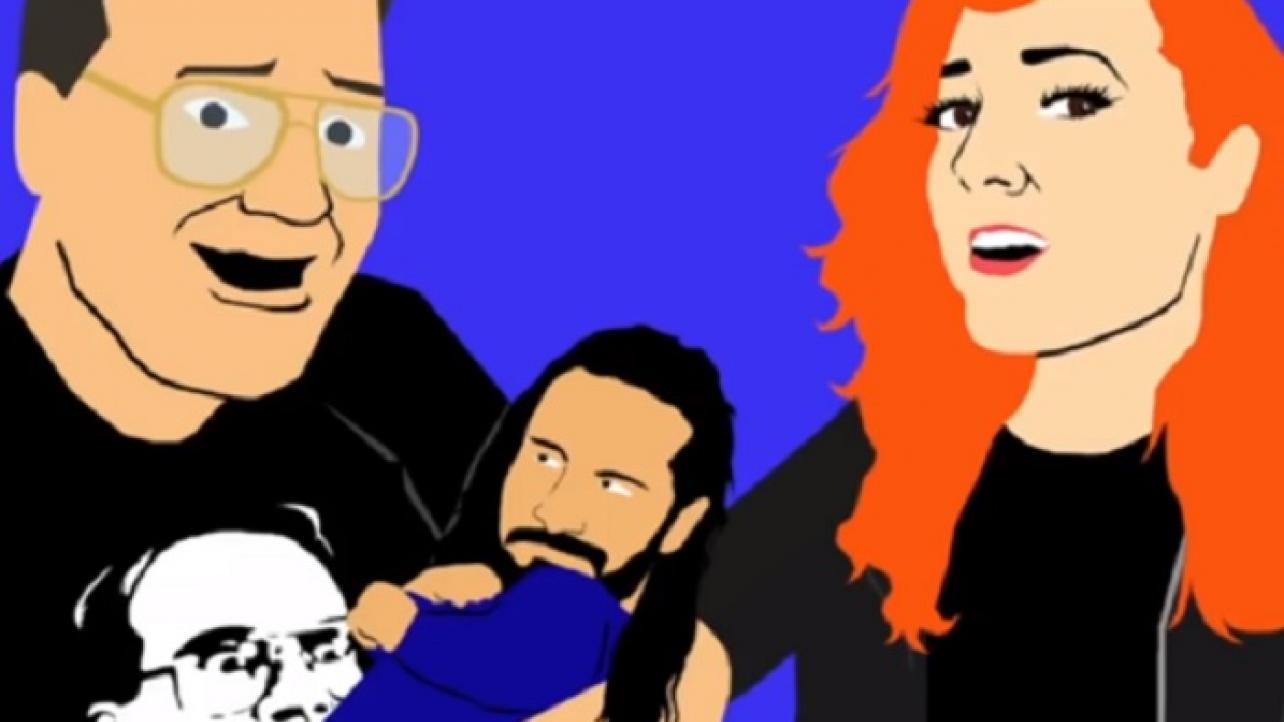 Seth Rollins recently reacted to the controversial comments made by Jim Cornette about he and Becky Lynch’s announcement that “The Man” is pregnant with the WWE power couple’s first child, which led to an additional verbal onslaught from the former tennis racket-toting pro wrestling legend.

WWE Superstar Seth Rollins recently appeared on “After The Bell” with host Corey Graves and during the discussion, “The Monday Night Messiah” fired back at legendary pro wrestling figure Jim Cornette for his recent criticism of Becky Lynch getting pregnant.

Rollins addressed the comments made by wrestling personality Jim Cornette, who criticized former Raw women’s champion Becky Lynch for leaving WWE to have a baby.

For those who missed it, Cornette stated the following on his Jim Cornette Experience podcast:

“You can’t always be on top of the wrestling business in a $1 million a year spot or more, but you can [have a baby] — what is she? Can she be 30? [Lynch is 33] Well, still she’s got many more years before the f*cking Easy Bake Oven gets shut off. She can have all those problems like a descended stomach and stretch marks and hemorrhoids and hormones problems and mood swings and all those other joys of motherhood later on WHEN SHE AIN’T MAKING A MILLION DOLLARS A YEAR!!!She’s got plenty of time left. What would you do if your wife came home and said instead of making a million dollars next year I’m gonna basically just be a raging bitch for the next nine months and then give you more sh*t to worry about around the house?!”

Rollins, who is engaged to Lynch, fired back at Cornette calling his comments misogynistic, out of place, and states that he will not forgive him.

“I don’t really want to take too much time to get into it because, you know, I don’t want to focus on it. It hurt my feelings on a personal level because Jim Cornette is someone who is a legend in our industry, he is someone that I’ve personally worked with in my time at Ring of Honor, and for him to come out and say some real negative things, some real misogynistic things about women in general and pregnancy in the industry, it kind of caught me off guard. It made me lose a lot respect for someone that people have already lost respect for, and I was holding on to hope that somewhere along there was a personal connection between Jim and I that he would twice before making some egregious comments about women, about my wife… I can’t even forgive him.”

You can check out the complete Seth Rollins interview from the WWE After The Bell with Corey Graves podcast at Apple.com.

In an additional update, Cornette later commented on the reaction to his comments about Lynch’s pregnancy in a follow-up episode.

Check out the latest from ole’ Corny via the following clip from his Jim Cornette Experience podcast embedded below.

Check out a complete timeline of the Seth Rollins and Becky Lynch from the very start through their engagement and pregnancy announcements via the following photo galleries chronicling their journey together: