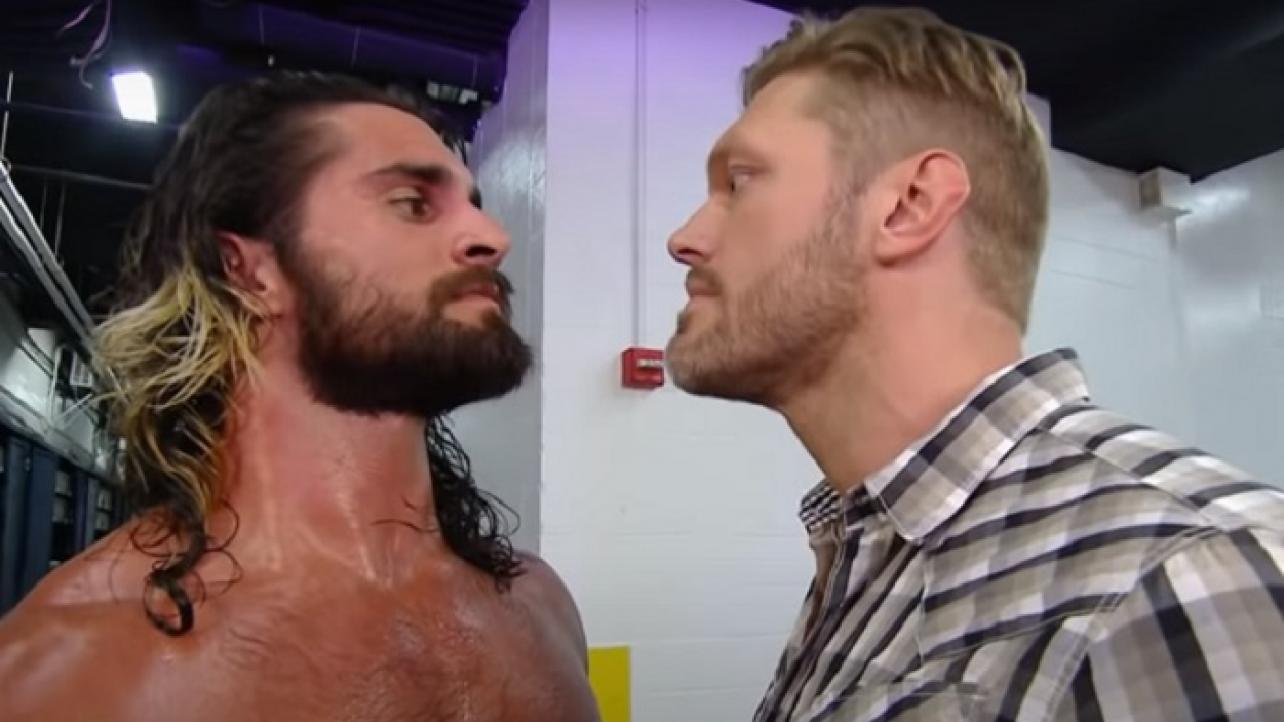 It looks like “The Monday Night Messiah” has his sights set on a rivalry with “The Rated-R” Superstar, as Seth Rollins recently made it clear that he wants to work a program with Edge after he wraps up his current business with WWE Champion Drew McIntyre.

During a recent media call to promote this Sunday’s WWE Money In The Bank 2020 pay-per-view, where Rollins is scheduled to challenge “The Scottish Psychopath” for the WWE Championship, he noted that he has “unfinished business” with Edge.

Rollins referenced Kane and Randy Orton being the guys who helped him get over as champion by working with him soon after he captured WWE gold, and said “it’s cool” to be the guy who gets to work the first program with McIntyre after he captured the WWE Championship from “The Beast Incarnate” Brock Lesnar at WrestleMania 36.

“The Monday Night Messiah” spoke about the “unfinished business” he has with Edge stemming from the 2020 Men’s Royal Rumble match, where “The Rated-R Superstar” made his shocking in-ring WWE return. He also recalled “threatening” Edge on RAW and feels there is enough organic material to go with their abilities as talented performers to “tell a good story” for the fans.

Also during the call, Rollins spoke about Johnny Gargano, calling him a “special talent” and mentioned how they worked together prior to their runs with WWE, but pointed out that they are completely different talents now and that he hopes they get to work together again now that they are on the big stage in WWE.

He also touched on the “cinematic matches” WWE has been doing during the COVID-19 Pandemic, such as “Boneyard Match” and “Firefly Funhouse Match” that aired at WrestleMania 36, and will be doing again for the “Climb the Corporate Ladder” matches at this Sunday’s WWE Money In The Bank 2020 pay-per-view.

Check out notes from Seth Rollins’ media call to promote WWE MITB 2020 via the following tweets embedded from the Twitter feed of talkSPORT’s Alex McCarthy.

On a call with Seth Rollins.

Rollins is also asked about Johnny Gargano’s comments that he’d like to face him and Rollins called him a ‘special talent’. Says they worked together before WWE but are totally different talents now. He hopes they can work together on a bigger stage.

Rollins also praises the cinematic matches for being extremely well done thus far, but he hopes ‘we don’t get carried away and these matches become the norm. They need to remain special.’

Rollins tells me ‘it’s really cool’ to be the guy who works with Drew McIntyre first. He remembers what Kane and Randy Orton did for him to kick off his first ever world title reign in WWE and while he wants to beat Drew at #MITB, win or lose, he intends to help Drew learn.

He also REALLY let rip on how unhappy he was with what went down at #HIAC Vs Bray Wyatt and how that whole episode forced him to change his character.

He was as frank as I’ve ever heard him. You can hear it on #talkWRESTLING this Sunday, I won’t tweet it until after that.